PITTSBURGH — Economic development officials around the country are competing for Amazon’s $5 billion second headquarters, which promises 50,000 jobs to the chosen city, but the massive corporate project doesn’t seem like a prize to some longtime residents here, who worry the tech giant would do more harm than good.

Chants of “Whose City? Our City!” filled a room inside the Allegheny County Human Services Building on Saturday as more than 100 people gathered to discuss the potential implications of Pittsburgh’s bid for Amazon’s HQ2. City leaders and activists talked about housing affordability, transportation, and other issues, raising concerns about gentrification and displacement, particularly for people who have lived in the city for decades.

Pittsburgh is one of 20 finalists for Amazon HQ2, and while the city’s bid is considered a long-shot, the sentiment at the forum reflects a groundswell of concern in some of those cities. Citizens point to the large tax breaks being offered to the company by many cities, with a market value of $645 billion and a CEO, Jeff Bezos, who has become the richest person on the planet. 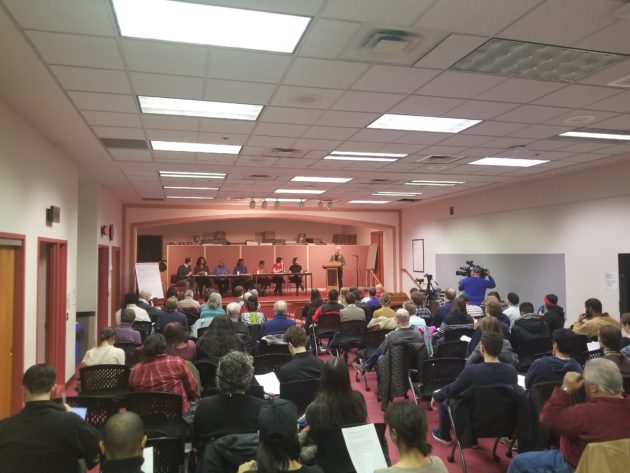 In Pittsburgh, one concern is that an influx of tech jobs with six-figure salaries will create more inequity.

Carl Redwood, an affordable housing activist and adjunct professor at the University of Pittsburgh who led the “Whose city? Our city!” chant, cited a history of declines in Pittsburgh’s African American population, in part because of rising of rents.

“There’s a battle already going on in Pittsburgh between the government that supports businesses like the Pittsburgh Penguins and Uber and Google and all these other companies coming into town, and the people who lived here for so long who can no longer afford to live in Pittsburgh or even in the Pittsburgh region,” he said. “If Amazon comes here, it will accelerate the battle and it won’t accelerate it necessarily in our favor.”

Redwood questioned the role of government as a business facilitator, offering incentives to corporations with the promise that benefits will trickle down to all citizens.

Redwood told the room, simply, “I don’t want Amazon to come to Pittsburgh.” After the forum discussion, he told GeekWire that there isn’t a clear understanding of how the average Pittsburgh resident will benefit from Amazon’s new headquarters. “Until we see that, there’s no reason to be supportive,” he added.

Pittsburgh leaders organizing the pitch for Amazon HQ2 are preparing to go to court to keep the details of the region’s bid private for now. At the forum on Saturday, several speakers and people in the crowd said those details and tax incentives must be revealed.

Mila Sanina, executive director at Pittsburgh-based investigative non-profit news group PublicSource, said residents should demand transparency, exercising their right to know how their tax dollars are being offered up in negotiations for one of the biggest economic development deals in history. She said Amazon’s project could potentially have “as huge of an effect as the steel industry had on this city.”

Other speakers talked about potential impact related to transit; the ability for workers at Amazon HQ2 to unionize; and the effect on a neighborhood like Hazelwood, a leading candidate for the HQ2 campus.

UrbanKind Institute and The University of Pittsburgh Human Rights Working Group hosted the forum. They held a similar event earlier this week focused on the impact of Amazon HQ2 on local universities and what a city like Pittsburgh can learn from how Seattle has changed due to Amazon’s growth.

The popular sentiment on Saturday differed from opinions at the Thursday forum, where some speakers said they wanted to land Amazon HQ2, but in a way that would benefit the community overall — avoiding the challenges that have arisen in Seattle as Amazon and other tech companies have grown.

Jackie Smith, a professor at the University of Pittsburgh who helped organize the events, said Saturday that she wants to give residents a voice at the table when politicians are making big economic decisions.

Even if Amazon doesn’t choose Pittsburgh, several people at the Saturday event said it’s important to start thinking now about how the community wants to grow with the tech industry.

“Amazon is the behemoth we are anticipating, but we really hope this discussion can be broadened to encompass all kinds of other development in the city,” said Jason Beery, a senior research and policy analyst at UrbanKind Institute.

As part of GeekWire’s month-long HQ2 initiative here in Pittsburgh, we drove around the city two weeks ago and asked residents in a variety of neighborhoods if they would want Amazon to build its second headquarters in their city. We received a range of opinions, and you can see the responses here.