From inside a lab at the University of Pittsburgh to a local Dunkin Donuts shop and finally to Major League Baseball, it’s been a quite the sports technology adventure for Diamond Kinetics.

The Pittsburgh-based startup launched in 2013, initially using technology to properly fit amateur baseball players with the correct bat. That idea evolved over the past five years as Diamond Kinetics developed bat sensors to help analyze a batter’s swing. The product is used by more than 15 MLB teams and 52 NCAA programs, in addition to thousands of younger players.

The latest chapter began this week as the company announced its latest innovation, PitchTracker, a smart baseball that measures velocity, spin rate, extension, time-to-the-plate, timing delivery and reach back to release, giving pitchers previously unknown information about their throwing mechanics. It uses the same sensor technology Diamond Kinetics developed for batters, but now it’s embedded inside of a baseball for pitchers.

As part of our GeekWire HQ2 coverage in Pittsburgh last month, I visited the company’s headquarters in the Steel City that sits just a few miles away from PNC Park and Heinz Field in one of the country’s most rabid sports cities.

Buddy Clark came up with the original idea for Diamond Kinetics after the Pitt engineering professor and youth baseball coach figured out a way to objectively measure a player’s swing and provide a bat size recommendation. But when he integrated additional technology from a colleague at the University of Michigan and later met Diamond Kinetics co-founder C.J. Handron, who became the company’s CEO, he knew there was potential to launch a startup.

“I realized there was more to this than fitting equipment,” Clark said.

Clark spun the company out of Pitt and began meeting Handron at their neighborhood Dunkin Donuts shop, three times a week. Soon they realized how capturing and quantifying motion could help baseball and softball players not only get a properly-fitted bat with objective data, but also improve their success on the field.

The company’s first product was a sensor that straps on the end of a bat and captures thousands of data points per second. It produces real-time 3D renderings of a swing plane and path, and provides assessment for speed, power, quickness, and control. The sensor also comes embedded in a bat made by Marucci.

“In the last three or four years, there’s been a huge shift going on with the way people think about the swing — are you swinging down through the ball? Are you elevating up at impact?” Handron said. “All of that is data driven.”

.@MonteLeeCU & @ClemsonBaseball have been doing some cool, cutting-edge things with technology this offseason

Pumped to get the 2018 season underway with #Clemson on Friday pic.twitter.com/5qDHBmVsGB

The idea is to give coaches and scouts more objective data on a player’s swing, versus relying on an eye test, for example, that leaves more room for error.

Teams and players are making changes based on the data. Handron said one MLB franchise drafted a player last year based on swing tracker data surfaced by Diamond Kinetics’ technology. 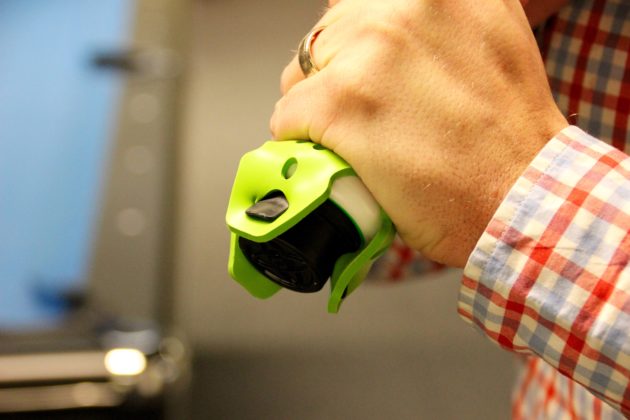 The company has separated itself from other sensor startups by offering deeper metrics, guided instructional content, and cognitive training tools in partnership with Axon Sports, Handron said. Its focus on just two sports — baseball and softball — has helped, as does targeting amateur players and teams that can’t invest in more expensive technology infrastructure. Giving younger players something that can improve their skills is part of the company’s mission.

“You can go on YouTube or Google baseball hitting drills, but you’ll get overwhelmed with stuff that runs the gamut,” Handron said. “The ability to use data to help inform that process and then ultimately deliver some of the tools to help make it go is at our core. If you can get better faster, that’s obviously a good thing for the player, and it’s a good thing for the game, too.”

Clark, who earned his PhD in mechanical engineering in 1991, said different scenarios during a game call for specific types of swings. He said data from Diamond Kinetics, used in combination with a coach, can provide real value for a player.

“Just knowing what swing I should have to get a certain outcome, that’s half of the problem,” he said. “The second half is how do I train to get that. We’re working on both of those fronts.”

Technology has dramatically changed baseball over the past few decades, dating back to Moneyball and now with cloud computing helping power services like StatCast. Handron said Diamond Kinetics is the “next generation” of Moneyball that is all about performance-based data.

“We’re entering the performance technology stage that is much more about the controllable or actionable things —  how we teach the swing and how we then marry that together with outcomes,” Handron said.

MLB players can use the strap-on sensors during batting practice, but not games. The company’s technology is approved for use in Gulf Coast League and Arizona Summer League games, as well as for NCAA softball, Perfect Game, and PONY baseball and softball. Handron expects more in-game use at various levels over the next two years.

Diamond Kinetics employs 18 people with plans to add another 10 this year. It has raised $5.7 million, all from Pittsburgh-area investors.

Handron said the company couldn’t have reached this level of growth had it not been for starting and staying in Pittsburgh. He noted the top tech talent from local universities like Carnegie Mellon University and Pitt; having a city rich with sports history and culture; and being in a smaller market, which has a lower cost of living and also helped the company “jump up and down loud enough.”

The co-founders believe Pittsburgh has the potential to become a sports tech R&D hub, given the city’s growing technology scene, its three pro sports franchises, and the collaborative nature of the community.

“The pieces are there, the enthusiasm is there,” Clark said.

Other entrepreneurs in Pittsburgh agree. Priya Narasimhan is the co-founder of YinzCam, a Carnegie Mellon spinout that provides mobile app support and other technology to more than 170 pro teams worldwide.

“I couldn’t have done this in any other city,” Narasimhan said.

Crucial to YinzCam’s success was an early partnership with the Pittsburgh Penguins, which allowed the startup to test its technology at the team’s new hockey stadium in 2008.

The Penguins also work with University of Pittsburgh Medical Center. The two organizations helped create the UPMC Lemieux Sports Complex, the first facility of its kind to combine an NHL practice rink with a full-service medical center specializing in sports medicine and a cutting-edge performance training center.

“The Penguins have taken advantage of some uniquely Pittsburgh connections – namely Carnegie Mellon University and the University of Pittsburgh Medical Center (UPMC) – to burst to the forefront of cutting-edge sports technology,” said Penguins President David Morehouse. “In many ways, it could only happen here.”

UPMC, meanwhile, also has a world-class sports medicine concussion program. CMU has a sports analytics club that ran a conference last year. Pitt, which ranks among the top U.S. schools in terms of federal research funding with $760 million provided annually, just launched a Performance Innovation Tournament designed to bring together the athletic department with Pitt researchers.

“There are really not many universities in the U.S. that are in a Power 5 conference, top five in NIH-funded research, connected to a globally-recognized healthcare system, and found less than five miles from three professional sports franchises,” said Evan Fancher, interim director at the Pitt Innovation Institute.

Other sports tech startups in the region include Vibrado Technologies, Hustle With Us, and ANGLR. Sports apparel and gear giant Dick’s Sporting Goods is headquartered 30 minutes outside of downtown Pittsburgh.

Many point to the Bay Area, Los Angeles, or New York as more robust sports tech hubs. Pittsburgh could use more investors, another professional franchise, and just more people in general. But the sports and tech innovation going on inside the Steel City doesn’t seem to be slowing down anytime soon.

“I want to see this as one of those sports tech epicenters, because there’s not really one at this point,” Handron said. “There’s not a place that’s been able to really say, ‘hey, if you’re a sports and technology company, this is the center of your universe.’ Whether it’s here or somewhere for five years from now, you’re going to see the engine of sports technology living in a city.”