Think differently. Limit dependencies on other platforms. Stay focused on a small set of key KPIs.

These are some of the early lessons learned for Andrew Wright and his team at Blok24, a Seattle startup that shut down this week.

The company’s closure marks the final chapter in a tumultuous ride that included an exciting launch last year, a complete rethinking of the product after a hail mary attempt to stay afloat, and an unexpected move by Facebook that eventually led to the decision to close up shop.

Wright, a longtime Seattle technology executive and entrepreneur, was an original Blok24 investor. He provided a crucial bridge financing in October 2017 to keep the lights on and then took the reins as CEO, giving himself and Blok24 one year to turn things around with the support of an additional financing round.

Blok24 started as a local events app, helping Seattleites find things to do. People loved the product but there weren’t enough users, so Wright and his team came up with a new idea to bring restaurants and bars onto the platform.

Monthly users and engagement went up. Customer acquisition costs were going down. Blok24 was developing new features such as “hyping” and “video vibe” to bolster the app experience. The rebuild was going pretty well. 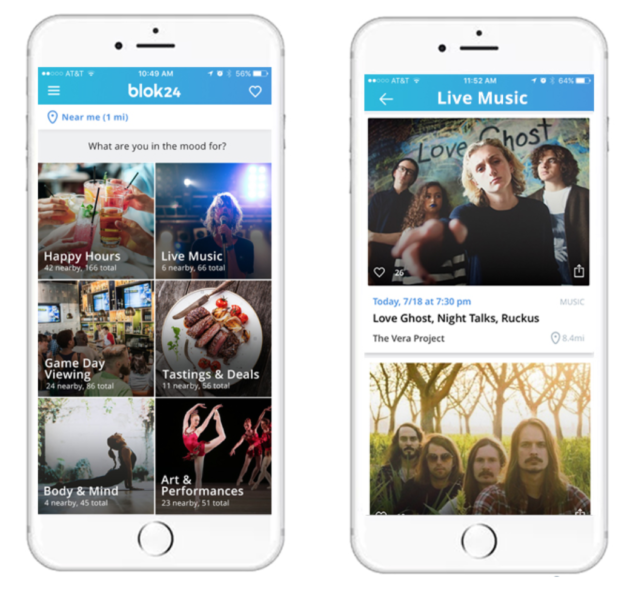 But in April of this year, a small tweak by Facebook delivered a big blow.

Blok24 relied heavily on Facebook’s Events API to provide content on its app. On April 24, Facebook made a change to that API, restricting third party services such as Blok24 from importing Facebook event data. It was part of a series of changes to restrict data access on Facebook following the Cambridge Analytica crisis and other privacy-related problems.

Events API: Until today, people could grant an app permission to get information about events they host or attend, including private events. This made it easy to add Facebook Events to calendar, ticketing or other apps. But Facebook Events have information about other people’s attendance as well as posts on the event wall, so it’s important that we ensure apps use their access appropriately. Starting today, apps using the API will no longer be able to access the guest list or posts on the event wall. And in the future, only apps we approve that agree to strict requirements will be allowed to use the Events API.

Blok24 was ingesting more than 2,500 Facebook events per week. That number suddenly dropped to zero, creating a massive content problem for the startup and other developers who were also using the API.

The startup spoke with senior Facebook employees and tried to find an alternative way to get event-related content, but it never panned out.

Wright said he understood Facebook was in a tricky situation, but that didn’t make it any easier for Blok24.

“It was very stressful,” he said. “When you have a company like that who is changing things basically everyday … they were in panic mode, frankly, and we bore the brunt of it.”

Wright admitted that the company was too dependent on Facebook as a bootstrap.

“The Blok24 concept was a compelling concept but it could be argued that if it was more differentiated at the start, we would have been able to withstand the loss of a dependency,” he said. “I have competed in big markets with large competitors for years and I love doing it, but next time I am going to make sure that I am sufficiently different so that one or two unexpected moves from competitors won’t result in a crippling blow.”

Other companies have also found themselves in a similar situation. Digital publisher Mic laid off a majority of its staff last week; Recode reported that Facebook canceled a news video series with the site, removing a crucial source of revenue and scaring away potential investors and acquirers.

Seattle startup Socedo closed in June after Twitter made changes to its own third-party APIs.

Wright also believes there’s another reason why Facebook is not opening up its event data anymore.

“Millennials aren’t using Facebook nearly as much as they used to and one of the only things they are using it for is events,” he explained. “…They are holding on to that data because it drives engagement for Facebook.”

“Those things, to an extent, cannibalized our value proposition,” Wright said of the competing products from tech giants.

Blok24 tried tapping into other event data sources but was unable to offset the drop in content from Facebook.

Another problem for Blok24: getting users to keep using the app. The restaurant and bar-related content weren’t enough to boost Blok24’s one-week retention rates, or the number of users who come back the first week after they install the app.

Blok24 never generated revenue and planned to monetize the app after a certain level of user growth. It followed a similar playbook to OfferUp, a fellow Seattle-area company that has grown into the industry-leading used good marketplace app. In fact, OfferUp co-founder Arean van Veelen sat on Blok24’s board.

“We tried basically everything. We innovated like crazy,” Wright said. “We just couldn’t move the retention. It primarily was a content issue and secondarily a value proposition versus what Google and Facebook were doing.”

Wright, who previously started RealNetworks’ RealArcade business and sold Seattle e-card startup Smilebox for $40 million in 2011, said Blok24’s shutdown is even more painful because of its mission to help people — specifically millenials — get off the couch and off their phones and connect with each other in person.

“It’s one thing to develop a mobile app to do something and have some fun, but this was pretty meaningful and important to that generation,” he said. “It’s just sad we weren’t able to make a further impact on people’s lives.”

Wright was in a similar situation with another Seattle startup he backed called Ripl. In 2015, when the company was struggling, he stepped up as executive chairman and helped rethink the company’s business. It rebounded and went on to raise a $3 million round a few years later.

Blok24 was co-founded by Troy Frever, a startup vet who remained at the company as chief technology officer. Ex-CEO and co-founder Yuval Hamudot left the startup when Wright took over last year. The company employed seven people.