Studies show that millennials value experiences over things and are willing to put their discretionary cash toward activities. Blok24 is banking on it. That coveted demographic is the target audience of the new app, which connects people with events and experiences happening in their neighborhoods over the next 24 hours.

Blok24 co-founders Yuval Hamudot and Troy Frever came up with the idea when they were both working at Smilebox. They didn’t think there was a good, user-friendly tool that would help them find something to do nearby, within the next few hours.

“These decisions tend to be made today, mostly word of mouth,” Frever said. “You can get online and try to find things to do but it’s kind of hard. Mostly what you come up with are directories of places.”

Blok24 has raised $450,000 from Ripl Chairman Andrew Wright, OfferUp co-founder Arean van Veelan, Pioneer Square Labs Managing Director Geoff Entress, and a handful of other angels. Wright is serving as Chairman of Blok24 and van Veelen is a strategic advisor. 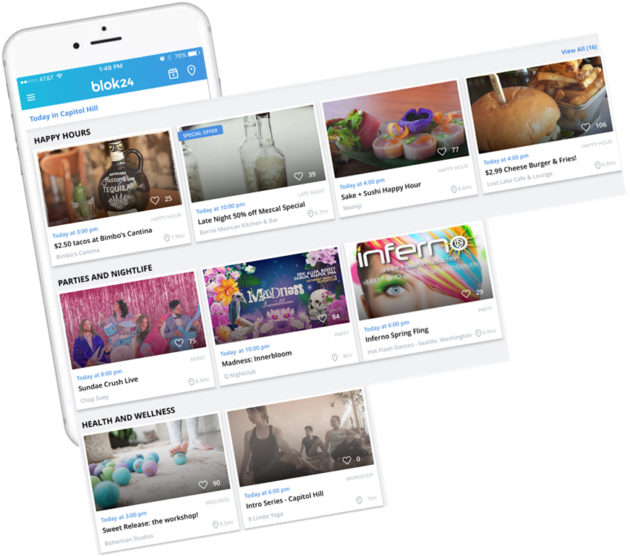 The five-person team will use the cash to develop Blok24’s product and scale its audience.

Right now, Blok24 is focused on Seattle’s Capitol Hill neighborhood. The startup has partnered with nearby businesses like Barrio, OOLA, and Pie Bar. Blok24 will be free for users and businesses while the app is in building mode. Eventually, a freemium model will be introduced that will allow businesses to pay a subscription fee for additional features.

Blok24 launched in late September and has since grown to 3,000 monthly active users, according to Hamudot. The startup has approximately 250,000 monthly post views and plans to expand to surrounding neighborhoods soon.

“We’re hearing that [users] are surprised by how many things are going on around them they had no idea about,” Hamudot said.

Hamudot isn’t worried about competition from industry titans like Facebook or Yelp because he believes Blok24 solves a different problem.

“People go to Facebook to get updates from their friends,” he said. “Businesses are injecting themselves into this ecosystem in a pure advertising context. Yelp doesn’t allow easy differentiation from other 4-star venues. Groupon attracts only coupon-seekers and doesn’t create loyal customers. It’s all about reaching the right people at the right time — locals looking for things to do today.”