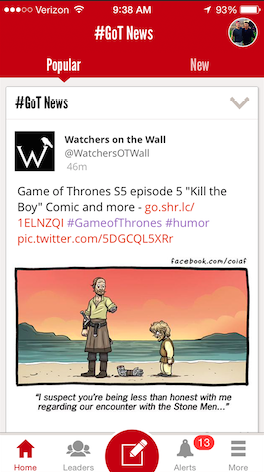 Over the past two-and-a-half years, Fanzo had built a unique app that aggregated social media chatter to help sports fans keep up with the latest news. But by early 2015, it was clear that the Seattle startup was still a long way from creating a sustainable business that had millions of users and a legitimate revenue stream.

The company’s executive team was faced with a common startup dilemma: Stick with the original plan and grind it out, or leverage the already-built technology for a new idea.

Fanzo elected for the latter, and so far, it’s been a promising few months for the 8-person company that just raised an additional $750,000 to go after its new plan.

While the original Fanzo app was a home for sports fans, the new idea is to create a home for social media influencers — both within the sports world and in other verticals like TV, movies, fashion, technology, and more.

To sustain its own business, Fanzo plans to help these influencers — those that have a big social media following — leverage their online base to make money. It plans to do this with a new platform which lets influencers accept offers from brand marketers and earn cash for sales they help create from a given social media post.

For example, if you’re a Mariners fan with 100,000 followers on Twitter, you may get an offer from Fanatics to post a link for a Mariners jersey with a discount code. For every follower who clicks on your link, uses the code, and buys the jersey, you get a chunk of that sale — a small portion of which is also shared with Fanzo.

Put simply, Fanzo is helping turn “social media stars” into affiliates, enabling them to monetize their influence. The company is still utilizing its original technology, which used algorithms to identify social media influencers and created a community around them, but is broadening its reach and applying a new business model.

“We want to help celebrate the people who are creating content and are passionate about a certain topic, and help them by doing all the things we were doing before — helping them be in the know, connect with a group of like-minded fans, and feel a sense of achievement,” said Fanzo co-founder Paul Ingalls. 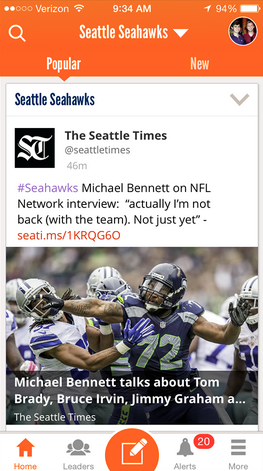 Ingalls said that Fanzo wasn’t “moving as quickly as we wanted it to,” and the team looked at different ways it could apply its core technology.

“As a result, we came across this new model which we think is pretty interesting,” he said.

Fanzo tested its new idea with a Game of Thrones app two months ago, targeting influencers in that vertical and presenting affiliate marketing offers. The results have been encouraging.

“Our experience so far been very positive,” Ingalls said. “Now we have good sense that we can gradually move beyond sports.”

As a result of the new idea, Fanzo co-founder Dana Dyksterhuis has stepped down. She told GeekWire that it was simply “time to move on” and pursue her other interests.

“It’s an incredible, life-changing journey to build a startup from scratch and I’m proud to have done this with Paul and the team members who joined us,” said Dyksterhuis, who created Fanzo after meeting Ingalls at a pitch event and remains a major Fanzo shareholder.

Meanwhile, Andrew Wright, an original investor in Fanzo, is joining the team as executive chairman and will be working with Fanzo for four days a week.

“I have 12 companies I’ve invested in over the last couple years, but this was such a big opportunity when we got it down on paper,” Wright said. “I really wanted to help do this.”

Wright and Ingalls have a years of experience working together at places like RealNetworks and Smilebox, a photo-sharing startup he founded and sold for $40 million in 2012.

“We have experience doing content businesses, and sharing back revenue with creative people who create content,” Wright said. “That’s our plan here.”

The fresh cash comes was led by original investors like Wright, Geoff Entress, and Gary Rubens, while Rudy Gadre also re-upped. However, Fanzo’s new idea sparked interested from additional investors like Andy Liu, Charles Seybold, and Charles Fitzgerald, who all participated in the $750,000 round.

Fanzo has raised $2.2 million to date.