Acting on a reader tip, GeekWire this morning found a blue Amazon Locker inside the Chase branch at the heart of Seattle’s South Lake Union neighborhood and Amazon’s sprawling urban headquarters. It sits below a Microsoft office that Amazon is taking over next year.

SEND US A TIP: Have a scoop that GeekWire should cover? Let us know.

The delivery station is designed just like the 2,800-plus lockers that Amazon has scattered around the U.S. that customers use to pick up their shipped items for no extra charge. However, this one has Chase branding — “Even more 24/7 convenience from Chase,” reads the wording on the kiosk, with the Chase logo just beneath. The branch is open from 9 a.m. to 6 p.m. on weekdays, but the locker is accessible 24/7 for those who have a Chase card. 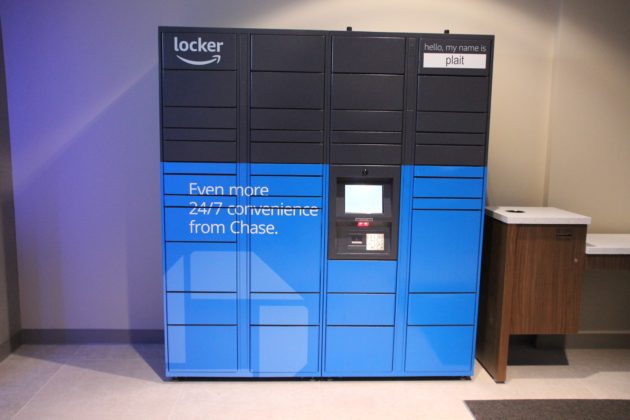 An Amazon spokesperson declined to provide further details about the Chase locker, and the extent of the rollout isn’t yet clear.

Amazon launched the Lockers concept seven years ago. The lockers are located inside and outside a multitude of retailers, from 7-Eleven’s to gyms to various grocery stores including Amazon-owned Whole Foods. They popped up inside BBVA Compass banks in Austin last year. Amazon has previously used the lockers as advertising vehicles.

The centralized pickup points help Amazon further speed up delivery times and offer an alternative to receiving packages at home or work, particularly for those concerned about package theft. 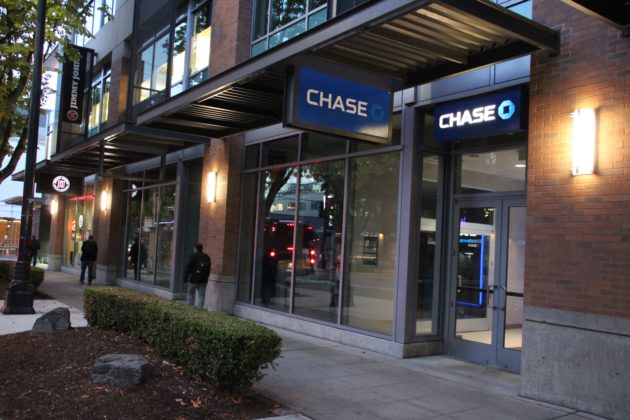 E-commerce competitors including rival Walmart also offer their own package pickup locations. AT&T just last week opened a new retail and coffee shop in Seattle that has a bank of lockers for online purchases.

As Amazon’s e-commerce sales continue growing — $27.2 billion last quarter, up 14 percent — it has added more and more delivery infrastructure. In addition to its massive warehouses, the company also now has its own planes, truck trailers, and delivery drones.

Amazon’s e-commerce dominance has caused many physical retailers to close stores, but the company is now ironically expanding its own physical retail footprint, ranging from its Whole Foods acquisition to the Treasure Trucks to bookstores to Amazon Go. This week Amazon debuted its newest store concept, Amazon 4-star, which stocks items with a rating above four stars on Amazon.com, as well as best-sellers and new and trending items.

Amazon recently started breaking out revenue from its stores. In the second quarter, Amazon reported $4.3 billion in brick and mortar sales, a small chunk of the company’s overall $52.9 billion in total revenue.