[Follow-up: We tried the new AmazonFresh Pickup service in Seattle, and this is what happened]

The broader launch of the AmazonFresh Pickup service, in Seattle’s Ballard and SoDo neighborhoods, also brings new details about how the pickup process works. Amazon says in an online FAQ that it “may use license plates to automatically recognize your vehicle when you arrive,” helping the company quickly match arriving customers with their orders. Customers can opt-out of automatic check-in from their settings.

That new detail helps to explain the high-tech signs installed at each parking spot.

In an order by GeekWire this morning, the AmazonFresh Pickup site didn’t ask for our license plate number. Instead, the system makes the match on site during a customer’s first pickup and then remembers the license plate for future pickups.

In addition, it’s now clear how Amazon will differentiate the service between normal Amazon Prime members and those who pay an extra $15/month for an Amazon Prime Fresh Add-on membership, which is required for the company’s grocery delivery service.

For the pickup service, Amazon Prime Fresh members will have an extra luxury — the option to pick up their groceries in as little as 15 minutes after ordering. Regular Amazon Prime members, who only pay for the base $99/year membership fee, choose from two-hour pickup windows on a first-come, first-served basis. 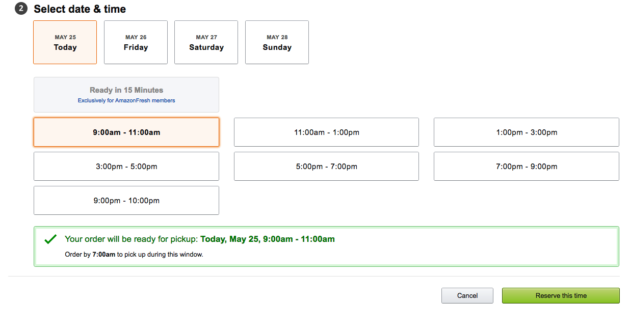 As you can see above, we’ve successfully placed our order for pickup this morning, and we’ll post about the experience later on GeekWire.

GeekWire first discovered Amazon’s plans for the pickup service via planning documents. AmazonFresh Pickup initially launched in March at the two Seattle locations, but it has been available only to employees until now. The company hasn’t given a timeline for any further expansion.

This is part of a broader push by the online retail giant into brick-and-mortar stores. Amazon has opened seven bookstores across the country, most recently in New York City, and the company has announced an additional six bookstores that are on the way.

The Amazon Go automated convenience store in downtown Seattle, unveiled last year, is still open only to the company’s employees, for the time being. The public opening of Amazon Go has been delayed amid reports of technical glitches in its automated system.