Amazon this morning confirmed what we’ve been reporting since last year: The technology giant is opening grocery pickup locations starting at two Seattle sites, allowing shoppers to order items online for pickup at designated times at an Amazon facility.

The new AmazonFresh Pickup service is the latest move by the Seattle company into brick-and-mortar retailing, but there’s a catch: For now, despite the high-profile locations in Seattle’s Sodo and Ballard neighborhoods it’s available only to Amazon employees as part of an internal beta. Once it launches publicly, however, Amazon says the service will be available to Amazon Prime members at no extra charge.

“AmazonFresh Pickup is a fast and easy way to order groceries, pick them up, and be on your way in minutes,” the company says in an FAQ. “Orders can be ready in as little as 15 minutes after they are placed. There’s no order minimum and the service is free for Prime members.”

Amazon has offered its AmazonFresh grocery service since 2007 in the Seattle region, before expanding nationally, but up to this point, the company has focused on deliveries to homes and businesses. AmazonFresh Pickup will compete with a growing number of “click and collect” pickup services at traditional grocery stores, including one at the Fred Meyer just a short drive away from the Ballard location.

Both stores include a wood-paneled physical store and a parking awning. Windows at the entrance are imprinted with greetings to each neighborhood, for example, “HELLO BALLARD,” and “HELLO, SODO.” 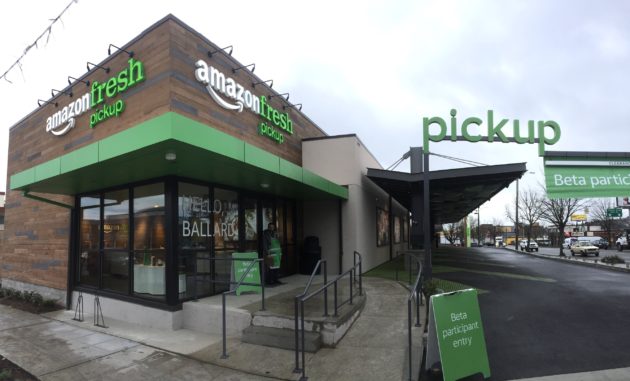 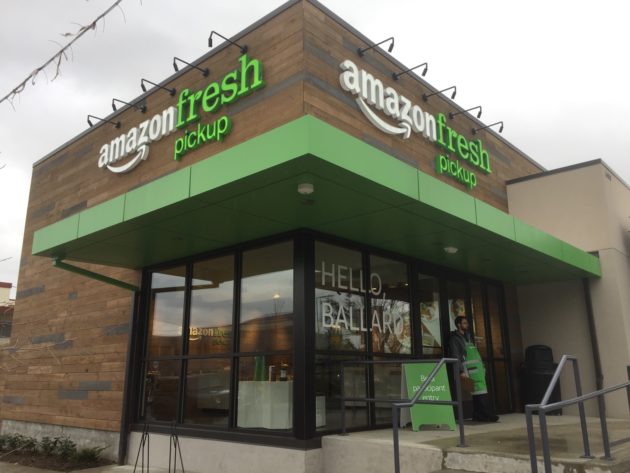 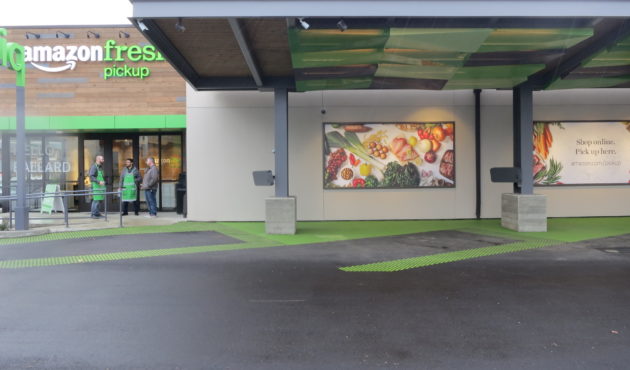 The Ballard site is on the busy 15th Avenue corridor, with cars streaming off the Ballard Bridge into the longtime Scandinavian fishing enclave. The neighborhood has undergone a major transformation in recent years, fueled largely by the tech boom, with condo and apartment units springing up seemingly all over to accommodate an influx of new residents. 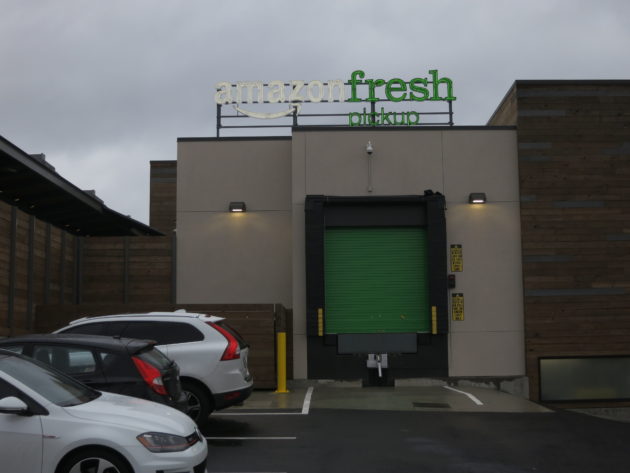 One sign on the Ballard location even mimics rooftop neon on nearby businesses, including the Seattle Gymnastics Academy and the iconic Bardahl neon sign which has served as a beacon in the neighborhood since 1953.

During the testing phase, monitors at the head of each of nine parking spaces will not be operational. Hours posted on the front window say that the location will be open daily, 7 a.m. to 10 p.m.

The awning at the Sodo site sits in the parking lot of the headquarters of another signature Seattle company, Starbucks. The physical store is in the building, where Sears used to have its Seattle department store. Also in that building is a Prime Now distribution hub. 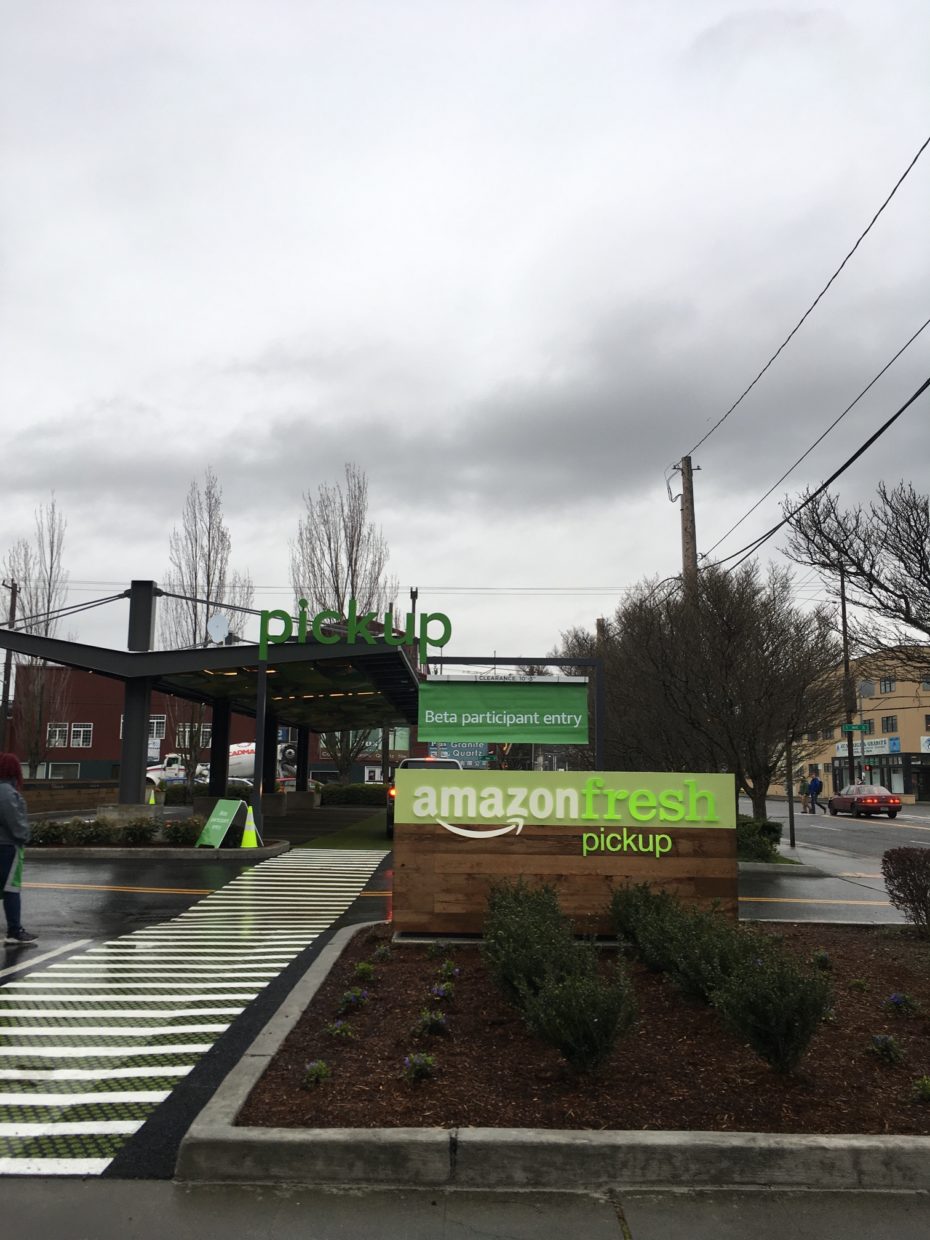 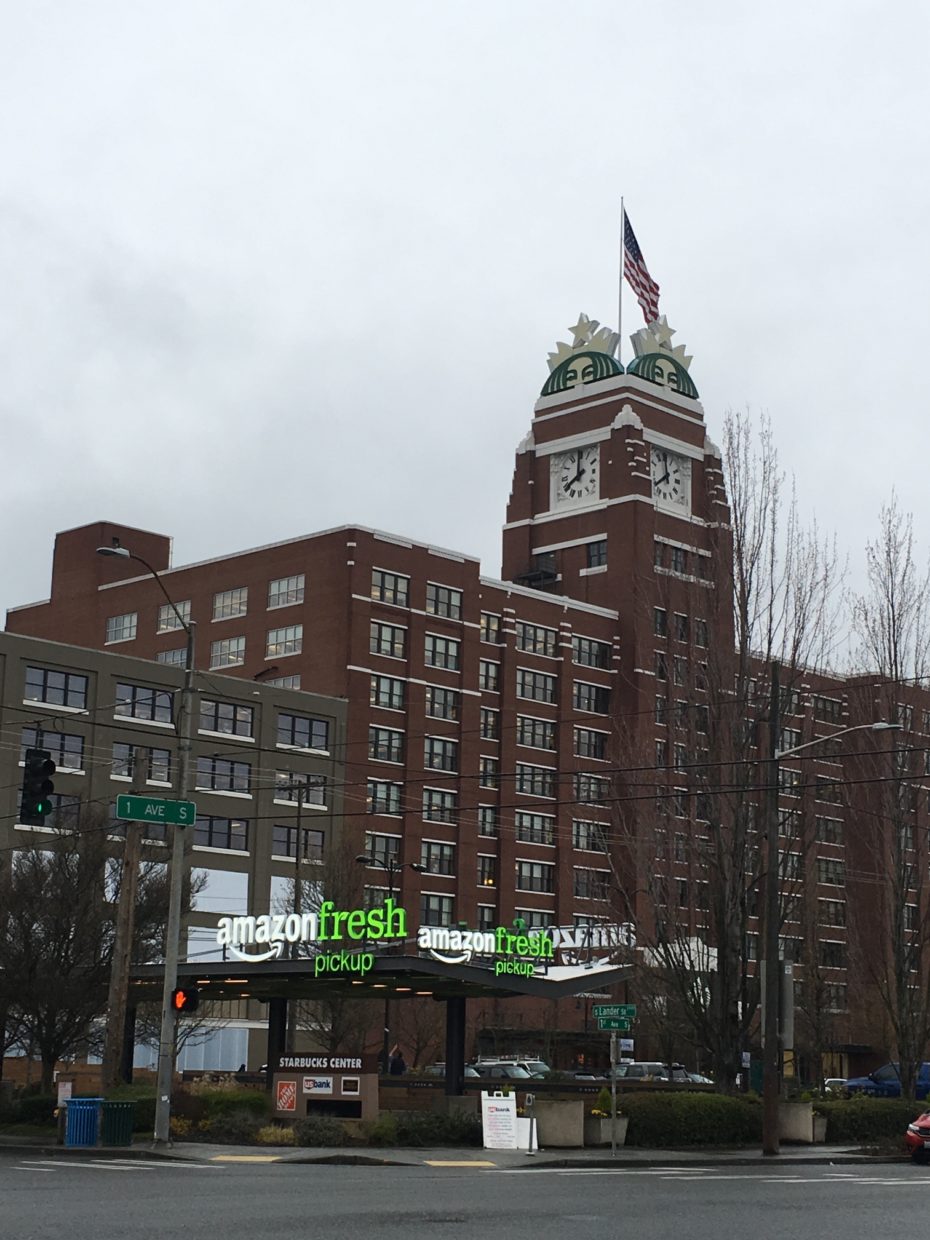 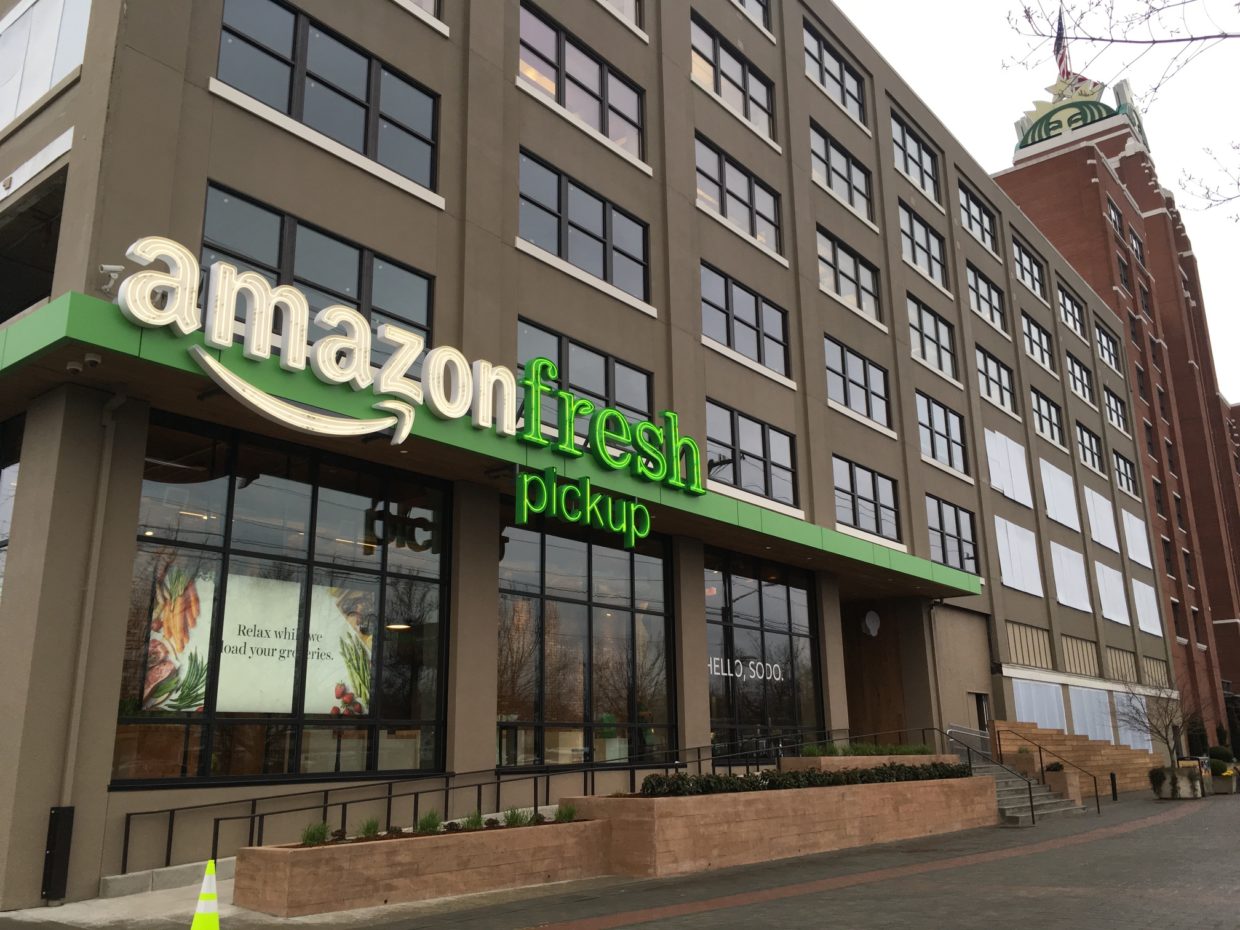 Speculation about the stores began last summer when GeekWire discovered permit documents indicating plans for the stores, first in Ballard, then in SoDo. Amazon did not acknowledge the stores at the time, and kept its involvement hidden, even referring to the Ballard site as “Project X” in planning documents. More recently, permit filings unveiled the name of the service as “AmazonFresh Pickup.” 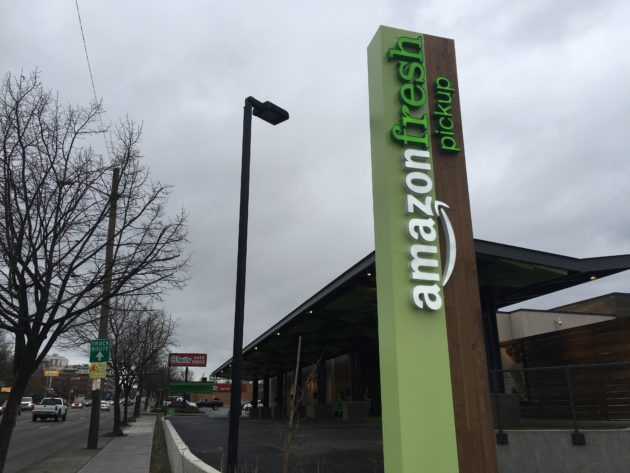 Amazon has in the past few years dove into the brick-and-mortar retail world, after making its name in online commerce. The company’s Amazon Go automated convenience store in downtown Seattle, unveiled last year, is open only to the company’s employees, as well. The public opening of Amazon Go has been delayed amid reports of technical glitches in its automated system.

In addition, Amazon earlier confirmed plans to open what will be its 10th bookstore nationwide, and second in the Seattle area, in Bellevue, Wash. this year. Pop-up stores have begun showing up at malls all over the country, and the company appears poised to add more this year.