Amazon is remodeling the former Sears store at the Starbucks headquarters in Seattle with 40,000-square-feet of distribution space, a public retail lobby, and an outdoor canopy strikingly similar to the one going up at Amazon’s future drive-up grocery store in Seattle’s Ballard neighborhood.

Have we found the future site of another Amazon drive-up store? The company isn’t saying, but it’s a definite possibility, based on the similarities to the Ballard project, along with building permits and other planning documents that connect Amazon to the larger renovation.

Amazon has already opened a new Prime Now facility in part of the space at the Starbucks complex, accessed from the back of the building, as reported by the Puget Sound Business Journal last week. But recent filings with the city reveal that Amazon has much larger plans for the property, including a renovation of the first floor of the former Sears space, accessed from the front of the property.

In addition, planning documents confirm that the nearby canopy will be used “for drive-through/pick-up activities.” 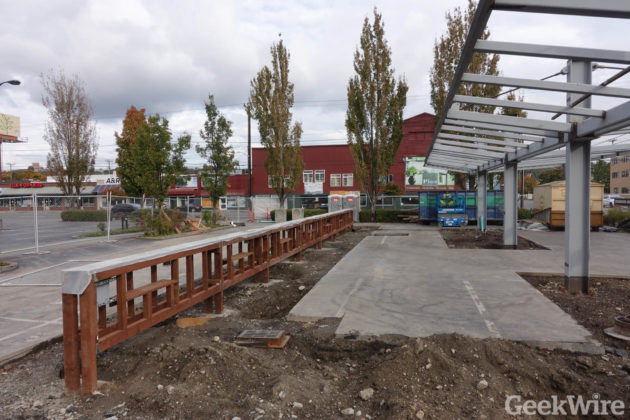 The canopy will include seven parking bays, each with an electrical and data outlet, according to blueprints.

Numerous tipsters sent GeekWire email messages about the similarities between the canopy at the Starbucks Center and the one going up in Ballard (below) after seeing our latest reports about Amazon’s drive-up grocery plans.

Amazon is named at least three times in planning documents for the renovation of the former Sears space at the Starbucks Center, which also reference the separate permit for the canopy construction.

The architect, Ware Malcomb, and construction company, Wilcox Construction, are also the same firms used by Amazon for similar projects.

Amazon representatives, who have yet to officially confirm the Ballard drive-up grocery plans, similarly haven’t responded to GeekWire’s inquiries about the project at Starbucks headquarters. Construction workers were also tight-lipped about what was going on at the facility.

Amazon’s planned space at the Starbucks Center, south of downtown Seattle, is much larger than the one in Ballard, potentially combining the Prime Now distribution center with a drive-up area and lobby for customers who order online.

Sears historically occupied the building as a catalog distribution center and retail store, ending its catalog operations there in 1987 and moving out entirely in December 2015, according to a letter from the building’s management firm to city officials.

The Wall Street Journal, quoting an anonymous source, reported this morning that the company may be “just weeks” from opening the Ballard drive-up grocery location. The drive-up grocery stores are part of a larger initiative by Amazon that could also include its own convenience stores to sell perishable items such as produce, milk and meat, according to the WSJ report.