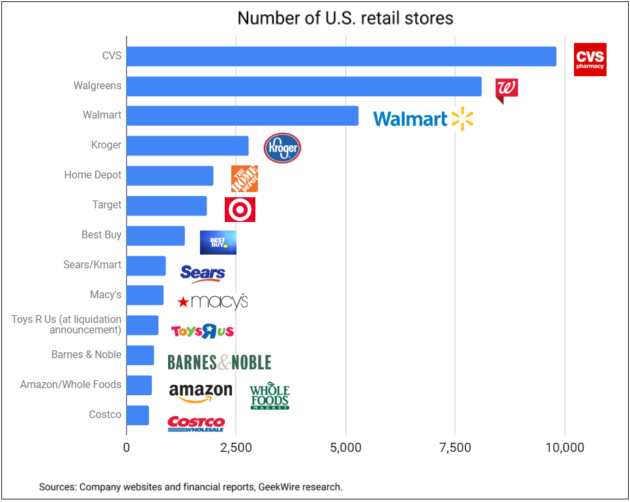 Amazon’s rapidly growing brick-and-mortar footprint — including a second Amazon Go store opening in Seattle this fall — has already surpassed Costco’s U.S. store count, but it has a long way to go to catch up to some of the company’s other retail rivals.

Whole Foods locations make up close to 80 percent of Amazon stores across the U.S., underscoring the importance of the $13.7 billion Whole Foods acquisition for the company’s brick-and-mortar push.

Thanks to the Whole Foods deal, Amazon is breathing down the necks of traditional retailers like Sears and Macy’s, both of which have closed stores this year. However, Walmart dwarfs Amazon’s footprint with 5,295 stores across the country. Kroger (2,779 stores), Home Depot (1,981), Target and Best Buy (1,328) each boast a much larger national footprint as well.

In the healthcare world, drugstore giants CVS and Walgreens lead the way with about 9,700 and 8,100 U.S. locations respectively. With Amazon’s growing interest in healthcare, keep an eye on the drugstore/pharmacy market as a potential expansion spot for the tech giant’s retail footprint.

Unlike many of these companies, which have been building stores for decades, Amazon is new to the physical retail world. Amazon opened its first brick and mortar store, the Amazon Books location in Seattle’s University Village mall, in 2015. The Amazon Books concept has grown to 18 locations either open or on the way, according to Amazon.

Amazon Go is a minuscule part of the company’s overall retail footprint, but its cashier-less checkout technology has made waves across the retail industry. The first Amazon Go location opened to the public in January, after more than a year of internal testing, and the second Seattle store is coming this fall, as first reported by GeekWire this week. Two sites have been identified for Amazon Go stores in Chicago and Amazon has committed to a presence in San Francisco.

In 2016, reports surfaced that Amazon was planning to open 100 Pop-Up stores selling Amazon devices in malls and inside Whole Foods locations across the U.S., and so far the company has 66 open or coming soon, according to its stores website.

Amazon opened its first two AmazonFresh Pickup stores, where customers can order groceries online and schedule them for pickup, in Seattle last year.

Amazon is still catching up to its competitors in physical presence, but its prowess in online retail and logistics has inspired many retailers to up their game in those areas. Walmart has been especially aggressive, acquiring Jet.com for $3.3 billion and Bonobos for $310 million.

Walmart also made a flurry of other moves: expanding grocery delivery services across the nation; buying New York-based Parcel to strengthen same-day delivery capabilities; and building a network of massive Pickup Towers where customers can find their online orders. Walmart has teamed up with companies like Google and Postmates, and recent reports indicate Walmart is talking to Microsoft about an Amazon Go-like technology the tech giant is developing.

Amazon’s brick-and-mortar expansion is a stark contrast to the major retailers closing stores and others going out of business all together. Toys R Us is the latest victim, as the company shut down its remaining physical stores last week, following liquidation and bankruptcy. Given these trends, it wouldn’t be a surprise to see Amazon’s physical footprint surpass more of its traditional brick-and-mortar rivals in the years ahead.