A big battle is brewing over the delivery of milk, fruit and cheese, and how Americans will spend their hard-earned dollars on groceries.

Walmart today unveiled an aggressive plan to expand its online grocery delivery service from six test markets to 100 metropolitan areas, leveraging a network of more than 800 physical retail stores to fulfill customer orders. The move — announced via press release Wednesday morning — indicates the seriousness by which Walmart takes grocery delivery threats from the likes of Amazon, Instacart and Target.

Interestingly, Amazon was the pioneer in online grocery delivery, launching its AmazonFresh service in Seattle more eleven years ago. Since that time, the online retailing giant has taken a baby-step approach to grocery delivery — indicating the inherent challenges in building a sustainable business in the low-margin grocery business. Last November, Recode reported that AmazonFresh was curtailing service in certain areas within nine states.

That’s not the case at Walmart, which sees an opening to counterpunch Amazon and utilize its existing physical store footprint to take a bigger bite out of the $800 billion that Americans spend on groceries each year.

Using our size and scale, we’re bringing the best of Walmart to customers across the country.

“We’re saving customers time by leveraging new technology, and connecting all the parts of our business into a single seamless shopping experience: great stores, easy pickup, fast delivery, and apps and websites that are simple to use,” said Walmart U.S. CEO Greg Foran noted in the release. “We’re serving our customers in ways that no one else can. Using our size and scale, we’re bringing the best of Walmart to customers across the country.”

By the end of the year, Walmart says its online grocery delivery service will reach more than 40 percent of U.S. householders. Groceries can delivered to customers on the same day as they order, with Walmart charging a $9.95 fee on orders of more than $30.

“No subscription, no price markups,” Walmart wrote in its release, an apparent dig on Amazon which has increasingly tied grocery delivery into its Prime membership program. Amazon Prime members receive the benefits of AmazonFresh for an additional monthly membership fee of $14.99.

Amazon also is looking to leverage its own grocery footprint following its blockbuster $13.7 billion purchase of Whole Foods last year. Just last month, Amazon announced Whole Foods grocery delivery service, offering a free delivery service for Prime Now customers in Austin, Cincinnati, Dallas, and Virginia Beach for orders of $35 or more. For those who want service within the hour, customers can pay an additional fee of $7.99.

Prime Now differs from AmazonFresh in that the company employs a network of contract couriers to deliver goods quickly to customers from Amazon, plus select partner stores and restaurants 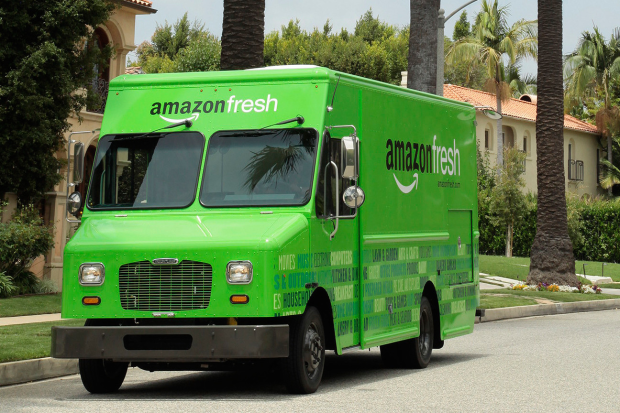 AmazonFresh, on the other hand, typically utilizes internal Amazon infrastructure, including its own lime green delivery trucks which have become ubiquitous on streets in cities such as Seattle, San Francisco, New York and Philadelphia. Amazon now offers groceries delivered via Prime Now or AmazonFresh in more than 50 cities worldwide.

Rival delivery service Instacart, which is backed in part by Whole Foods and reportedly holds an exclusive delivery deal with the grocery chain, recently announced deals with Albertsons and QFC in recent months. In fact, Instacart expanded from 18 to 35 markets in the past year, and the company has said it will double its footprint this year.

It continues to offer its service from Whole Foods stores.

And there’s yet even more movement in this competitive market, as Target last December paid $550 million in cash for delivery service Shipt, and its 20,000 personal shoppers.

That’s led some to wonder if Instacart — led by former Amazon supply chain engineer Apoorva Mehta and valued at $3.4 billion following a $400 million venture round earlier this year — might be an acquisition target for one of the industry giants. Stay tuned.