One year after attempting to take on social media giants with its own content platform focused on celebrities, TraceMe is pivoting.

The startup is shifting its business from a celebrity content app to a sports prediction game called Tally that offers real cash prize payouts. The app was released for iOS on Friday.

The company laid off content-related and celebrity relations staff who were mostly working out of Los Angeles. There are now 17 employees; TraceMe employed 24 people in May.

TraceMe had aimed to connect celebrities with “superfans” through its app via behind-the-scenes content, community features, and more. But LeeKeenan said the company overestimated the addressable market for TraceMe, which raised a $9 million round last year from investors such as Amazon founder Jeff Bezos, YouTube founder Chad Hurley, Alibaba co-founder Joe Tsai, and Seattle-based Madrona Venture Group.

The TraceMe app will shut down in the coming weeks.

Leekenan, a former executive at Hulu and Zulily, is now focusing his team on Tally, which is centered around the live event experience with an app that rewards users for making predictions. It’s a free-to-play game that offers cash prizes for those that rank highest on a leaderboard.

Tally will debut with NFL and college football games. Each user can make up to 12 predictions per game, ranging from selecting a winner to picking which team will have the first penalty. Points are awarded on a probability scale — if you predict something with a low chance of happening, you win more points. The top point-getter will win $100 for each game; if someone gets all 12 predictions right, that person wins $5,000.

The company sent an email to users about the change on Friday evening.

“We know you’re a fan – but are you ready to show your fandom like never before? All the fun is on TALLY, go check it out right now! If you thought TraceMe was fun… wait till you experience our new world on TALLY,” the email reads.

We see this as a really friendly version of fantasy.

Tally is funding the prize payouts, which will be issued to winners via PayPal within three days. LeeKeenan said the app is not related to sports betting, which has caught the attention of investors and technologists expecting more legalization across the U.S. after a key Supreme Court decision earlier this year.

“We see this as a really friendly version of fantasy,” he said.

The app is ad-free for now, but LeeKeenan said there are ways to generate revenue from advertisers down the line if Tally can rack up enough users.

The inspiration for Tally came from TraceMe learnings about high engagement from gamification, as well as the popularity of live events, LeeKeenan said. He pointed to the Super Bowl Squares game that people often play during the annual football championship.

“What if every live event was as fun as the Super Bowl?” LeeKeenan said. 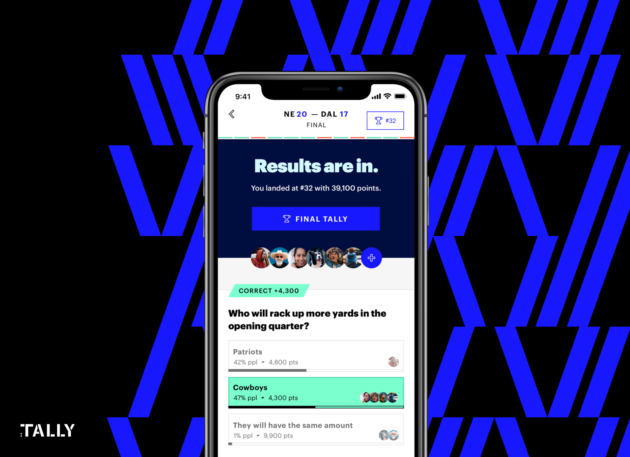 Tally mimics gamification and engagement concepts from HQTrivia, a live mobile game which went viral earlier this year and continues to expand. Another Seattle company, iPro, released a similar sports prediction app in 2015, though it doesn’t appear to be active now.

Amazon is also building technology for sports predictions with its NFL live streams on Twitch this season.

Wilson remains chairman of the company, but his role will “definitely be different,” LeeKeenan said, given that the Seahawks quarterback is playing in games featured on the Tally app. TraceMe relied heavily on Wilson and other celebrities for content creation, whereas Tally is more about the outcomes of sports games.

LeeKeenan said it was painful to go through layoffs, but he’s optimistic about where the company is headed.

“When you are at a startup, you have to be great at transitions,” he said. “Intellectually, we all asked ourselves, did we really give TraceMe a shot? We felt comfortable that we did … the credit really goes to the team, they’ve done an awesome job of embracing change. We’re excited about what lies ahead.”