A new startup from Seattle is putting a different spin on the daily fantasy sports model with an app that lets users win cash if they predict specific plays and statistics correctly. 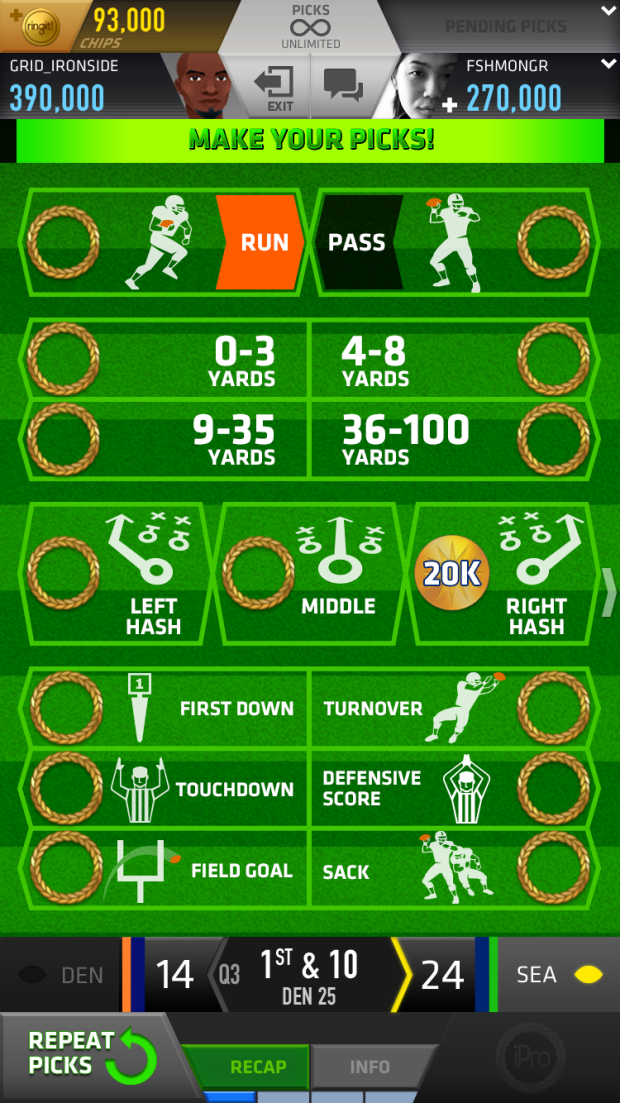 iPro today launched ringit! Pro, a new mobile app that offers players more than 15,000 prediction opportunities during a single NFL game and challenges them to quickly think about what play a coach might call or which player will earn yards.

The platform is powered by sophisticated algorithms which produce dynamic odds that change throughout a game depending on what has happened. Those odds can affect how much you can win for correctly picking a given play.

For example, if you predicted that the Seahawks were going to throw the ball on the goal line at the end of last season’s Super Bowl — the odds of this were fairly low, but that’s what the coaches ultimately decided — then you’d have been rewarded heavily, versus if they ran the ball and you correctly picked the higher-probability play.

However, iPro founder and CEO Robert Melendres noted that the odds are “set in such a way where it remains a game of skill” — meaning, if you consistently pick something that’s unlikely to happen in the hopes of hitting big, you probably won’t win.

“People who understand football really are the ones who ultimately win,” Melendres told GeekWire. 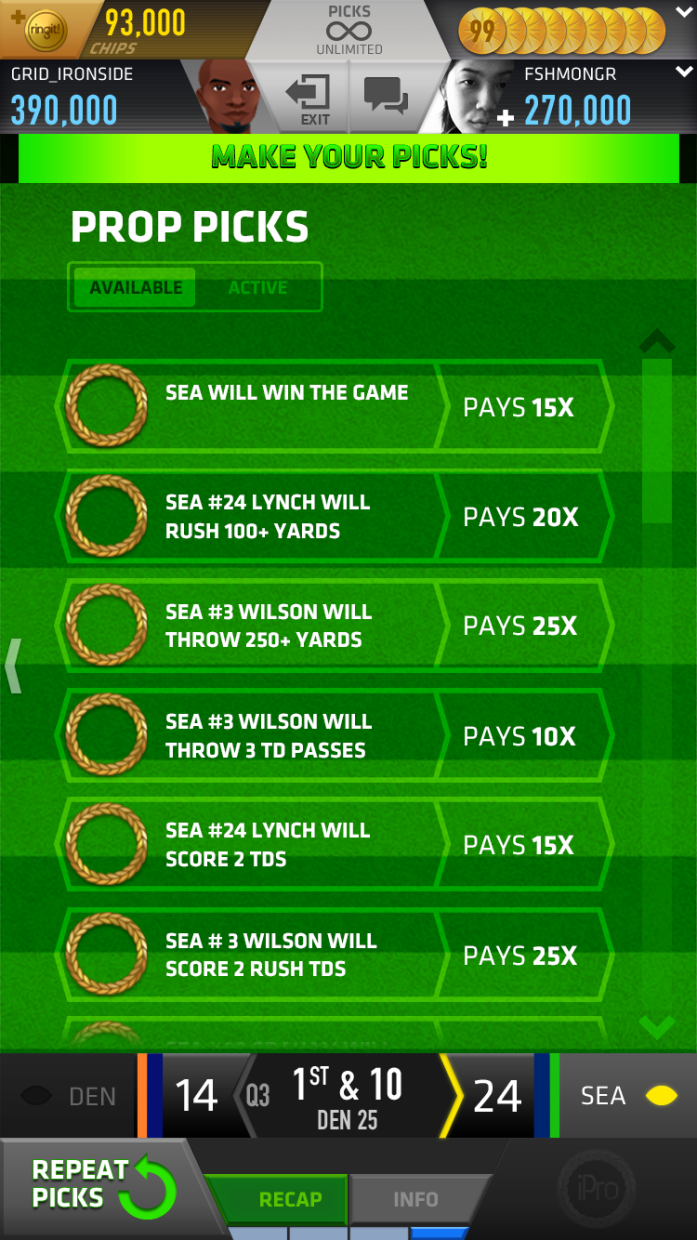 For now, the app is only offering a “social” mode with virtual currency and no real money being exchanged. But Melendres said that his year-old company, which employs about 25 in Seattle and another 35 in India, plans to roll out cash games that somewhat mimic popular daily fantasy sites like DraftKings and FanDuel.

With those yet-to-be-released games, Melendres said that users will be able to compete in a variety of challenges and tournaments with varying prize pools. Those that are best at predicting what specific plays happen during a game will win money — in many ways quite similar to the premise of DraftKings and FanDuel.

Another similarity exists in iPro’s business model, which creates revenue by taking a percentage of each entry fee.

“That’s how we make money at the end of the day,” Melendres said.

It’s a unique take on the daily fantasy football craze, which has exploded in recent months with the popularity of platforms like DraftKings and FanDuel that are awarding millions of dollars each week to those picking the right combination of high-performing players.

Ringit!, which also lets people predict on a quarter-by-quarter, half-by-half, or entire game basis, differentiates itself by honing in on the intricacies of every play, from personnel to yardage to end result (pass, run, touchdown, interception, etc.). It requires users to think on their feet — there is a maximum of 40 seconds in between plays. 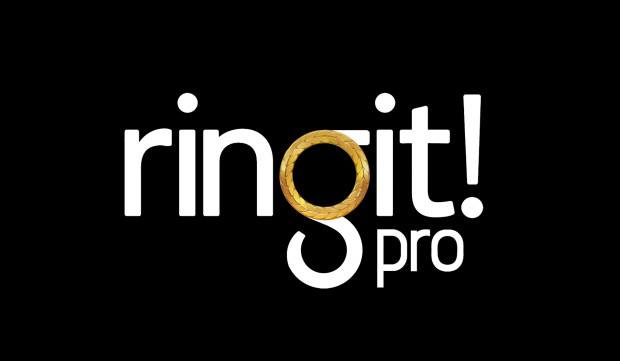 “You feel the same pressure as the coach feels on the field,” Melendres said. “You will feel that clock ticking down.”

The result is a fast-paced game that provides numerous opportunities to win but also rewards those that use their football knowledge to predict outcomes.

“It’s easy to start playing, but hard to master,” Melendres added. “That is a really important formula for really good, deep games.”

iPro, which is also offering a more simple version of its new game called simply RingIt!, should expect scrutiny from regulators, given the recent interest from federal investigators who are examining the structure of how DraftKings and FanDuel conduct business and determining whether they should fall into the “gambling” category.

These companies say they adhere to a law created by the government about a decade ago that exempts fantasy sports games from traditional sports gambling rules on the premise that they are more of skill-based games.

Melendres, a Harvard Law School graduate who previously served as chief legal officer for International Game Technology (IGT), said that iPro’s new games fall into that same category. That means the real-money app won’t be available for users in the six U.S. states — including Washington — where paid fantasy sports are not allowed.

“I look very specifically not as what people feel about a game in terms of gambling, but what law tells us,” he said. “I’m very familiar with the laws and rules around gaming. Our strategy is to stay in the safe conservative zone and stay in line with what is legal and what is not.”

The iPro leadership team have impressive resumes. Melendres is a veteran of the tech industry and picked up some game-related knowledge while heading up the legal team at IGT, the world’s largest developer and provider of casino style games, which in 2012 paid up to $500 million for Seattle social gaming powerhouse Double Down Interactive. His co-founder David Ortiz was a senior producer for EA Sports’ popular Madden football franchise, a role that’s helped him contribute knowledge about NFL-related simulations.

Others include former execs at places like IGT and Double Down. There’s also a Stanford Ph. D mathematician who is an expert with odds that is part of iPro’s team.

“We have deep patented, exclusive technology built by some tremendous geniuses I have on the technical and product side of the team,” Melendres said.

Melendres wouldn’t disclose total funding to date, but did note that Penn National Gaming Inc. has made a strategic minority in the company this month.

“The popularity of fantasy sports and social gaming continues to grow at phenomenal rates and our analysis indicates that there is a significant overlap between these players and casino players,” Chris Sheffield, President of Penn Interactive Ventures and Senior Vice President and Managing Director of I- Gaming for Penn National Gaming, said in a statement. “We believe iPro’s new ringit! sports prediction platform offers a unique, real-time, social and fantasy sports game, capable of packing a weekend of action into every game, and that our customers will really enjoy.”