Food samples, loyalty programs, magazine subscriptions and, of course, Girl Scout cookies are among the items typically featured at promotional tables inside grocery stores. But at the entrance to a QFC near Seattle earlier this summer, a new form of shopping technology greeted shoppers instead.

On display was “Scan, Bag, Go,” a system built by QFC and Fred Meyer parent company Kroger that lets customers scan items with a handheld device as they shop. The same device is used at the self-checkout kiosks to pay for everything at once; you can also use a smartphone app instead.

The idea is to remove cashiers from the process and reduce the amount of time it takes to purchase products. It’s the latest example of retailers testing new technology to improve the physical shopping experience inside brick-and-mortar locations. 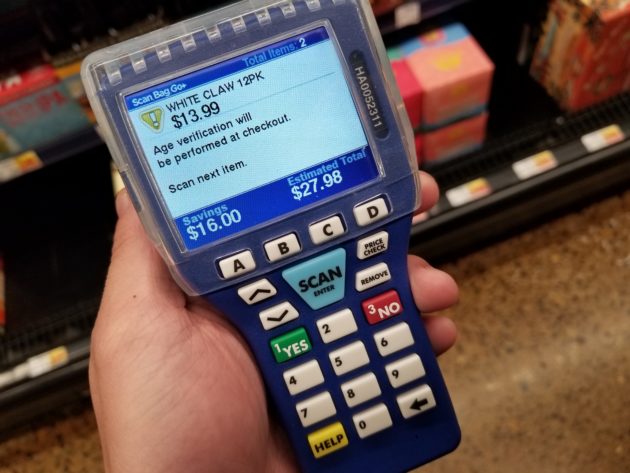 Companies ranging from long-time grocers to tech startups are testing a multitude of new tech-powered services, from online delivery to automated checkout. The stakes are high in the $800 billion U.S. grocery market. But it’s unclear which tech-fueled ideas, if any, will take off.

As with much in retail innovation these days, Amazon is driving the trend. The Seattle-based tech giant made headlines this year when it publicly opened up the first Amazon Go, a “grab-and-go” cashier-less store that lets customers take items off the shelf and walk out without going through a traditional checkout line or register. The experience is powered by a smartphone and an array of cameras and sensors. Amazon is already opening up more stores in Seattle and across the U.S.

Other companies are also developing checkout-free technology. Ava Retail, located a short drive away from Amazon’s headquarters, has rolled out its services inside WeWork locations and collaborates with industry giants including Microsoft, Intel, and Mastercard. It uses a combination of sensors, beacons, cameras, artificial intelligence, machine learning, and smartphone apps to recognize products and track shoppers, who can simply pick up items, walk out, and have a receipt sent to them via email.

“It’s about the experience and solving for friction,” said Atul Hirpara, CEO of Ava Retail.

Hirpara touts his product as a lower-cost option to Amazon Go. “Amazon Go is free marketing for us,” he said. “Every time Amazon makes a move, we get a few more phone calls.”

There are several other smaller startups developing similar technology. Zippin just launched a beta of its first automated checkout market in San Francisco this week, with the intention of selling the technology to other stores. It’s “the first Amazon Go rival to open to the public anywhere,” according to Fast Company.

Inokyo opened its own store earlier this month in Mountain View, Calif.; TechCrunch wrote that the company “wants to be the indie Amazon Go.” Additional players in this field include Standard Cognition, Trigo Vision, AiFi, Aipoly, and Imagr.

Entrepreneurs and investors see potential for the “just walk out” concept, which is also rolling out in Asia. But while the technology is eye-catching, some doubt imminent widespread adoption.

“It can work in high-density locations for someone who wants to just grab a water and a snack, but I don’t think it will be pervasive in large-scale supermarkets,” said Phil Lempert, founder of Supermarketguru.com. “I don’t think consumers really want that.”

A Forrester report from May — The Top Retail Technology Investments In 2018 — stated that retailers are holding off on investments in checkout-free technology “because customers simply do not expect it yet.”

My test of Kroger’s scanning tech at QFC reflected this — it was a cool experience, but didn’t actually save me much time and wasn’t much better, if at all, than using a traditional cashier. Walmart axed a similar service earlier this year.

Checkout-free technology may also surface new problems related to privacy and theft, said David Marcotte, a senior vice president at Kantar Retail. There are also pressing questions about job displacement. For physical retailers, investing in high-tech cameras and sensors may be more about the collecting valuable data — tracking shopper movement, monitoring inventory levels, etc. — than it is about replacing cashiers.

“The mass of data they can use and harvest is tremendous,” Marcotte said.

Other experimental stores focusing on niche audiences and social causes are gaining momentum and putting pressure on traditional supermarkets, The New York Times reported in July.

But perhaps the future of grocery is not inside the actual stores themselves.

Amazon has brought a whole new way of thinking to grocery.

Walmart, which impressed Wall Street with its most recent earnings report, continues to roll out online delivery and grocery pickup at hundreds of stores across the U.S. It is also testing self-driving technology with Google’s Waymo arm.

Instacart also continues to expand its footprint across the U.S. and was valued at more than $4 billion after closing a $350 million Series E investment round earlier this year.

Buying groceries online isn’t a new phenomenon. But it still hasn’t caught on with most Americans — only 9 percent do it at least once per month, according to a new Gallup poll.

Yet companies still see opportunity to use technology and the internet for grocery, particularly since the median expenditure per U.S. household on food was $125 per week in 2007, according to Gallup. Amazon, whose grocery ambitions date back to its launch of AmazonFresh in 2007, made that clear when it ate up Whole Foods for a whopping $13.7 billion last year.

Amazon has steadily integrated its e-commerce arm with Whole Foods over the past several months. It is making Amazon Prime the Whole Foods customer rewards program and also offers 5 percent back on all purchases to customers with the Amazon Prime credit card.

Amazon, now valued at more than $900 billion, has one advantage with its grocery-related products, as it can develop and test new services without worrying too much about its bottom line given the revenue from other parts of the business.

But it remains to be seen whether Amazon will disrupt yet another industry. Retail experts from Oliver Wyman wrote in The Harvard Business Review that “retail is littered with promising technologies introduced with great fanfare that didn’t become mainstream because they didn’t sufficiently benefit either the retailer or the customer.”

“Amazon has already benefited from the industry buzz around its concept store, which could very well set customer expectations for the in-store experience of the future,” they wrote. “But other retailers will most likely find the initial costs too high and benefits too uncertain to immediately follow in Amazon’s footsteps. Instead, they should watch closely and be prepared to make a move — if the system makes economic sense, and if consumers like it.”

So far, they do. Amazon Go drew giant lines when it opened in Seattle earlier this year. The store has a 4.5-star rating on Yelp, with customers raving about the concept.

Amazon Go is part of a broader push by Amazon into physical retail, including its acquisition of Whole Foods, its Amazon Books stores, and AmazonFresh Pickup locations.

“That deal woke up the industry,” Lempert said of Amazon buying Whole Foods. “Amazon has brought a whole new way of thinking to grocery.”