PITTSBURGH — Amazon will add 125 new jobs to its engineering center here, more than doubling its footprint and escalating the competition for tech talent in a city where big companies like Google and Uber are growing quickly alongside homegrown tech startups.

At a time of intense speculation about Amazon’s HQ2 in Pittsburgh and other cities on the company’s short list, it might be tempting to read something more into the expansion announcement. However, Amazon said the engineering office expansion is unrelated to its HQ2 search.

Amazon opened its Pittsburgh hub in early 2017, and it’s one of more than a dozen Amazon tech centers around the country. The company currently employs more than 60 people here, working in areas including machine translation and Alexa speech science. As part of the expansion of its Pittsburgh office, known internally as PIT10, the company said it will add another 22,000 square feet to its existing office in Pittsburgh’s SouthSide Works building.

GeekWire is reporting from Pittsburgh this month in a special project covering the city’s growing tech industry. Amazon is the latest tech giant to expand its engineering presence in the Pittsburgh area — mirroring, on a smaller scale, a phenomenon experienced in Seattle.

Google, which opened a Pittsburgh office in 2006, now employs 500 people. Uber has a large autonomous vehicle research and development center in the city, employing hundreds of people working on the company’s self-driving technology. Other tech giants like Bosch, SAP, Facebook, Ford, Microsoft, Apple, and more also have offices in Pittsburgh, tapping into the talent coming out of nearby Carnegie Mellon University and the University of Pittsburgh.

Amazon’s presence in Pittsburgh dates back to before it opened its engineering center. In 2015, Amazon acquired Safaba, a translation software startup that spun out of CMU. Safaba co-founders Alon Lavie and Robert Olszewski still work at Amazon. That same year it also bought Shoefitr, a Pittsburgh-based 3D technology startup.

Pittsburgh is considered a long shot for Amazon’s HQ2. However, in an interview earlier this month, Pittsburgh Mayor Bill Peduto told GeekWire he believes Amazon can help create a new wave of growth in his hometown if it chooses the city for its HQ2. 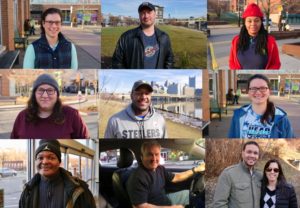 “If they want to really be able to show to the world how their investment can benefit a community in the whole, if they want to be able to raise up the underserved and those that have been given no ladder of opportunity for a new economy, then they would look at Pittsburgh beyond any other city — because we did it,” he said, referring to the Rust Belt city’s transition from steel to tech.

Kamal Nigam, leader of Google’s Pittsburgh office, told GeekWire last month that it would be positive if Amazon put its second headquarters in his city. That’s in contrast to other tech company leaders who are nervous about Amazon’s HQ2 impact on recruiting talent.

“I think in general I’m pretty excited about the opportunity for the tech scene in Pittsburgh to continue to grow,” Nigam said.

Amazon will hold an event on Thursday with Peduto; Congressman Mike Doyle; Rich Fitzgerald, Allegheny County executive; Dennis Davin, secretary of the Pennsylvania Department of Community and Economic Development; and other tech leaders at its office. The company says it has created more than 10,000 jobs in Pennsylvania and invested $4 billion in the state since 2011 via its fulfillment centers and research facilities. Philadelphia is also among the 20 finalists for Amazon HQ2.