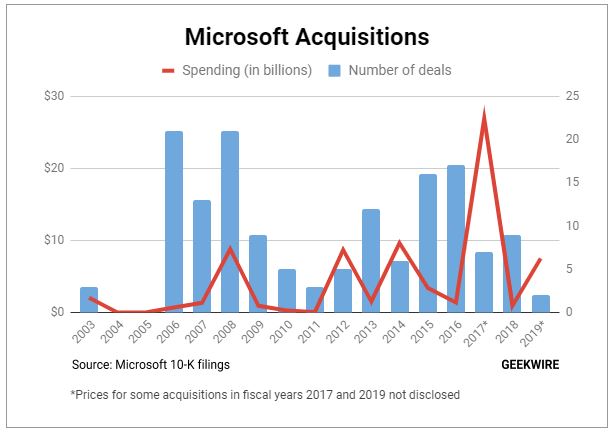 Just four months into Microsoft’s fiscal year, the company has spent more on acquisitions than it has in many entire years in the past.

According to a GeekWire analysis, Microsoft’s fiscal 2019 already ranks as its fifth-biggest year for acquisition spending since 2003. That’s when Microsoft started breaking out that information in annual 10-K filings with the U.S. Securities and Exchange Commission.

Most of the spending so far has been on one deal, the $7.5 billion acquisition of software development community GitHub, completed Friday. But the company also recently announced the purchase of artificial intelligence startup Lobe, and the total is expected to grow further with Microsoft-owned LinkedIn in the process of acquiring Glint for a reported $400 million.

Apart from the GitHub acquisition, a pattern emerges when looking at the deals announced by the company over the past 12 months: Microsoft is focusing heavily on acquisitions in artificial intelligence (Semantic Machines, Bonsai, etc.) and gaming (Playground Games, Undead Labs, and others).

This coincides with a broader surge in corporate mergers and acquisitions, resulting from U.S. tax reform and other favorable conditions for M&A activity. For Microsoft, another factor is the value of the company’s shares, up more than 27 percent over the past year, which provides greater flexibility to fund deals such as the all-stock GitHub acquisition.

Microsoft’s biggest year for M&A spending was 2017, when the tech giant completed its $26.2 billion LinkedIn acquisition. 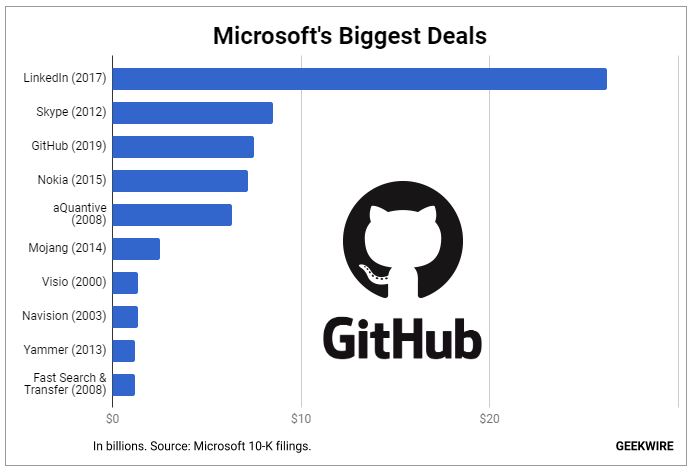 The company’s fiscal year ends June 30, and a lot of these deals were completed in the fiscal year after they were originally announced. For example, the GitHub deal was announced in June — at the tail end of the company’s 2018 fiscal year — but since it closed after June 30, it counts toward Microsoft’s 2019 fiscal year. Why wait until a

Microsoft’s acquisition volumes vary widely by year. In 2004 and 2005, for example, the company made no acquisitions financially significant enough to require disclosure in its 10-K filings as events material to its financial results. But in the next three years, the company made 21, 13 and 21 acquisitions, respectively. Between fiscal years 2015 and 2018 — the four full years Satya Nadella has been at the helm as CEO — Microsoft has made an average of 12 acquisitions per year, according to the filings.

Spending has been up and down over the years, too, with outsize acquisitions typically driving the trend. Counting 2019, Microsoft has spent more than $1 billion on acquisitions in eight of the last nine years, with 2018 as the lone outlier. Microsoft has twice spent nothing on buying other companies during the period we analyzed and five years with more than $7 billion in acquisition spending.

By far, the biggest acquisition year was 2017, when the LinkedIn deal closed. Microsoft didn’t disclose in its annual filing for that year how much it paid for the other six companies it acquired, but the LinkedIn deal alone nearly tripled the company’s previous record spending year.

Microsoft’s next priciest fiscal years were 2008, when it bought Seattle-based digital advertising company aQuantive for $6.3 billion; 2012, which included the $8.5 billion acquisition of Skype, the second biggest buy in company history; and 2015, when Microsoft acquired Nokia for $7.2 billion.

Microsoft has had a checkered history with major acquisitions. In 2012, the company took a $6.2 billion writedown, largely tied to aQuantive, which the company admitted at the time wasn’t working out as planned. In 2015, Microsoft cut 7,800 jobs and took a $7.6 billion charge related to its acquisition of Nokia’s smartphone business.

So far, the LinkedIn acquisition looks like a good buy. Microsoft has mostly left the company alone, and has been releasing a steady stream of integrations between the business social network and its own products.

Microsoft has pledged to let GitHub operate independently, though some developers vowed to leave the platform with Microsoft in control. Incoming GitHub CEO Nat Friedman said in Friday’s closing announcement that the platform has grown to more than 31 million software developers, up from 28 million when the deal was announced in June.

The growth suggests that any departures were more than covered by the volume of newcomers, many of whom were likely drawn to GitHub by the buzz generated from the Microsoft acquisition.

In a blog post at the time of the original GitHub announcement, Microsoft CEO Satya Nadella identified three “clear opportunities” in the combination of the companies: In addition to keeping GitHub a central part of the software developer community, he said the deal “will accelerate enterprise developers’ use of GitHub, with our direct sales and partner channels and access to Microsoft’s global cloud infrastructure and services” and will help “bring Microsoft’s developer tools and services to new audiences.”