Amazon is, apparently, very on-trend. Last year, the coveted millennial demographic bought more clothing from the online retailer than any other website, according to data from Slice Intelligence.

Slice studied the digital receipts of online shoppers who agreed to participate in its research and discovered that the 18-to-34-year-old demographic purchased about 16.6 percent of its clothing on Amazon.com.

The Seattle e-commerce giant beat its neighbor, Nordstrom, by a landslide, accounting for more than double the online clothing sales to millennials. Nordstrom was responsible for 8.1 percent of online apparel sales to this demographic, followed by Old Navy with 5.1 percent and J.Crew with 4.2 percent. 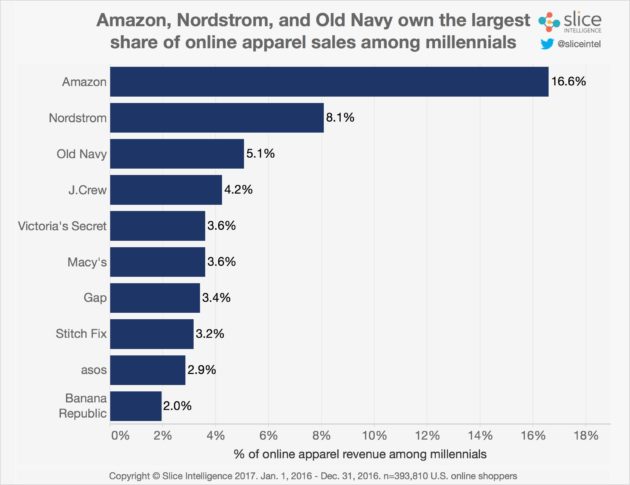 Amazon might not be your first guess as millennials’ favorite online fashion brand, but the latest study is part of a broader trend. Last fall, research group Cowen & Co projected that Amazon’s clothing and accessory sales will rise by 30 percent this year, making it the largest clothing retailer in the U.S.

The company is making an aggressive push into apparel. Last year it launched seven private-label clothing brands and last month reports surfaced about the launch of an Amazon-owned line of $10 bras. Job listings also indicate Amazon is working on its own line of active-wear.

Amazon has long been a marketplace for third-party clothing sellers but the company has lately been infatuated with in-house brands, which typically earn retailers higher margins. It’s the latest example of Amazon flexing its muscle in the e-commerce world and taking more ownership of the entire retail process.