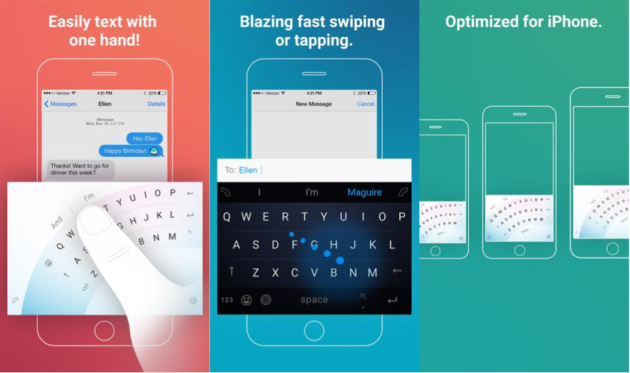 Microsoft has pulled the Word Flow keyboard, an app designed to bring typing capabilities from the Windows Phone to iOS.

The app has been pulled from the iOS store, and a Microsoft site dedicated to experimental projects encourages users to download its SwiftKey app, as first reported by Windows Central. Word Flow combined predictive capabilities, also found on SwiftKey, one-handed mode, custom backgrounds and search functions for things like GIFs and restaurants.

Word Flow’s most striking feature was the optional curved keyboard called Arc, meant for easier use when typing one-handed. Since everything is within a thumb’s reach, swiping around the curved layout was a little more comfortable and quicker than the standard straight keyboard.

The keyboard came out of Microsoft Garage, the group behind some of Microsoft wackiest projects, including the alarm that forces you to make faces to shut it off and the AI that IDs dog breeds.

Though Microsoft’s Windows Phone and associated operating system didn’t catch on, it has retained a fundamental role on competing platforms by acquiring influential iOS and Android apps. SwiftKey is an example of that.

Last year, Microsoft paid a reported $250 million for the London startup. At the time, Microsoft said SwiftKey’s keyboard powered more than 300 million Android and iOS devices, giving the Redmond tech giant unique insights into the behavior of those users.