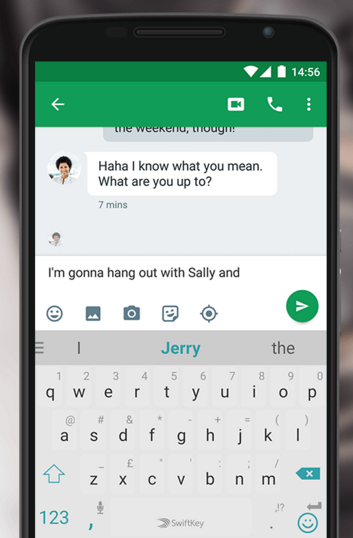 Microsoft is reportedly paying $250 million to acquire SwiftKey, the London-based startup company whose keyboard applications make it simple to input text on Android and iOS devices.

The Financial Times reports that the deal — which will bring SwiftKey founders Jon Reynolds and Ben Medlock about $30 million each — is expected to be announced this week. A Microsoft spokeswoman tells GeekWire that “we have nothing to share.”

SwiftKey launched an Android app in 2010 and arrived on the iPhone in 2014, and it is now offered on about 300 million mobile devices worldwide.

The company has long competed against Swype, the Seattle-based predictive text-input keyboard that was acquired by Nuance in 2011. Both allow easy text input on small screens, providing an accurate way for users to type quickly while on the go.

The company writes that the app introduces “hassle-free” typing for users:

SwiftKey Keyboard uses Artificial Intelligence to automatically learn your writing style, including the emoji you love to use (if you use emoji), the words that matter to you and how you like to type. That means autocorrect and predictive text that actually works because it adapts to you.

Backed by Accel Partners, Index Ventures and Octopus Investments, the 8-year-old company claims more than 150 employees in London, San Francisco and Seoul, according to the Financial Times.  The report notes that Microsoft was especially interested in the artificial intelligence team at SwiftKey, with many on the team expected to join Microsoft Research under the direction of Harry Shum.

Microsoft has acquired a number of popular apps in recent years, including MileIQ, Acompli, Sunrise, and to-do list app Wunderlist.