An innovative way to buy homes. Virtual reality that allows you to feel. And a high-tech football helmet that’s designed to reduce concussions.

It’s time to meet The Seattle 10, our annual list of 10 of the most exciting and groundbreaking startups from the Seattle region. These cutting-edge companies cross a range of industries — from cloud computing to artificial intelligence to healthcare — and offer a glimpse into future technologies that may emerge from our region. 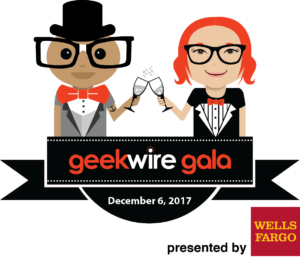 Now in its fifth year, The Seattle 10 program — presented by the Museum of History & Industry — goes much further than simple recognition.

We’re putting our entrepreneurs to work, asking each of The Seattle 10 winners to reproduce their business ideas on giant six-foot by six-foot cocktail napkins that will be unveiled for the first time at the big GeekWire Gala on Dec. 6th at MOHAI. You can come see the unveiling of those creations by getting your Gala tickets here — also joining one of the best holiday parties of the season.

We received dozens of fantastic nominations this year, making it an especially challenging task for our illustrious panel of judges — Alliance of Angels managing director Yi-Jian Ngo; angel investor Sarah Imbach; Pioneer Square Labs co-founder Ben Gilbert; MOHAI executive director Leonard Garfield; and Madrona Venture Group managing director Soma Somasegar — to help pick the winners. In order to qualify, companies had to be based in the Seattle area with a world-changing business idea.

Here’s a look at this year’s class. Congrats to all of the winners!

Fast-growing Amplero emerged on the scene last year with its AI-based marketing tools, unleashing a new way for companies to optimize customer interaction and loyalty.  The Seattle startup — a spinout of marketing company Globys — then reeled in $17.5 million in venture funding in August from Greycroft Partners, Ignition Partners, Wildcat Venture Partners, Seven Peaks Ventures and Trilogy Equity Partners. But the company is not relying solely on venture capital to build its business, lining up customers like Sprint, Virgin Mobile, Microsoft, BECU and DoubleDown Interactive.

Led by veteran technologist Olly Downs, who previously worked as chief scientist at AdReady, Atigeo and Mindset Media, the company is now expanding into categories such as travel, retail and consumer technology.

“With AI at the core of their marketing, enterprise brands can now scale the kinds of experiences that feel uniquely relevant,” the company wrote in its nomination submission. “Customers can build reciprocal relationships with brands over time, and feel known, respected and valued. It’s not just marketing automation. It’s not just personalization. It’s about creating human interactions at a scale not humanly possible.”

It’s one thing to strap on a headset and enter a virtual world. It’s another to actually feel the size, shape, weight, texture, and temperature of objects as you immerse yourself in a virtual environment.

HaptX wants to make virtual experiences indistinguishable from real life. The startup, backed former Twitter CEO Dick Costolo and others, has developed “haptic textile” that works with virtual reality hardware and gives users the sensation of touch as they experience virtual reality.

“Virtual reality is about immersing yourself in a virtual world that doesn’t physically exist,” HaptX CEO Jake Rubin said last year. “With today’s technology, you can see that world and you can hear that world with pretty good fidelity. But the biggest and most obvious missing piece is touch.”

HaptX is initially focused on selling its product to customers working in industries like design and manufacturing, training and simulation, and location-based entertainment. The company is based in Seattle with an engineering office in California.

The housing challenge in Seattle and other urban communities is acute, with rising rents in many cities and a perplexing homelessness crisis that’s hard to solve. Can an ex-Amazon product manager with a lifelong fascination with shipping containers fix this painful problem? Aaron Holm is the founder of Blokable, a 20-month old Seattle upstart that’s creating sleek and environmentally-friendly modular housing units.

“Our mission is to make housing accessible and affordable for everyone, and we think to do that you need to make fundamental change in the process of how we build it,” Holm told GeekWire earlier this year after the company scored $4.8 million in venture funding from Paul Allen’s Vulcan and others.

Blokable’s 260-square-foot MicoBlok modular units are pre-fabricated in a warehouse in Vancouver, Wash. They sell for $58,000 unfurnished, and $85,000 for a fully-furnished unit. The company’s first projects, which include full bathrooms and kitchenettes, focus on affordable and workforce housing developments, student housing and senior living. But Holm has bigger plans, too. And he’s hopeful that the efficient and technology-powered systems his company implements will help solve one of the biggest challenges today in urban communities.

It’s a time of uncertainty for those trying to navigate the U.S. immigration process, and Boundless wants to lend a helping hand.

The Seattle startup, which came out of stealth mode and announced a $3.5 million funding round this past April, is initially focused on helping U.S. citizens and Green Card holders apply for visas for their spouses.

“The immigration process is opaque, intimidating, and high-stakes,” Boundless CEO Xiao Wang said in April. “As an immigrant, I know how frustrating the waiting process can be, particularly when your family’s future is on the line. I am dedicated to giving everyone the information and tools they need to confidently and successfully navigate the legal immigration process.”

Boundless is a spinout of Seattle startup studio Pioneer Square Labs. Its co-founders boast major tech credentials and five of the company’s six staffers went through the immigration process themselves.

Fresh off a $25 million venture funding round, Heptio is firing on all cylinders. The Seattle startup, founded by Joe Beda and Craig McLuckie, builds open-source software projects designed to make Kubernetes easier to use when managing containerized applications. Kubernetes is one of the key building blocks in helping developers simplify how they deploy software.

McLuckie and Beda know a thing or two about this complex technology, since they were two of the original creators of Kubernetes when they worked at Google.

“The opportunity we’re seeing inside the Kubernetes ecosystem is relatively unparalleled,” McLuckie told GeekWire earlier this year after raising cash Accel Ventures, Lightspeed Ventures and Madrona Venture Group. “We see a huge body of work that we need to do with the community to see Kubernetes fulfil the promise of cloud-native computing.”

Previously on GeekWire: Heptio raises $25M Series B funding round as Kubernetes takes over the world

Loftium is looking to shake up the housing market with a new model that helps homebuyers with their down payments. The Seattle startup will pay part of a down payment to those who are willing to rent out a spare bedroom in their new house on Airbnb and split the profits. It’s an innovative idea that launched in September to much fanfare.

Based on early interest, Loftium is expecting its business to scale rapidly.

“Our goal is to become a standard, almost like a parental gift,” Loftium co-founder Yifan Zhang said last month. “The parental gift wasn’t always a thing. It had to become a thing that’s accepted by most banks. We want Loftium to also become that type of standard where anyone in any expensive city, where the down payment is a hurdle, has access to Loftium funds if they’re willing to rent out an extra bedroom.”

Previously on GeekWire: Loftium will help you buy a house if you agree to Airbnb a bedroom and split the profits

Phytelligence scored $6.95 million from Cowles Company and WRF Capital in July, money it will use to continue to expand the marketing efforts of its agricultural science. To date, the 70-person company has delivered more than one million plants to growers and nurseries around the country.

Concussions and other head-related injuries are a huge problem in football, but new technology and engineering could make a difference.

That’s what Vicis is betting on, at least. The Seattle startup, which spun out of the University of Washington in 2013, has developed a new helmet that features a unique design meant to mitigate the forces thought to cause concussions.

The helmet finished first in the NFL’s 2017 Helmet Laboratory Testing Performance Results, and some NFL players are now wearing it during games.

Vicis, which has raised $40 million from investors, could play a key role in curbing the concussion problem for not just pro football, but many other sports.

“There are a lot of parents sitting around the dinner table throughout America, concerned about their kids playing football and other contact sports like girls soccer, for example,” Vicis CEO Dave Marver said during a tour of the company’s production facility. “We feel like we have a group of engineers that has developed a lot of expertise and is deeply committed to helping people. We want to take what we’ve learned in developing this football helmet and extend that into other sports.”

The Seattle startup has found success with its marketplace that matches certified car repair experts with those needing a fix.

The company initially limited its services to oil changes, tune-ups and basic brake repair, but high demand led Wrench to expand services to cover almost anything that a shop or dealership would provide. Wrench raised a $4 million round earlier this year.

“Wrench continues to invest in its technology, which provides a huge advantage in this industry, and the hiring of the highest quality mechanics,” Wrench CEO Ed Petersen told GeekWire.

Wrench said it saves people an average of 2.4 hours of travel and wait time; it also claims to be as much as 30 percent less expensive than car dealership service bays, while its prices are on par with independent car repair shops.

Previously on GeekWire: ‘Uber for car repair’ startup Wrench raises $4M for service that brings a mechanic to your vehicle

There is no end to pressing needs in the healthcare industry and now former Swype leaders Mike McSherry and Aaron Sheedy are using technology to help doctors prescribe digital treatments.

The entrepreneurs last year founded Xealth, which spun off from hospital network Providence Health and Services and raised a $8.5 million round in June.

Xealth is a cloud-based digital platform that allows doctors to send digital treatments like instructional videos to patients. Its platform lets hospitals take advantage of materials from digital vendors and integrates with existing digital tools, like electronic medical records (EMRs).

“Healthcare’s just such a big challenge for the U.S. right now,” Sheedy said in June. “It felt like that big problem for all of us was worth attacking, and it seemed like it was also well poised to get disrupted digitally.”