The Fisherman’s Terminal in Seattle might be the last place you’d expect to find a company that is aiming to keep NFL players safer on the field.

But nestled in between the fishing vessels and seafood wholesalers is where Seattle startup Vicis is making hundreds of high-tech football helmets that will be worn by NFL and NCAA players this upcoming season.

GeekWire toured the recently-opened 3,000 square-foot production facility that is pumping out hundreds of Vicis’ ZERO1 helmets which are designed to mitigate the forces thought to cause concussions.

The production facility has the feel of a car manufacturing plant mixed with a science lab in a busy building that could play a key role in curbing the concussion problem for not just pro football, but many other sports. 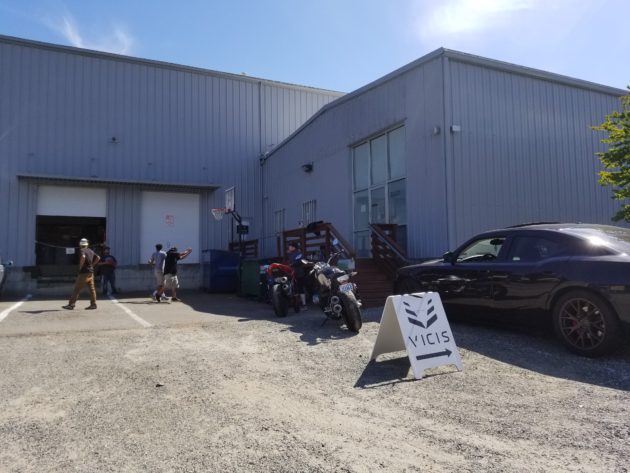 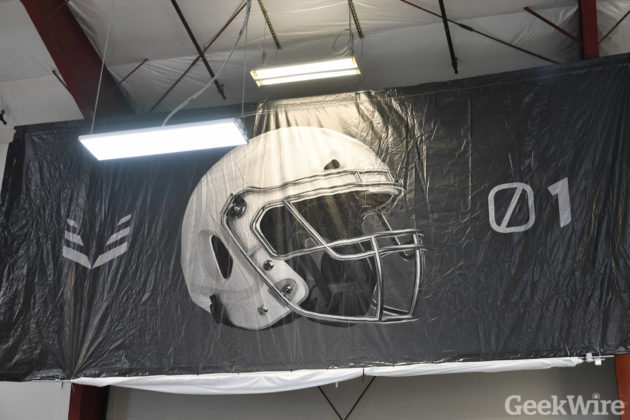 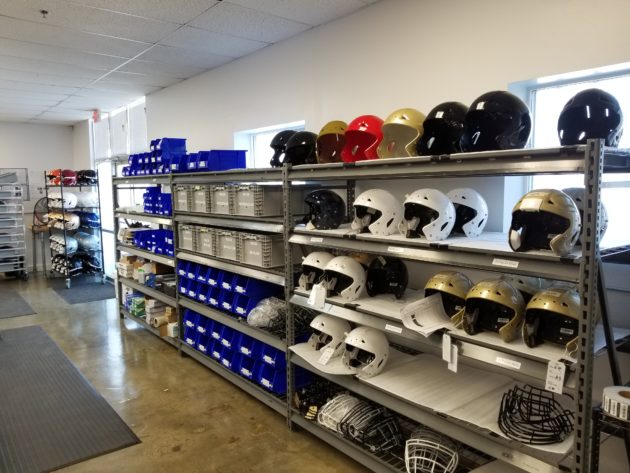 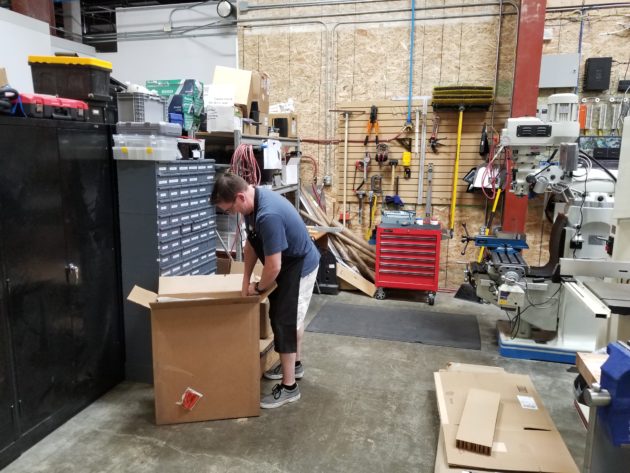 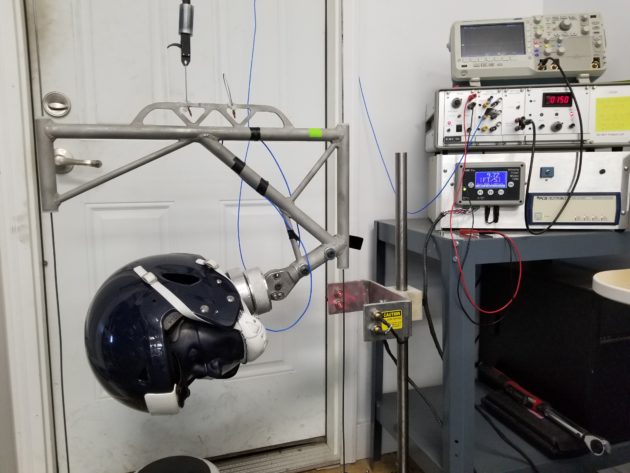 The helmet itself, which retails at $1,500, is the result of more than three years of research and development led by CEO and medical device industry veteran Dave Marver; CTO Per Reinhall, head of the UW’s mechanical engineering department; and Chief Medical Officer Samuel Browd, medical director of Seattle Children’s Hospital Sports Concussion Program.

From the outside, the ZERO1 looks like a normal helmet. But inside is where the secret sauce lies.

“There’s a lot of engineering in this helmet,” Marver told GeekWire.

Unlike traditional helmets, the outer shell on the ZERO1 is deformable and yields much like a car bumper upon impact. There is also a layer of flexible columns in the helmet that can absorb impact before it reaches a head.

“The reflex layer is the magic that makes the helmet work,” said Vicis VP of Operations Bill Setter, a former Precor and Second Wind Energy executive who joined Vicis last year. “It absorbs a lot of energy from a collision.”

In addition, there is a hard, thin inner shell. The inner liner, meanwhile, is customizable depending on a player’s most comfortable fit. 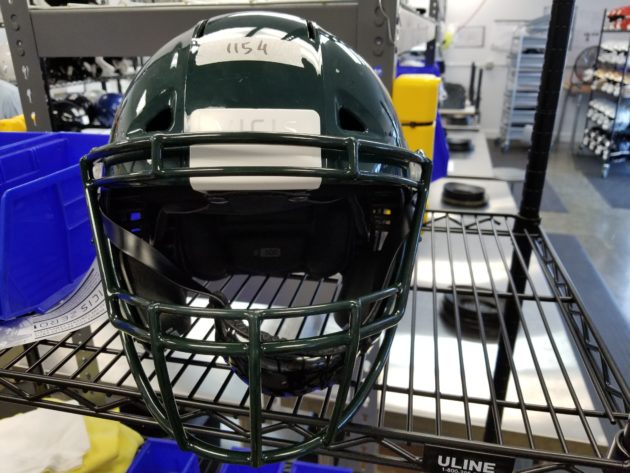 Vicis also developed a series of titanium facemasks based on player feedback. Marver said the helmet has the widest field of peripheral view of any helmet on the market.

“That’s both a safety and performance attribute,” the CEO explained. “Players can see more of the field and locate the ball more quickly. They’re also less likely to be blindsided by a hit or blocker coming their way.”

Painting the helmets is a meticulous process. Each team has a specific color they’ve developed and it’s up to Vicis to replicate that. The company has a special custom-built “tint room” where “all the color matching magic happens,” noted Setter. 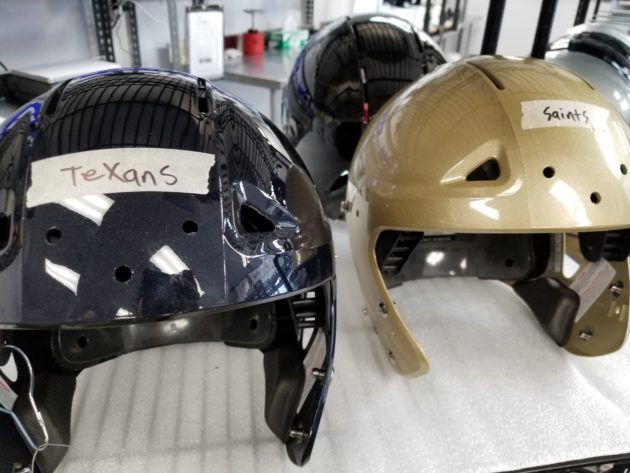 Vicis recently garnered national attention after its helmet finished first in the NFL’s 2017 Helmet Laboratory Testing Performance Results, which assessed 33 helmets that could be worn in the upcoming 2017 season and determined which was best at reducing head impact severity experienced by players during games.

Vicis, which spun out of the University of Washington in 2014, has shipped its helmet to nearly every NFL team — almost half have officially placed orders for more — and a variety of top college football programs. Some high school athletes will be testing the helmet soon, too.

NFL players tested the feel of Vicis helmets during non-contact practice this spring; another test will come later this summer when tackling is allowed.

Marver said the ZERO1 is the most “extensively-tested helmet in history.” After nearly four years of R&D, the company is excited to see how players react to the ZERO1 during actual games.

“We hope to make a big difference out there,” Marver noted.

The ultimate goal for Vicis, which has raised $40 million to date from investors ranging from former NFL stars to biotech industry veterans, is to bring the price point down so it can offer its products to younger athletes.

“There are a lot of parents sitting around the dinner table throughout America, concerned about their kids playing football and other contact sports like girls soccer, for example,” Marver said. “We feel like we have a group of engineers that has developed a lot of expertise and is deeply committed to helping people. We want to take what we’ve learned in developing this football helmet and extend that into other sports.”

The CEO noted that it was important for Vicis produce the helmets in the U.S., and specifically in Seattle, where its South Lake Union headquarters sits nearby other tech companies like Amazon and Facebook.

“We are proud to be in Seattle,” Marver said. “We feel like we can create an enduring company that creates a lot of cool jobs and makes a difference for a lot of people.”