Seattle-based startup Vicis has its high-tech helmet on the NFL playing field this month as several players are trying out a new way to protect their head from injury.

As we reported earlier this month, a handful of Seahawks have been testing the Vicis helmet during practice and preseason games. Cliff Avril, a ninth-year defensive end who was named to the Pro Bowl last season, told GeekWire that he wanted to try something else that might help keep him safer on the field. He and his wife did some research and decided to give Vicis a try.

“I like it so far — it’s different,” Avril said after Seattle’s 26-13 win over Kansas City last week. “It’s not as hard as the other helmets. It’s a little bit heavier, but I definitely like it.”

The $1,500 ZERO1 helmet, priced higher than existing options, features a unique design that is meant to mitigate the forces thought to cause concussions. Unlike traditional helmets, the outer shell on the ZERO1 is deformable and yields much like a car bumper upon impact. There is also a layer of flexible columns in the helmet that can absorb impact before it reaches a head.

“You don’t feel the thuds as hard as they normally are,” Avril said. 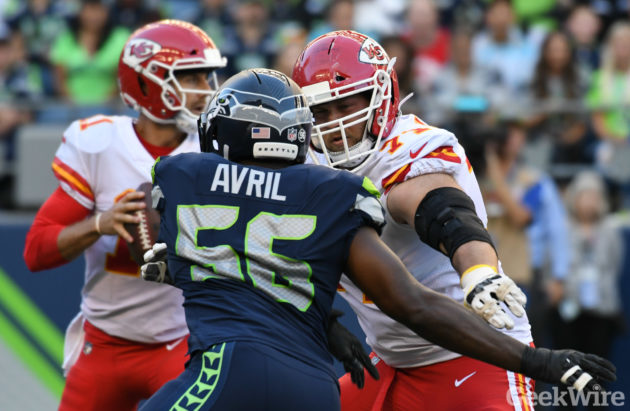 The helmet finished first in the NFL’s 2017 Helmet Laboratory Testing Performance Results, which assessed 33 helmets that could be worn in the upcoming 2017 season and determined which was best at reducing head impact severity experienced by players during games. 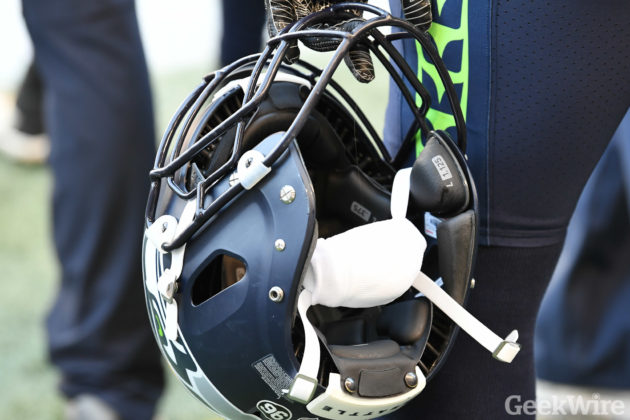 Fullback Marcel Reece, who spent eight seasons with the Oakland Raiders before joining the Seahawks last year, also wore the Vicis helmet during Friday’s win over Kansas City. He read up on Vicis and saw some of the test results before ultimately deciding to try out the new helmet.

Reece also said it feels a bit heavier and noted how it offers a wider field of view than traditional helmets.

“On actual impact it is a little more comfortable,” he added. “You don’t really feel that initial movement in there.”

Other players like quarterback Russell Wilson, offensive lineman Justin Britt, and wide receiver Doug Baldwin — who is also an investor in Vicis — are wearing the helmet.

Star cornerback Richard Sherman wore the helmet during Seattle’s 20-13 win over Minnesota on Aug. 18, but had switched for Friday’s game against Kansas City.

Vicis CEO Dave Marver told GeekWire that Sherman, who is on the company’s Coalition, has been “very happy with the comfort of the ZERO1,” but wants to continue experimenting with other helmets this preseason before Week 1 kicks off next month.

“Richard is a thoughtful guy and for him, changing helmets is a process,” Marver said.

Reece noted how it can be difficult to convince NFL players to change their helmet, especially when they’ve been using something for years.

“We are locked into these certain routines, and it’s kind of hard to change out of them,” he said. “But once you start doing research and realize your health is more important than anything else — than the look, than the feel — then guys will start changing.”

During Friday’s game there were also Vicis helmets on the Chiefs sideline; quarterback Alex Smith is another investor in the company and wears the helmet.

Players on others teams like the Houston Texans are wearing the helmet. Vicis has shipped its helmet to nearly every NFL team — almost half have officially placed orders for more — and a variety of top college football programs. Some high school athletes will test the Vicis helmet this season, too.

In June, GeekWire toured Vicis’ 3,000 square-foot production facility in Seattle that is pumping out hundreds of ZERO1 helmets.

Vicis, which has raised $40 million from investors, could play a key role in curbing the concussion problem for not just pro football, but many other sports. Last month, a new study examined the brains of 111 deceased football players — 110 of them were found to have CTE, the disease caused by repeated impact to the head.