LAS VEGAS — Former San Francisco 49ers star quarterback Joe Montana is just one of the many attendees at this year’s Consumer Electronics Show who is enamored with the idea of virtual reality.

Montana, who runs a seed-stage venture capital firm by the name of Liquid 2 Capital, spoke on a panel today at the big tech expo, gushing about the prospects of how VR can transform sports, both for fans and players.

“Especially, for a quarterback, the biggest part of that is mental preparation, and what you see and how you see it, and the views that you are getting from (VR) — I went and looked at a company down in Palo Alto, and I was just blown away by what that technology is,” said Montana. “I wish I had had it when I was playing, because I got tired of going and watching video back-and-forth, back-and-forth and practice film. Here, I could go out and practice again, and run all of those plays again.”

(Just imagine how much better Montana could have been if he had VR!)

It will allow these kids and players to be able and go in and get better day-by-day without physically getting beat up everyday at practice.

Several NFL teams are already using virtual reality to help players prepare, and Montana thinks that will only continue. One of the reasons is that the union bargaining agreements limit how much time players can actually spend on the field banging into one another.

“They have technology now where these guys can go in and practice and play practices — blitzing, everything — on your own and it can monitored and sent back to the coaches,” said Montana. “It will allow these kids and players to be able and go in and get better day-by-day without physically getting beat up everyday at practice.”

Montana, who won four Super Bowls with the 49ers,  also said that virtual reality will transform the fan experience, allowing casual sports fans to experience what it’s like on game-day.

“I wish everybody could experience a Sunday afternoon on the field with the excitement of the game, and the competition,” he said. “This gives everybody a chance.” 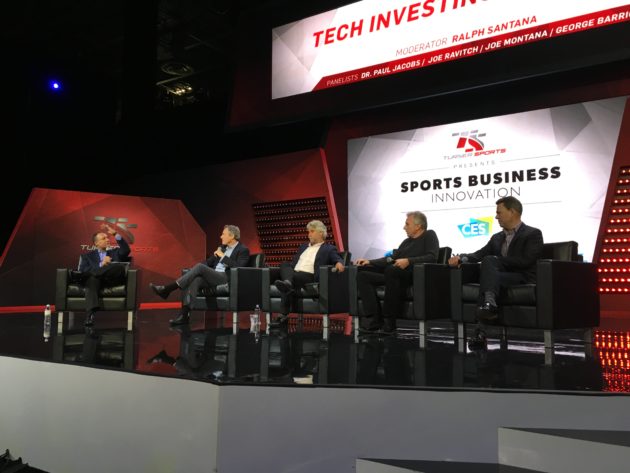 As a co-owner of the Sacramento Kings, Jacobs said that virtual reality can transform how fans watch a game from in the stadium, something the team has been experimenting with at its new high-tech arena. (See previous GeekWire story: A 21st Century sports ‘cathedral’: A sneak peek inside the NBA’s newest high-tech arena).

I wish everybody could experience a Sunday afternoon on the field with the excitement of the game, and the competition. This gives everybody a chance.

“For somebody who buys a very expensive box, those players on the court, they don’t look that big from the box,” said Jacobs. “They can throw on some goggles and feel like they are sitting at the court-side seat.”

Ravitch, a co-founder of investment firm Raine, said virtual reality opportunities will be vast, touching everything from news to live music to sports.

“I think it is a really exciting area, but I view it as an add-on or a supplemental technology to a lot of the existing businesses,” he said. “But I think the sky is the limit in terms of the ingenuity, and the new segments that we are seeing. We get surprised all of the time that somebody shows up with a VR application and it is something you never thought you needed before, and you realize how clever it is and you realize what the monetization opportunity is. I think meaningful commercial revenue is a few years away, but I do think this is the time and you see a lot of capital going into it.”