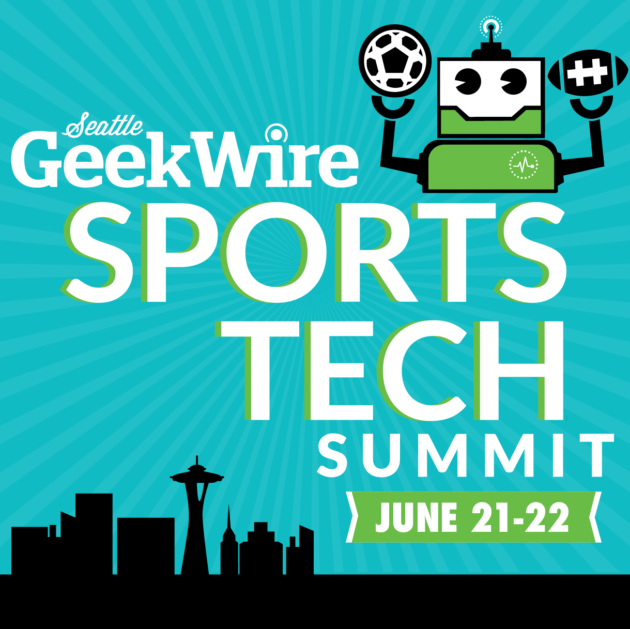 We’re only a week away from the GeekWire Sports Tech Summit, an immersive, informative, and action-packed conference taking place at CenturyLink Field in Seattle on June 21-22.

Limited tickets are still available for this unique event, so make sure to grab yours today before we sell out.

This is our second annual Sports Tech Summit — check out a recap of the inaugural event last year — and we’re excited to bring together the leading thinkers and innovators working at the intersection of sports and technology.

This year’s Sports Tech Summit, co-hosted by our partners at the Seattle Sounders and Eiger Marketing, features an excellent speaker lineup, interactive demos, and fun parties.

So, what’s in store for this event? We just released the full agenda, so you can get a better sense of the lineup and style of the GeekWire Sports Tech Summit. We hope you can join us on June 21-22 at CenturyLink Field in Seattle.

5 p.m. to 10 p.m. — Join us as we kick off the second annual GeekWire Sports Tech Summit with a Welcome Party at CenturyLink Field prior to the Sounders FC match against Orlando City, presented by League.

8:50 a.m. — Brandon Beck, co-founder of Riot Games: A glimpse at the future of eSports from the video game pioneer and co-creator of League of Legends, the online gaming franchise that attracts more than 100 million game players each month.

9:20 a.m. — Dave Finocchio, co-founder and CEO of Bleacher Report: How do younger sports fans consume content? Finocchio will offer insights on how Bleacher Report, a 10-year-old sports media site, is connecting with the next generation of sports fans.

10:45 a.m. — Jerry Dipoto, GM of Seattle Mariners: The general manager of the Seattle Mariners and former relief pitcher will talk about the changing dynamics of baseball, and the technologies that impact his job. Moderated by Root Sports reporter Jen Mueller.

12:00 p.m. — Lunch: Grab your lunch and check out the sponsored talk by CenturyLink on the main stage.

1:00 p.m. — The State of eSports: Bryce Blum, Executive Vice President, Catalyst Sports & Media.  The competitive video game industry, more commonly known as eSports, is the largest phenomenon many people have never heard of. Having transitioned from a marketing engine for games into an independently monetized set of spectator sports, eSports are now garnering investment from traditional sports teams, selling out stadiums around the world, and attracting tens of millions of viewers. Bryce will explore the size and scope of the eSports industry in 2017, and will discuss how the digitally native eSports industry will pioneer new forms of technology from which the traditional sports industry will undoubtedly draw.

1:10 p.m. — The Future of Sports Data: Join Dave Tenney, director of performance and sports science at the Seattle Sounders FC, and Dr. Laila Mintas, deputy president at Sportradar U.S., for a lively discussion about how technology is shaping the way players, coaches, teams, leagues, and fans use and consume sports-related data — both today and in the future. Moderated by GeekWire sports tech reporter Taylor Soper.

1:40 p.m. — Power Talk with Dr. Uma Jayaram, co-founder of Voke: Get the inside scoop on virtual reality in sports from Jayaram, who sold her sports VR company to Intel last fall and is now a managing director for Intel Sports Group.

2:25 p.m. — Break: Hang out with other Sports Tech Summit attendees, and check out sponsor booths and exhibitors. Snacks and beverages provided. Grab a chair massage from sponsor League, or test your running style with Brooks Running’s new Run Signature technology.

3:20 p.m. — Russ D’Souza, co-founder of SeatGeek: A look at the future of sports ticketing and the in-stadium fan experience with D’Souza, who helped launch SeatGeek eight years ago.

4:50 p.m. — Closing Party: Connect with new and old friends and discuss everything you learned at the Sports Tech Summit at this party hosted at CenturyLink Field. Snacks and beverages provided, great conversations guaranteed.

7:10 p.m. — Seattle Mariners vs. Detroit Tigers: Keep the conversations going over peanuts, popcorn and fried grasshoppers! The Mariners are battling the Detroit Tigers on Thursday night, and you can take in the action at Safeco Field. Note: Mariners’ tickets are not included as part of your Sports Tech Summit pass, but you can rally some of your friends and purchase tickets via the Mariners’ site here.