BOSTON — Sue Bird doesn’t consider herself a geek — “I dabble in that world,” she tells GeekWire — but the women’s basketball legend hopes her sport puts more focus toward utilizing data and analytics. 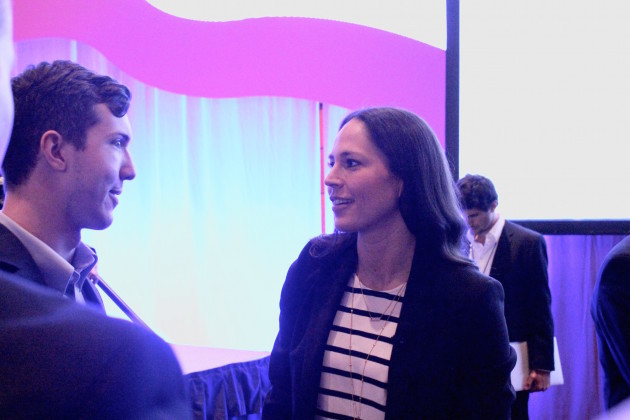 Bird’s appearance at the conference came on the heels of her post in The Players’ Tribune published Thursday that details the how the WNBA lacks the same level of deep statistical data and analytical analysis found in men’s professional basketball and other leagues.

“The disparity between NBA data — even data across all male sports — and WNBA data is glaring,” she wrote. “Data for the WNBA is relegated to basic information: points, rebounds, steals, assists, turnovers, blocks. While worthy of being noted, those are the most rudimentary numbers in our game.”

On Friday, Bird said that having more data available “can change how you are as a player and what you do out there.”

“I try to just take in as much information as I can that I know will help myself, but also my team,” Bird said.

She added that her Players’ Tribune article was meant to “start a conversation” in the WNBA, which has only been around for 20 years.

“We are catching up,” Bird said. “Male sports have been doing this for a lot longer.”

The three-time Olympic gold medalist also noted advances in sports science and how that impacts performance. She said the Storm no longer organizes pre-game shoot-arounds in order to give players more rest.

“It’s changed my world,” said Bird, who re-signed with the Storm last month. “I didn’t realize how lacking in sleep I was until we cut it. Even with that one little change with our sleep pattern, I feel so much better.”

But to me, the more information you have that can make your initial gut feeling valid or not is helpful. You want that, and I’m all for that.

Speaking of sleep, Bird also said she recently started trying out “coffee naps,” a napping method where one drinks a cup of coffee and naps for 30 minutes.

“You wake up and get the benefit of caffeine and a nap at the same time,” Bird said.

After the panel discussion, Bird told GeekWire that while she wants the WNBA using more data and analytics, there still needs to be balance.

“If you’re a general manager, at some point your gut feeling takes over, or if you’re a player, your instincts need to take over,” she noted. “But to me, the more information you have that can make your initial gut feeling valid or not is helpful. You want that, and I’m all for that.”

As far as her own personal technology, Bird said Uber was her favorite app. She’s not a big gamer, but noted that Nintendo NES “was my joint.”

“Aside from the fact that I’m addicted to my phone and my iPad, I’m not really a geek,” she added. “But I do enjoy reading and learning about all of it.”