It was so much fun learning how and why technology is changing the sports we love to watch and play at the first-ever GeekWire Sports Tech Summit on Wednesday at Safeco Field in Seattle.

More than 300 techies, geeks, entrepreneurs, executives, athletes, coaches, team owners, and many others came together for an awesome day all about the budding intersection of sports and technology. 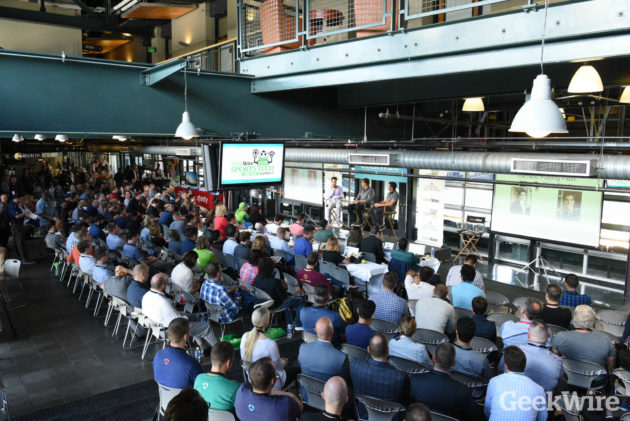 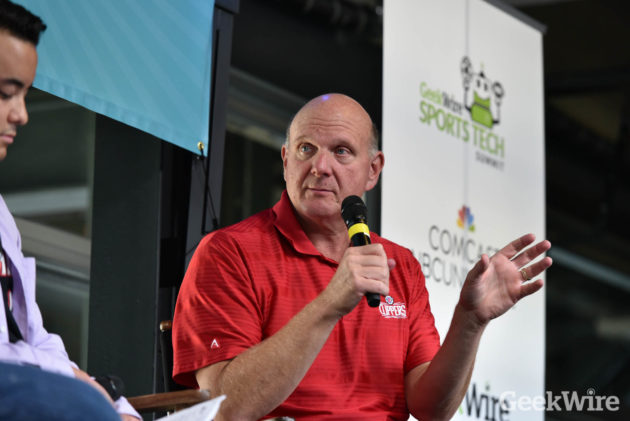 Excited to provide everyone here with the most comfortable socks on earth. #gwsportstech @geekwire pic.twitter.com/iF0vVKbFNL

You can check out our coverage of the event here, and see the chatter on Twitter here. Don’t miss our images on Instagram, too. We’ll be posting more stories and videos from the Sports Tech Summit, so stay tuned for that.

Welcome Party at The Ninety

We kicked off the inaugural Sports Tech Summit with a Welcome Party, sponsored by Microsoft, at The Ninety in Pioneer Square on Tuesday evening. MLS Commissioner Don Garber met with local media, touching on a wide range of topics, while Sounders FC owner Adrian Hanauer addressed the crowd with comments about how technology is impacting sports. 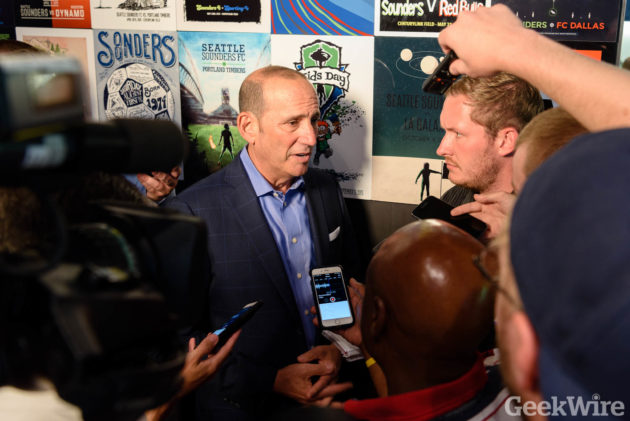 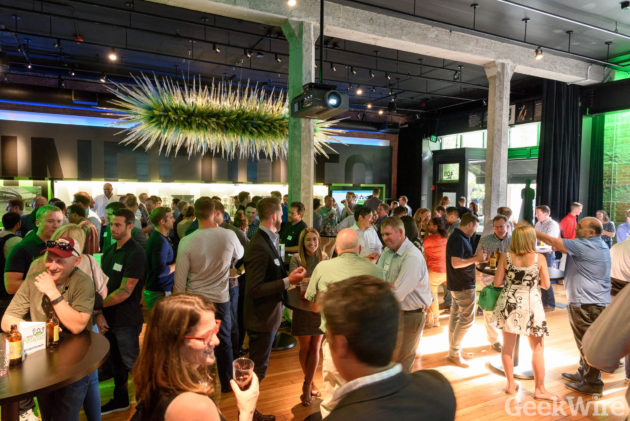 The Future of Sports

What will be leading social platform in sports? "Facebook. Whatever the question is, the answer is Facebook" – Mike Slade #gwsportstech

Customization is the future of our industry. Chris McGuire, adidas #GWSportsTech

Next up was Garber, who shared a ton of insight into why technology and innovation is such a priority for MLS. 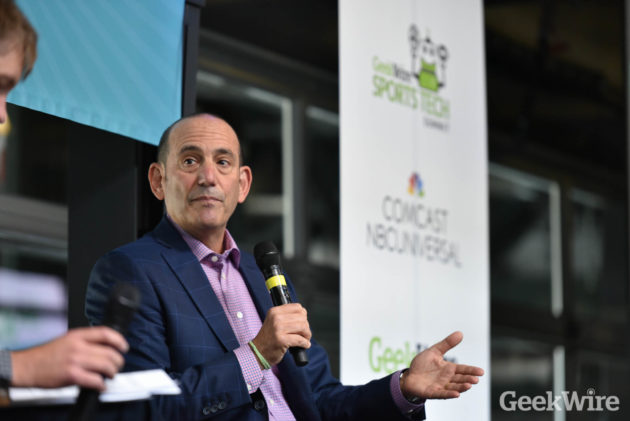 "The average age (of fans) is under 32." MLS Comissioner Don Garber on why technology is so important to MLS. #gwsportstech

Don Garber is up now. This is a really great program. Good job @geekwire. #gwsportstech pic.twitter.com/gQaKyAPT94 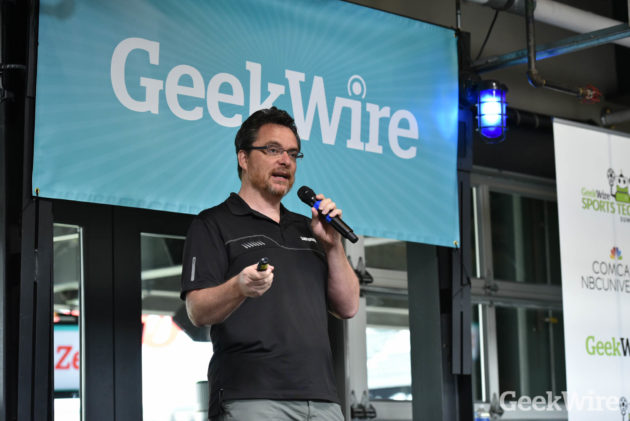 Chartier gave a 20-minute Power Talk about data and analytics in the sports world.

On big data in sports: "It's not about the data, it's about the insight." – Dr. Chartier, Davidson College #gwsportstech

"1st + only 1st question for team sports analytics: What do you (as a team) need?": Tim Chartier #gwsportstech pic.twitter.com/pB0UT3Y3cQ

Jeff Mallett: “Context is king” regarding data in making decisions. Stats “have to be interpreted” #gwsportstech

"Need to make sure when we use technology it is solving problems, pain points." —@SoundersFC owner Adrian Hanauer says. #gwsportstech

"Soccer is the global language. You could tap anyone in the world and say "Ronaldo or Messi?" -Henry Nguyen, LAFC Owner #gwsportstech 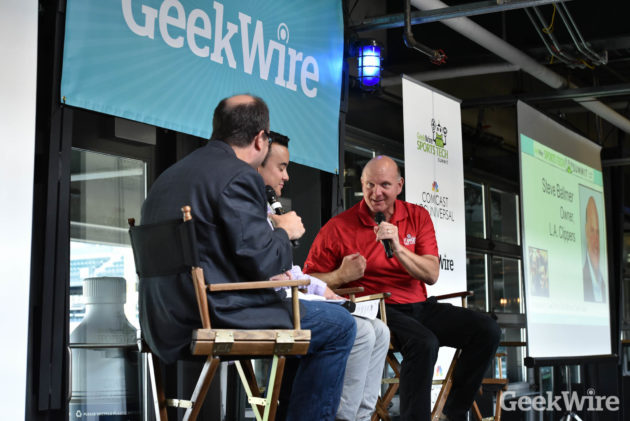 Ballmer then spent nearly an hour talking about one of his favorite topics: sports tech. Here is some of our coverage:

This is the best interview I have seen with @Steven_Ballmer ever. He's relaxed, he's having fun, he is showing his real side. #gwsportstech

Ballmer says as far as sport tech – the thing that most people like at the Clippers is the hyperbaric chamber. #gwsportstech

Ballmer saying an NBA team in Seattle isn't likely in the near future. Not moving the Clips up here. THE MAN HAS SPOKEN #gwsportstech 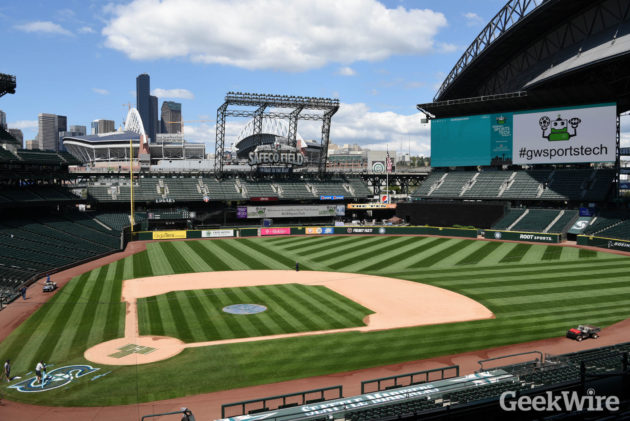 We took a break for lunch, as attendees had a chance to soak in some sun and enjoy skyline views of Seattle from the Safeco Field seats. Some decided to get in a little Pokemon Go. 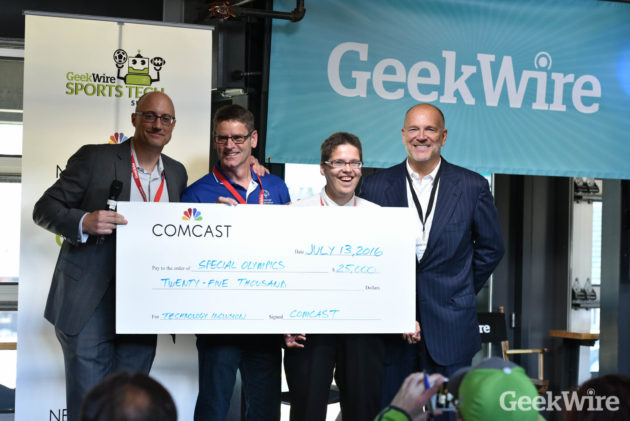 Before heading into our afternoon sessions, former U.S. Men’s National Team goalkeeper and ESPN analyst Kasey Keller introduced Ivanova Smith, a Special Olympian who has competed in bowling, golf, track and field and basketball. Smith talked about how the power of sports has been such a positive influence on her life. Comcast then announced a $25,000 donation to the Special Olympics.

The Next Playing Field: Virtual Reality in Sports Panel

NextVR Chairman Brad Allen and STRIVR Labs CEO Derek Belch joined us for a discussion about one of the hottest topics in sports technology today: virtual reality.

A handful of pro and college football teams are using VR as the next gen of "watching film" as it looks on the field. #gwsportstech

"[VR] can definitely be a community based thing…There will be a social element to VR." -Brad Allen @nextvr #gwsportstech 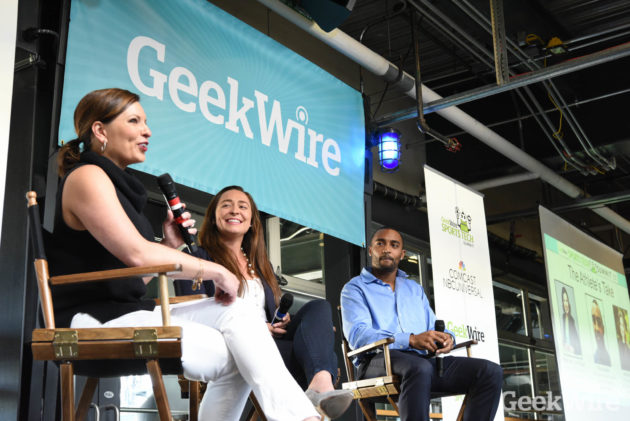 ROOT Sports reporter Jen Mueller moderated a panel with former Olympic swimmer Ariana Kukors and Seahawks wide receiver Doug Baldwin. It was a great look into how athletes think technology improves — or sometimes, gets in the way of — how they perform.

"Use the data — because the data is useful — but it can never replace work ethic.” @DougBaldwinJr #gwsportstech

CEOs of five sports tech startups from the Seattle region gave short presentations about how their companies are developing technology in industries like eSports, wearables, fitness training, and more. 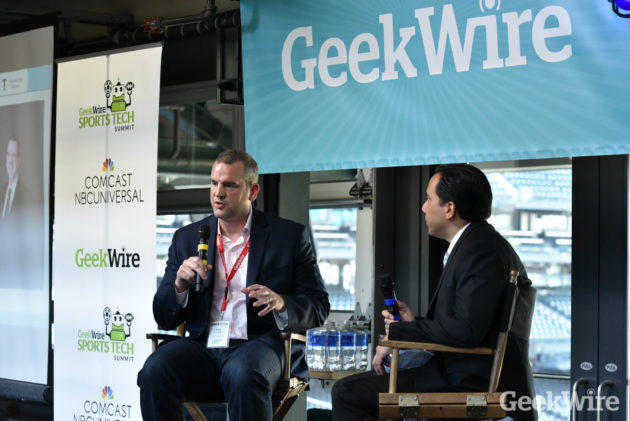 .@rickcordella says NBC's digital properties "aren’t competing with TV. We want to be incremental and complimentary to it." #gwsportstech

The Road to Rio Celebration: The XFinity X-Perience After Party 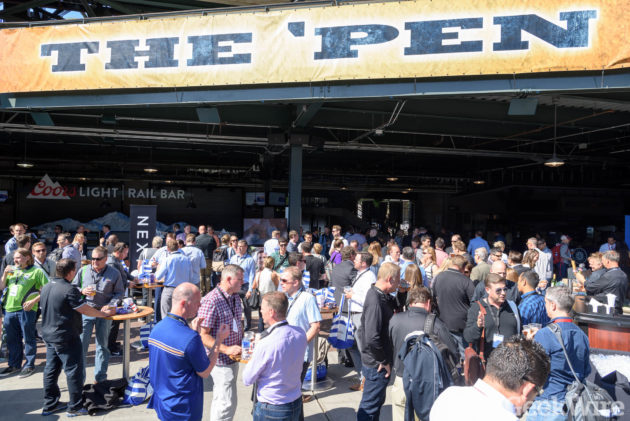 Presenting sponsor Comcast hosted an after-party in the ‘Pen at Safeco Field for networking, interactive demos, a VR experience and more. 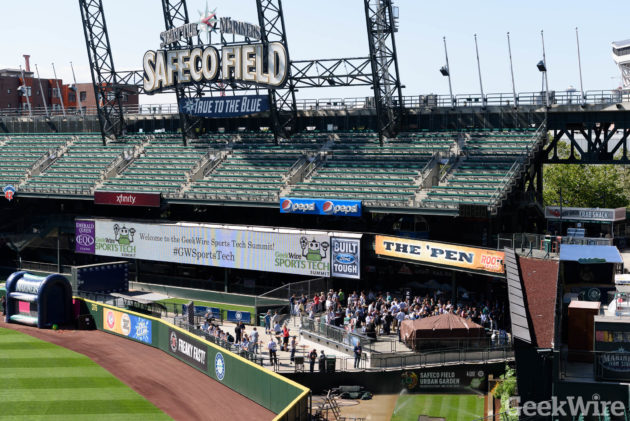 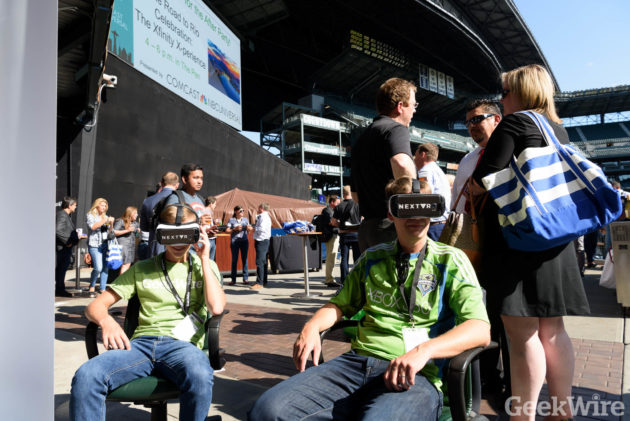 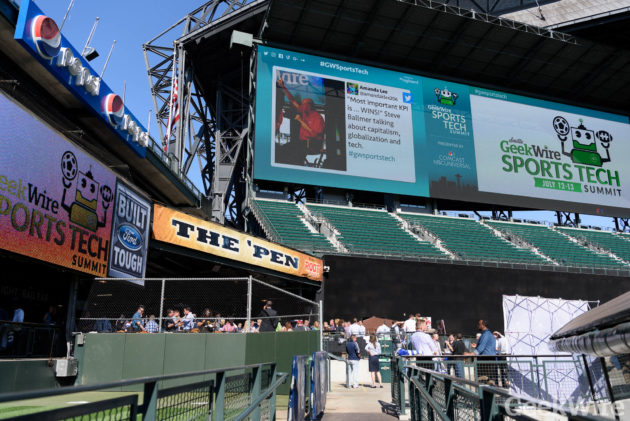 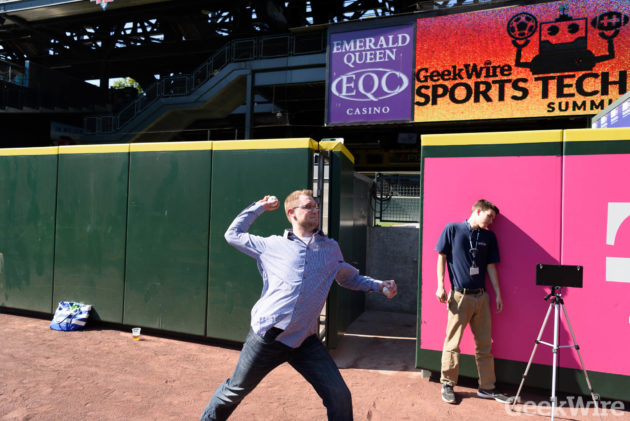 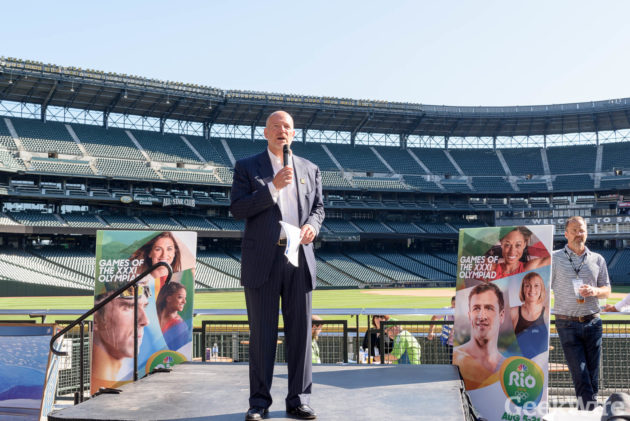 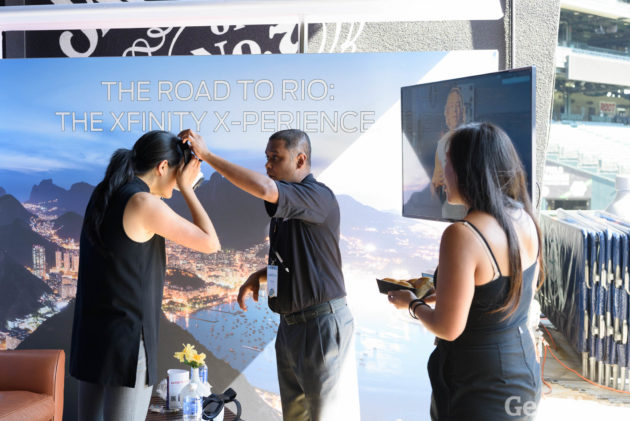 The party continued Wednesday at our fourth annual Sounders Day at the rooftop deck of EMC/Isilon, where more than 400 folks enjoyed enjoy blue Seattle skies, great BBQ and plenty of beer before heading to CenturyLink Field to watch the Sounders destroy Dallas FC 5-0. 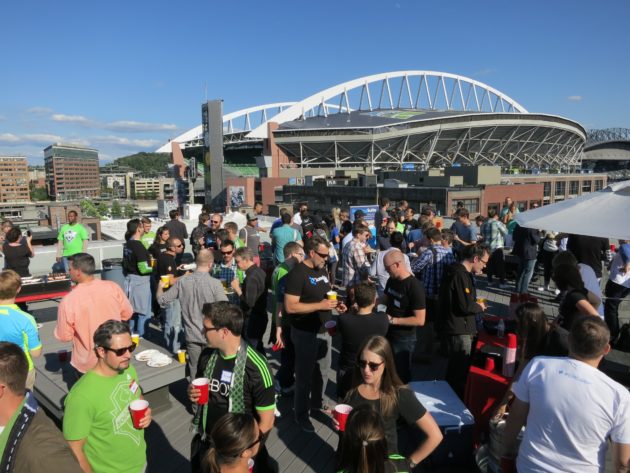 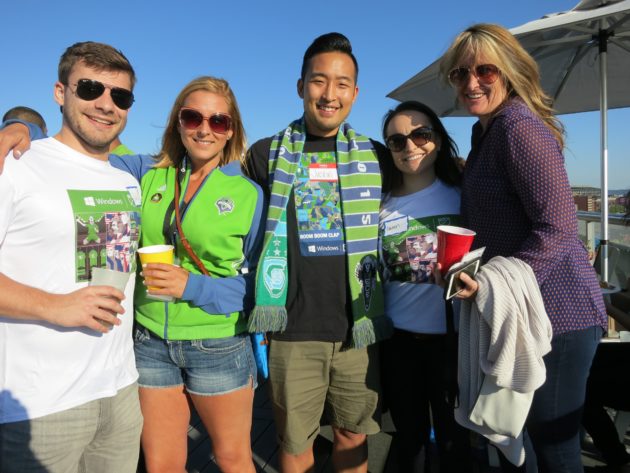 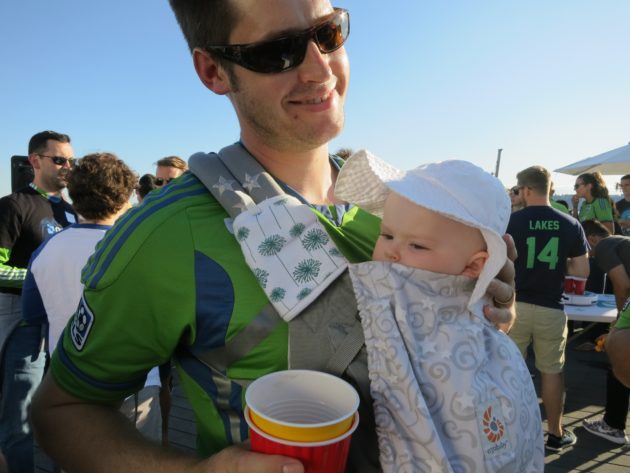 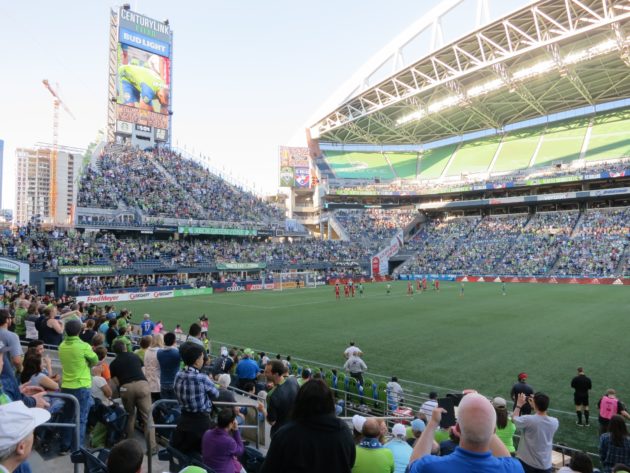 Finishing great day at #gwsportstech with the family at Sounders game. pic.twitter.com/26fQ6zKsSK

In case you missed all of the action, here’s the recap video from the first-ever GeekWire Sports Tech Summit: