Seattle is getting another food delivery service — this time, from Uber. 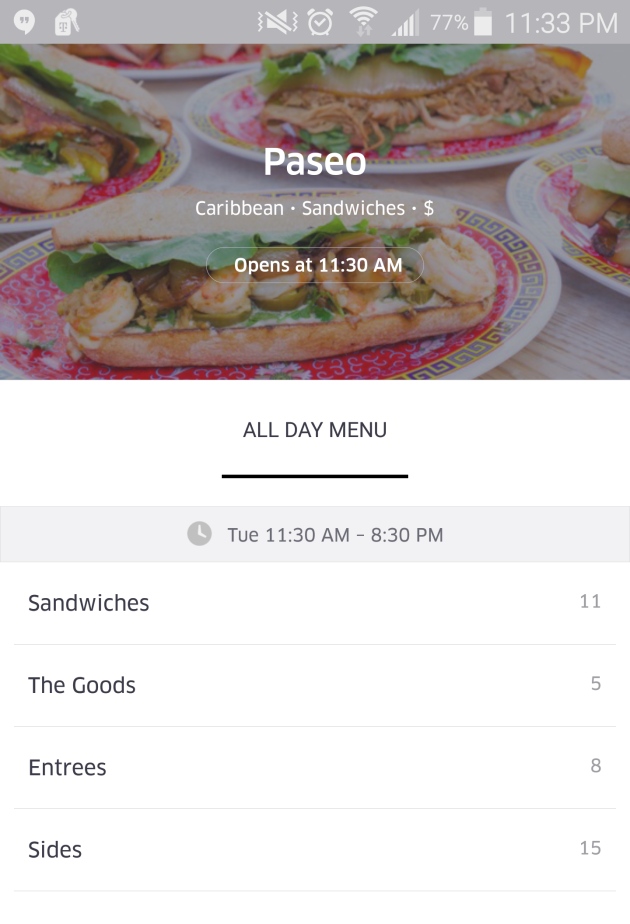 Uber already offered lunch delivery in Seattle via UberEATS starting back in October. Drivers would carry around pre-made meals and deliver them to users who ordered within the existing Uber transportation app.

The lunch service still exists today, but is rebranding into “Instant Delivery” within a “UberEats” dedicated app (iOS and Android) that also now offers delivery from more restaurants every day from 10 a.m. to 10 p.m., rather than just the curated lunches.

You can use UberEats to order food from more than 80 restaurants like Paseo’s, Cedars, 8oz Burger & Co, Sushi Kappo Tamura, and others. Once you submit an order, the restaurant will start preparing your food and an Uber driver will deliver your grub soon later.

“We are very much concerned with maintaining a really high level of quality in terms of the restaurant partners we bring on, and we try to maintain the local flavors,” Rutenberg said. “That does make us different from other [food delivery] companies.”

Delivery will be free for a limited time and Rutenberg said the average delivery fee will eventually be set around $4.99 per order. That’s consistent in Toronto, where Uber first launched restaurant delivery, and in Chicago, Houston, Los Angeles, and San Francisco, where the UberEATS app launched last week.

Along with Seattle, Uber will soon launch an UberEats app other cities like Atlanta, Austin, Dallas, Melbourne, New York, Paris, and Washington, D.C.

Here is where Uber will offer restaurant delivery in Seattle — a much wider delivery range than the original UberEats lunch service, which is available Monday through Friday from 10:45 a.m. to 2 p.m.:

One difference from the UberEATS lunch service is that Uber’s restaurant delivery drivers will get pinged when they are close to a restaurant that just prepared an order and will have the option to accept or decline. That differs from the lunch service, which only operates in or around the downtown area and uses drivers that keep several prepared meals in heated or cooled bags inside their vehicles.

UberEats is Uber’s attempt to utilize the back-end logistics framework built for its ride-hailing service and take advantage of the vast network of drivers the company already has on the roads. Rutenberg noted that Uber’s huge swath of drivers in Seattle — by last count it was more than 10,000 — as another competitive advantage over other food delivery companies in the city. Something like UberEATS also provides another revenue opportunity for Uber drivers beyond picking up and dropping off passengers.

“Whether it’s the ride that gets you from A to B or the food that makes you happy, Uber is there to help you get what you need, when you need it,” Uber wrote in a blog post last week.

Uber, which has raised more than $8 billion, faces a flurry of competition with startups and corporations alike utilizing technology to help get food, grocery items, and other products in the hands of consumers in the most efficient way possible.

Even big tech giants like Amazon — which also delivers groceries via AmazonFresh, a competitor to Instacart — are getting involved, with the Seattle company rolling out a new restaurant delivery service that GeekWire tested last year.

The competition is heated, and some aren’t finding success. Just last week, TechCrunch reported that SpoonRocket shut down after failing to raise more investment — it closed shop in Seattle last year after operating for just four months — while India ride-hailing giant Ola closed its own food delivery services earlier this month just one year after launching them.