David Plouffe thinks a proposed ordinance to help Uber drivers unionize is “puzzling,” and one that may cost the City of Seattle a lot of dough if approved by councilmembers next week.

Plouffe, a former advisor to President Barack Obama who joined Uber last year as a policy executive and has since transitioned to a strategic advisor role, was in Seattle on Friday morning speaking at a Downtown Seattle Association event.

The 48-year-old touched on a number of topics during the hour-long discussion titled “Uber and The Future of Work,” including legislation proposed by Seattle councilmember Mike O’Brien that would offer Uber, Lyft, taxi and other “for-hire” drivers the right to unionize.

Since these drivers are independent contractors and not employees, they are not protected by traditional labor standards — including Seattle’s new $15 per hour minimum wage law — and do not have collective bargaining rights covered by the National Labor Relations Act.

As Uber and Lyft continue to grow — there are now 10,000 Uber drivers in Seattle, Plouffe said today — O’Brien wants to give drivers the ability to negotiate pay rates and employment conditions. The Seattle City Council plans to vote on his bill, which is the first-of-its-kind in the U.S., on Dec. 14.

But Plouffe said today that even if the ordinance is approved by councilmembers, the city may face difficulties with federal lawmakers.

“I think the ordinance is puzzling because it’s generally believed to be flatly illegal, and I assume the courts will look at that if it were to be successful,” Plouffe said. “My understanding is that a couple councilmembers here also asked the Federal Trade Commission to look at this, as they had some concerns about the anticompetitive behavior that this ordinance might be suggesting.”

Plouffe added: “At end of the day, we don’t think it makes a lot of sense and could be something that costs the city a lot of money.” 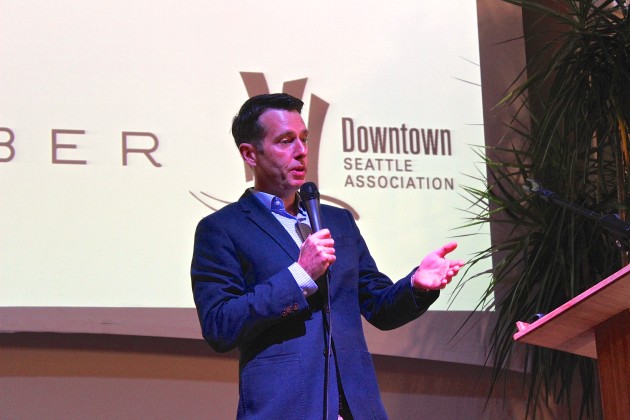 A spokesperson for O’Brien, who is in Paris today for a global climate conference, told GeekWire that neither Plouffe or Uber reached out for a meeting this week. However, one source said that Plouffe did meet with Seattle Mayor Ed Murray on Thursday.

Plouffe answered a few other questions related to how Uber drivers are classified as independent contractors versus employees that receive benefits often provided to those working at traditional private companies. It’s a hot button issue as of late, particularly as other fast-growing “peer-to-peer sharing economy” startups like Lyft, Postmates, Instacart, and others have similar structures in place.

Plouffe noted that policymakers should think about changing rules and regulations for the broader freelancer market if more and more people start freelancing in the next decade, but said he doesn’t think it should be an immediate issue.

“Right now, whether it’s our platform or this general trend, I don’t think this is a problem that needs to be solved,” he said. “I think this is helping solve a lot of problems. The question is, how do we build on it. Because again, when you look at the human impact of how people are able to make additional money and stabilize themselves financially in a way that is consistent with their time needs, it’s a very powerful thing.”

While Plouffe doesn’t think the U.S. will turn into a “nation of freelancers” any time soon, Plouffe noted that more and more drivers are using Uber’s platform as a way to supplement their income or as a financial “bridge” while they look for more permanent work, rather than a full-time job.

For example, Uber — which has 1.2 million active drivers globally — says that 51 percent of its drivers work for 10 hours or less per week. Plouffe said the ability to make some extra cash is becoming even more valuable, particularly since 43 percent of Americans today can’t cover an unanticipated $400 bill, according to Plouffe.

“Every month, the number of hours that Uber drivers drive is going down,” Plouffe said.

When asked if an Uber driver can make a livable wage if they work full-time for the company, Plouffe said it will vary by city and vehicle.

“But generally, this is a very good income,” he said. “Comparing it to other options in the retail industry or restaurant industry, drivers say it’s very good money and in some cases, better. They can also control the terms of engagement in terms of the schedule.”

However, some in the for-hire industry have different thoughts. Dave Sutton, a spokesperson for “Who’s Driving You?” a public safety campaign on behalf of the Taxicab, Limousine & Paratransit Association, isn’t hopeful about the future for Uber drivers.

“Here’s the future of driving for Uber in a nutshell: More unilateral fare cuts by Uber, intensifying competition with unlimited other Uber drivers, and ultimately no work at all when Uber’s driverless cars come online,” Sutton said in a statement.

We’ll have more from Plouffe’s chat in Seattle later on GeekWire, including his thoughts on autonomous vehicles and the 2016 presidential race. Much of his prepared comments mimicked what Plouffe said at an event in Washington D.C. last month, which focused on how Uber — a company now valued at $62.5 billion after yet another reported fundraising round this week — is helping stimulate the economy by giving people a flexible way to make extra income, while also decreasing congestion and improving transportation logistics throughout the world with services like UberPool and more. You can also listen to Plouffe’s talk below.