Ericka Burke wants to defeat fast food and says that her restaurant’s new partnership with Uber can help make it happen.

Burke, owner of Capitol Hill’s popular Volunteer Park Cafe, is one of 50 restauranteurs who have signed up with UberEATS, the new food delivery service from Uber that launches today in Seattle.

Uber held a private launch event for UberEATS Seattle at The VUDE in South Lake Union on Tuesday evening that included tasty dishes from eateries like Sushi Kappo Tamura, Paseo, Skillet, and Burke’s Volunteer Park Cafe — all of which are offering up food on Uber’s new food delivery platform.

“I love the idea that you look at your app and have food that’s just minutes away, so you don’t have to make a bad decision to go to McDonald’s or somewhere else,” Burke told GeekWire. “I think that idea is very much in our wheelhouse and about who we are.” 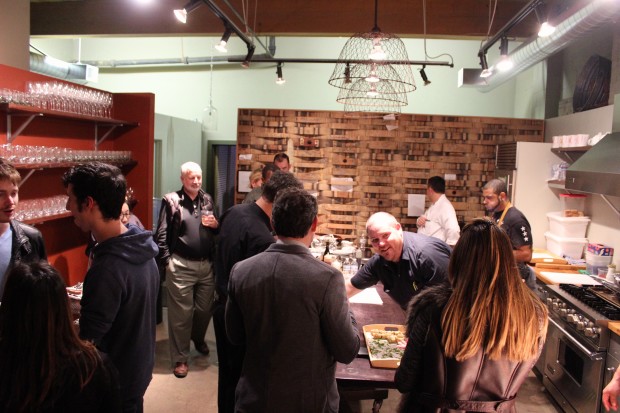 UberEATS, already available in nine other cities, is Uber’s attempt to utilize the back-end logistics framework built for its ride-hailing service and take advantage of the vast network of drivers the company already has on the roads.

The service can be found directly within Uber’s app, which is traditionally used by customers to hail a ride, and lets you order from rotating menu that includes three dishes from local restaurants each day. 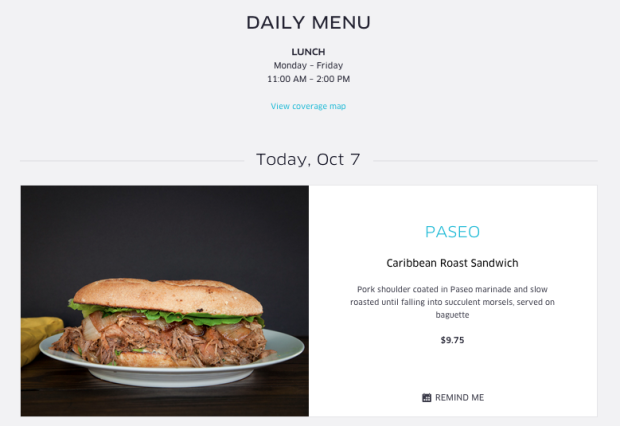 There are many food delivery services in the Seattle region already, including Peach, Lish, DoorDash, Munchery, Square-owned Caviar, Postmates, Bitesquad, Seamless, GrubHub, Yelp-owned Eat 24, and many others that we tested last year. There’s also Amazon, which just rolled out a Prime Now food delivery option that launched in Seattle earlier this month and has not disappointed. 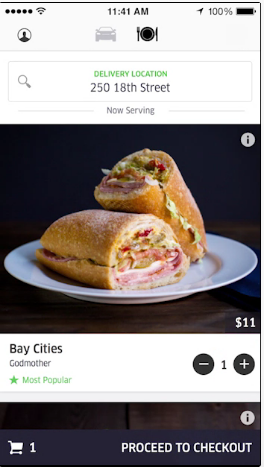 “The tagline for UberEATS, I would argue, is ‘great food at the speed of Uber,'” said Rutenberg, a former Facebook manager who joined Uber to run the new food service in Seattle.

Uber is able to guarantee a delivery time of 10 minutes or less because drivers carry prepared meals in temperature-controlled containers and wait until someone requests a meal drop off. This limits how many food options customers can pick from, but helps Uber deliver meals efficiently.

“The fact that we can deliver within 10 minutes — or sometimes five minutes or less — is something that’s fairly unique and novel,” Rutenberg said.

For chefs like Taichi Kitamura, owner of Sushi Kappo Tamura, the delivery time was what convinced him to partner with Uber.

“With other services, I don’t know how long it’s going to take or who’s handling the food,” Kitamura said. “Uber seems to be more legit.”

Burke echoed that sentiment of trust. She’s had numerous delivery companies approach her over the past few years, but declined to partner with most until teaming up with Seattle startup Lish earlier this year.

“Our food is held precious to the chest and in our venue, but now I realize that there are some people out there like UberEATS doing a good job of delivery,” Burke said. “So now I’m trusting to put my food with them.”

Kitamura, who is offering delivery for the first time, also noted that his restaurant is not open during lunch hours. Now, though, he can earn revenue mid-day without offering a full service upscale lunch at the restaurant.

Rutenberg also touched on this when talking about benefits of UberEATS for restaurants.

“We provide a marketing platform and a sales platform for our restaurant partners,” Rutenberg said.

The lunch delivery hours also provide an opportunity for Uber drivers to make money during what’s usually a slow time for ride-hailing.

“It’s not the busiest time on the Uber platform for transportation,” said Uber Seattle General Manager Brooke Steger. “This is a perfect accent to their businesses and allows them to generate more income.”

“Our ambition was to have somebody open up the menu and be thrilled by what they see,” he said.

Uber is starting with lunch for now, with no plans for breakfast or dinner options in the near future. As we noted, the company faces a bevy of competitors, including Peach, the Seattle startup that just raised $8 million and also offers a limited lunch menu.

“Peach partner restaurants have skin in the game — they own the end-to-end process starting from preparing the food all the way to delivering it straight to the office reception desk,” Singh said when asked how Peach will compete. “So no matter on how many players enter the market with their delivery drivers, our quality of service will be superior.”

Another company to note is SpoonRocket, a San Francisco-based food delivery startup that has raised nearly $14 millio to date. It launched a lunch delivery service earlier this year in Seattle but shut down four months later to “allow us to refine our operations and we hope to make a strong comeback in the fall,” a SpoonRocket spokesperson said.

Also keep your eye on Postmates, which just rolled out an UberEATS-like service called Pop that “brings meals to customers in 15 minutes or less.” The service, which also requires drivers to carry pre-made food, debuted in San Francisco today during lunchtime hours. No word yet on when the service will arrive in Seattle.

Postmates expects to differentiate from Uber and other competitors by offering more than just food in the future. Here’s a statement from a Postmates spokesperson:

“Postmates Pop as a product is the fastest delivery option – so imagine what could be possible outside of just lunch. Delicious, gourmet dinners delivered in under 15 minutes, a bottle of wine and a special meal for Friday date night, and other fun use cases outside of lunch. This is to say our initial launch is only the beginning of what’s possible with Pop and our many merchant partnerships, extensive local fleet, and expertise in food delivery give us an advantage in this endeavor.”

Of course, Uber is also thinking about delivering more than just lunch, too.

“It’s all about figuring out what you can get within minutes,” said Steger, who’s managed Uber’s operations in Seattle since the company arrived here four years ago. “Transportation is hugely important, but we also want to eat and have good, healthy, amazing local food on demand. I’m excited to see this transition and evolution of our product.”

UberEATS will charge $3 for delivery, but the company is waiving the fee for the first month of operation. Uber also plans to donate surplus meals to the Millionair Club Charity.