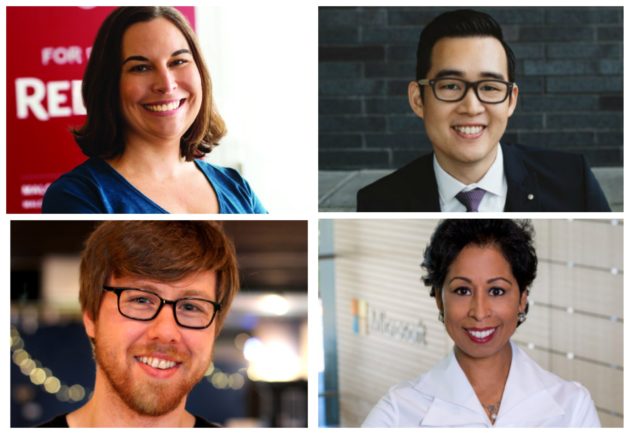 Some of the most important technology of the past year could very well become the story of next year. And the year after that. Such is life at the leading edge of a new frontier.

In our regular Geek of the Week feature, innovators and students and tech gurus from all walks of the Pacific Northwest scene offered their take on what had the most impact in 2016. Virtual reality was a favorite among many. Chatbots, driverless cars, drones, solar energy and the cloud also got a mention.

What do you think was the most important technology of 2016? Check out what our top geeks had to say, and click on the names throughout to go back to each complete Geek of the Week profile.

Linda Weston, executive director of Oregon Entrepreneurs Network: “The advances in drones, and the terrific things they might be able to do, like search and rescue and monitoring forest fires.”

Gwen Houston, Microsoft general manager of global diversity and inclusion: “Windows 10. Currently, there are more than 200 active million devices running Windows 10 since its launch at the end of July. In fact, Windows 10 continues to be on the fastest growth trajectory of any version of Windows — ever — outpacing Windows 7 by nearly 140 percent and Windows 8 by nearly 400 percent.”

William Vaughn, novelist and former Microsoft technical writer: “Technology is rushing headlong into the future — dragging us along whether we like it or not. I see a real opportunity in the advancement of solar technology where the panels are lighter, stronger and produce more power per square inch than ever before. That coupled with new battery technologies, the cost barrier on renewable energy should break our dependency on fossil fuels.”

Timothy Crosley, champion of open source technology at Simple Innovation: “While it still has a way to go, the most exciting technology I see coming out this year is Virtual Reality. It already shows great promise for education and training applications, and when taken to its logical conclusions the implications are huge. Imagine what would be possible if all five senses could be accurately and convincingly simulated with VR?”

Matt Bencke, founder and CEO of Spare5: “Someday our children will look back at 2016 as the year all people finally resolved to preserve our planet. The Paris Climate Accord isn’t perfect, but it is overdue and an important step forward.”

Matthew Neagle, chief customer officer at Porch: “On a smaller and more personal level, it has been access to food delivery — a life saver when juggling the demands of a start-up and a new family. My wife and I love to cook and are raving fans of Acme Kitchen, a local start-up that delivers everything you need to cook a week’s worth of organic and locally produced meals. It has actually saved us both time and money while letting us keep the joy of cooking.”

Steve Case, specialty print technology manager at Xerox: “Driver-assistance technologies, such as automatic braking, cruise control that automatically adjusts your following distance, and sensor technologies that keep an eye on other vehicles. I don’t think driverless cars will play a significant part in the real world for several years, but this kind of tech provides incremental steps in that direction.”

Kieran Snyder, co-founder and CEO of Textio: “Can I say Textio? Seriously, the new wave of learning loop apps in the enterprise.”

Bridget Frey, chief technology officer at Redfin: “Augmented reality. I’ve been fascinated with the technology behind Pokémon Go, the first killer app in the AR space. They found a compelling way to combine mapping technology with gaming dynamics and fitness goals, and I’m excited to see the tech industry will build on these ideas.”

Suzan Levine, United States Ambassador to Switzerland and Liechtenstein: “For us, the Embassy Bern Art in Embassies Google Cultural Institute Exhibition. We became the first Embassy and Residence whose exhibition is available there.”

Peter Bladin, chief impact and research officer at Global Partnerships: “Solar lights (replacing kerosene among the 1.2 billion people who live out of reach of the electric grid. It saves money for the poor, improves their health and saves the environment.”

Adam Warby, CEO of Avanade: “It has to be the Cloud. Even though we’ve been living with cloud platforms, apps and infrastructure for some time, there is always a tipping point with any technology where adoption becomes mainstream — even with regulated industries like financial services and governments. The availability of a truly ubiquitous computing platform with built in intelligence, the so called Intelligent Cloud as Microsoft puts it, is the biggest opportunity business has seen from IT since the PC and the internet. Put this alongside the level of mobility we have today and it’s triggering the greatest shifts in business since the early days of the dot com revolution.”

Sonja Marcus, teen blogger for Soultamer Gaming: “SpaceX’s Falcon 9. The financial and environmental benefits of spacecraft that can land like that would be unimaginably significant.”

Joel Eby, creative team leader at POP: “The HTC Vive is the first headset thingy that turned me on to how good VR can be. Can’t wait to see what groups like Valve Software do with it next.”

Sean Hsieh, co-founder and chief product officer for Flowroute: “Bots, because we’re bringing contextual computing to the places where we spend the most time — in conversations.”

Joey Rodolfo, sportswear designer and founder of Buki: “I think the most important technology this year has been virtual reality because we are starting to see how impactful it is going to be in our everyday lives.”