The POP website currently opens with an overlay of text that reads, “Make things happen.” Joel Eby, a creative team leader, has been doing that at the large Seattle agency for more than 15 years.

As the head of a team of writers, designers and motion artists, Eby gets to make “insanely cool experiences” across verticals that range from games to retail to tech to sports and outdoor. And he gets to do it using channels as diverse as virtual and augmented reality, social media, web and more.

As a nod to his creativity, tech savvy and geeky pursuits, Eby is GeekWire’s latest Geek of the Week.

With a client list that includes Xbox, Nintendo, EA, Ubisoft, ESPN, Nike, Seattle Sounders FC, Major League Soccer, Seattle Seahawks, Amazon.com and many more, we asked Eby what it takes to make something that stands out in a world in which we’re bombarded with so much media on so many platforms.

“One creative principle that’s always stood out is, be unexpected,” Eby said. “Of course there is noise everywhere, but good ‘stuff’ is still noticed when it’s unexpected. It also helps to have a killer strategy and know your audience. If we start our ideation from a place where we can understand the behaviors our audience are prone to, it helps us to immediately focus our ideas and hone the ones we know will go further.”

Eby said a “solid channel strategy” helps POP determine another kind of focus, which is about where engagement can happen.

“Not every brand needs to be on every channel, necessarily,” he said. “It’s much better to have a strategic purpose for a few channels then to merely syndicate content across platforms, or worse yet not have a clear strategy for how a channel is used. Knowing where your core audience is going to be and what behaviors they’re likely to participate in goes a long, long way to gaining that focus.”

Eby says his focus away from the office takes place in a “batcave” full of four kids and “musical mayhem.” He calls himself a lifetime keyboardist who not only jams with friends and family, but also contributes original music tracks to interactive works built by POP.

Learn more about this week’s Geek of the Week, Joel Eby:

What do you do, and why do you do it? “I create marketing experiences for video games and entertainment brands. I’ve been at it with POP for more than 15 years, and it never ceases to be extremely challenging, rewarding and just plain fun. Just like a great game.”

What’s the single most important thing people should know about your field? “We get a lot of asks to create ‘all new’ concepts for games or gamified experiences. Pokémon Go has really turned a lot of people on to what seems like ‘disruption’ of the game space. But the brilliance of that game is that it stays core to what Pokémon games have always been, with just an added layer of really accessible, physical location gameplay. I think a lot of people look at the success of that kind of product and are predisposed to expect that only new ideas, completely original mechanics, can lead the way to success.

A long time ago, there was a dev at POP who told me: if you want to be a great developer, make a game. A game could teach you to assemble intricate coding concepts that would expand your ability to code anything you want. But that’s also true on the creative side.

“The truth of it is that great game experiences are created from a solid mechanic out. The best developers in the world might be the software team at Nintendo, and yeah, they do experiment with a lot of original styles of gameplay, but they also know how to iterate on mechanics that are established and well known and loved. There are a lot more Mario platformer examples than there are Wii Sports variants. So if you look at Pokémon Go as not a new idea but a really good twist on a classic mechanic — collect ‘em all — then you might be more surprised by what you can build on that is a variant of what’s come before.”

Where do you find your inspiration? “It’s all over the place as you might expect. But I love returning to really good video games because one, there are so many of them. And two, there is such a great catalog of cinematic stories combined with interaction and expressive style.

“A long time ago, there was a dev at POP who told me: if you want to be a great developer, make a game. A game could teach you to assemble intricate coding concepts that would expand your ability to code anything you want. But that’s also true on the creative side. It goes way beyond gamification — which is fine, but what I’ve found is that some of the best user experiences feel like games in the way they move and how they move you. Whether cinematically, immersively, through sound and vision or simply through a really good interaction mechanic. The video game business has stuff figured out that you can draw on metaphorically when you’re building out new experiences in lots of other interaction fields.

“I’m also perpetually curious about creativity theory. The excellent series ‘Everything is a Remix’ is something I keep going back to, as well as Creativity, Inc., the book about Pixar’s history and lessons learned.”

What’s the one piece of technology you couldn’t live without, and why? “I’m glued to my iPad Pro. Complete with the folding keyboard thingy and the Apple Pencil that I keep in my hand at all times. If I could only use it to write on regular whiteboards, I think I’d just get it sewn into my right hand or make it retractable like the lightsabers on the old Kenner action figures.” 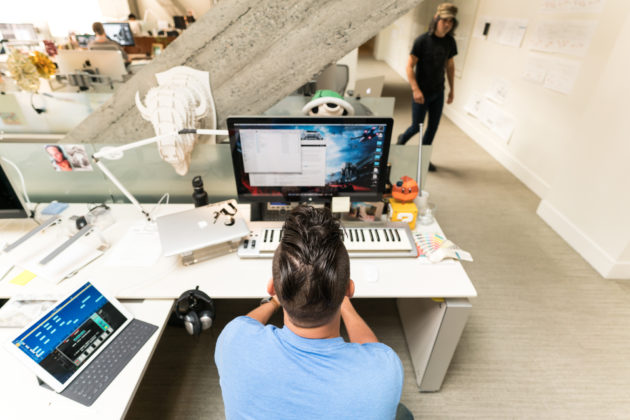 What’s your workspace like, and why does it work for you? “At home I’ve built out a customized ‘den’ for everything music and design related. Even though I have mobile everything, I still need a dedicated command deck. I have four kids and two billion LEGO bricks in the house. I need my fortress of solitude. I designed a custom desk to integrate docking music controller and a large display for the MacBook. Studio monitors, digital pianos and other sound gear round it out with some Star Wars toys hanging around for, you know, when my 4-year-old son wanders into the fortress.

“My POP workstation has become more of a locker. The setup is great and open and adjacent to the designers and copywriters for close collaboration. But for me, it’s become a place to set down my backpack and gear while I rotate through the many “pods” and whiteboards elsewhere in the building. The POP space is open and built for the meeting of minds. Little areas for quick collaboration are all over the place, so a surface to draw on is never far away.”

Your best tip or trick for managing everyday work and life. (Help us out, we need it.) “Timebox your communication tools to predefined blocks. The business world wants to drown your creative mode in process. Push back. Train people to expect that you’ll primarily be away from a device during the day. Force them to communicate with you face to face. Slack is great if your people aren’t nearby, but if you have the ability to occupy the same space with people, collaborate off the screens as much as you can.”

Kirk, Picard, or Janeway? “Kirk. Seattle’s EMP sci-fi exhibit has a ton of amazing artifacts from the original, including the Enterprise captain’s chair and loads of tribbles. Somewhat unrelated, William Shatner’s ‘Has Been’ is one of my favorite albums ever.”

Transporter, Time Machine or Cloak of Invisibility? “Never disrupt the space-time continuum, man. For me, it’s only a question of which time travel theory is the most solid. I love ‘Terminator 2,’ but I can’t imagine it holding up for reals. (One timeline has to be the ‘master,’ the original!) Same with ‘Looper,’ which I also loved.”

If someone gave me $1 million to launch a startup, I would … “Create an AI music app, a virtual band member that you could program with some style, tone and behavior settings. A synth with a real-time analyzer/predictive robot musician built in. ‘Blues riff in B. Watch me for the changes and try to keep up.'”

I once waited in line for … “‘Episode I — The Phantom Menace.’ I don’t regret waiting in line because, film aside, it was just plain fun to look forward to the potential of an actual new Star Wars movie with all these other OT fans, all so hopeful just like you. Let’s not talk about what happened next. But the good times are back now in good old 2016.”

Your role models: “Ed Catmull. I have a personal belief that every human is insanely creative, so we in the ‘creative’ teams of the world don’t have a monopoly on crazy cool ideas. Ed is a techie who’s tapped into his inner storyteller. His medium just happens to be on the 3D modeling and tech side of moviemaking, but his insights about how creative people work together in a modern organization are pure gold.

Greatest game in history: “‘Metal Gear Solid Part 1.’ The ultimate ‘sneaking’ game that transfixed me and my 1998 friends with its cardboard boxes to hide in and rewarding you for not killing baddies.”

Best gadget ever: “Walkman. I was a connoisseur in the fifth grade and burned through about 20 sets of the foam-covered over-ear headphones that came with them. It’s why I also loved the iPod, and why the best feature on an iPhone is still the music player.

First computer: “A self-built PC tower. 8 MB RAM. For reference, ‘megabytes’ was a unit of measurement that was once associated with computer parts. I recall recommending a friend use his spare $500 to upgrade to 16 MB RAM as some kind of ‘investment.’ Gulp.”

Current phone: “iPhone SE. The weapon of a Jedi.”

Favorite app: “Korg Gadget for iPad. A dream app for a synth-oriented kid of the 1980s.”

Favorite cause: “I’m a huge fan of never-ending education in the creative field. Groups like our friends at Seattle’s School of Visual Concepts offer a nonstop stream of real-life things to make you a better, more rounded-out creative person, no matter where you’re at in your career. Be an eternal student.”

Most important technology of 2016: “The HTC Vive is the first headset thingy that turned me on to how good VR can be. Can’t wait to see what groups like Valve Software do with it next.”

Most important technology of 2018: “A real flux capacitor.”

Final words of advice for your fellow geeks: “Learn to present to non-techies. The most successful people in the digital realm tell stories and weave adventures about new ideas that can bridge the gap between those that make cool things and those who pay for them. Great ideas don’t often speak for themselves, no matter how cool they are.”