After successfully graduating from Ada, Rush worked in a variety of engineering roles before landing at Algorithmia, a startup that provides a marketplace for algorithms. (Algorthmia was part of GeekWire’s 2015 Seattle 10 class of innovative startups).

Rush works as a developer evangelist and software engineer for the Seattle-based startup. Before Ada, she worked in digital marketing and technical translation. She studied Spanish literature and communications at St. Louis University in Spain.

“Outside of tech, I spend my time volunteering, sewing, and going to live music and techno shows,” she said.

Meet our Geek of the Week and continue reading for her answers to our questionnaire.

What do you do, and why do you do it? “As a developer evangelist I split my time between coding, writing, and outreach. I code demo apps and create sample code for users to help them understand the product and have easy to emulate examples. The writing I do is part documentation and part blogging. For an evangelist, outreach can mean a lot of things but primarily it involves getting developers up to speed on the platform through teaching workshops, giving talks at meetups, and helping out at hackathons. Evangelism provides me the opportunities to flex some of my favorite skills: Public speaking, helping others, pitching, and generating excitement for technology. That’s not to say I don’t love the code part too! I get to create fun demos and come up with creative uses for the algorithms on our platform.”

What’s the single most important thing people should know about your field? “If your company is selling an API, you probably need an evangelist! We speak the language of engineering, but also know how to communicate effectively to bridge the gap between internal engineering and product teams. Evangelism, sometimes called developer advocacy, is a growing field and will become increasingly relevant in the next few years.”

Where do you find your inspiration? “I don’t know if I believe inspiration is a thing you find externally. For me, inspiration, like creativity, comes from hard work, dedication, and intimately knowing oneself.”

What’s the one piece of technology you couldn’t live without, and why? “My laptop. I spend a huge majority of my time on my laptop, whether that’s for work, play, or socializing.”

What’s your workspace like, and why does it work for you? “We work out of a suite in Galvanize. It’s a great space with a lot of friendly people working on cool projects or startups, so I enjoy being able to socialize and meet people who are doing their own thing. We just recently hit double digits for employee numbers so we’re going to have to figure out our next space. I work in front of the left window.” 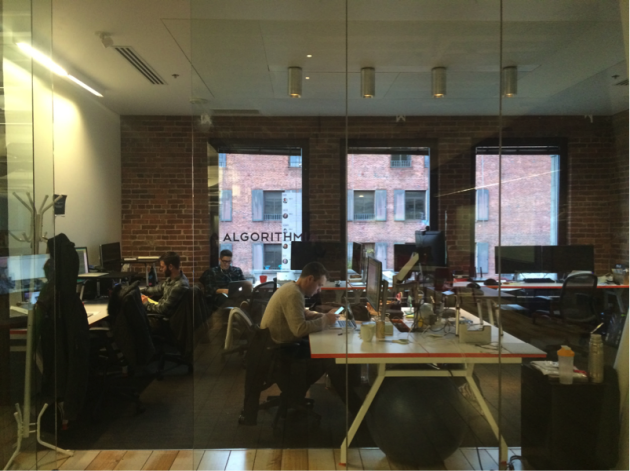 Your best tip or trick for managing everyday work and life. (Help us out, we need it.) “I use Trello to organize everything. I have a board for my personal life, one for work, a board for projects ideas that I am researching or working on, as well as others that are project specific. My life board, aka “todo,” contains lists for reading & learning, volunteer work & code projects, taking care of my home & myself, and miscellaneous items. I review what’s in my done column at the end of each month to evaluate how I’ve been doing before archiving the done list and starting fresh for the next month. It’s important to have a place to put to-do items that involve taking care of yourself so that you don’t de-prioritize or forget them.”

Mac, Windows or Linux? “When I was 13 my older brother John taught me how to partition a hard drive so I ran Windows on one half and Linux RedHat on the other. Mostly I played Tux games on the Linux side, but have since played around with Ubuntu on a few machines. I got a used MacBook 2009 three years ago as a gift and haven’t looked back. Now I use a MacBook Pro both at home and at work.”

Your role models: “Elise Worthy, founder of Ada Developers Academy, for being an amazing mentor and advocate for my career development.

Kara Swisher, tech journalist and executive editor of Re/Code, for her confidence and drive.

Sue and Jim Rush, President & Vice President (respectively) of the business they founded together, Rocky Mountain Environmental Associates; also my parents: for teaching me to treat others with respect and empathy.”

Develop hobbies that don’t involve any screen time. Invest in relationships with people outside of the tech world.

Greatest Game in History “Neko Astume. No really, hear me out on this: It is one of the most emotionally well-designed games. It taps into this childhood emotional state where you not only want to befriend all the animals, but also you can feel unabashed about it. Neko Atsume is a game where you get to watch these wonderfully quirky cats, but they don’t need you and you don’t own them. The game isn’t about caretaking, like the Tamagotchi, but a collection and consumption game. The game is a manifestation of digital consumerism, in which we measure and classify every interaction in order to identify which commodities yield the most profitable results. Because I believe that the waiting and patience are part of the game, I don’t do in-app purchases to speed it up. Even the faults of the app are charming. Add in the frustration and desperation you feel when a cat ignores you and you have a recipe for a very slow-to-unfold emotional rollercoaster. I have only thrown one fit of “why don’t they love me back”s so far. Other fav games include: Grim Fandango, Gone Home, Grand Theft Auto (original only), Oregon Trail, Mario Kart 64, Where in the World Is Carmen Sandiego?, Snake.”

First Computer: “I had to text my mom to ask her. Here’s what she said: ‘You weren’t born yet when we bought our first computer- a Commodore 64. When you were in preschool, we bought an IBM -compatible 8086. You played Oregon Trail, SimCity, etc. on that. Both were DOS computers.'”

Favorite Cause: “I am passionate about ending sexual exploitation of women and children in our community and abroad. Locally, I am extremely proud of the work being done by groups such as OPS and Seattle Against Slavery (SAS).”

Most important technology of 2015: “Chat Bots.”

Most important technology of 2017: “Bioprinting.”

Final words of advice for your fellow geeks: “Develop hobbies that don’t involve any screen time. Invest in relationships with people outside of the tech world. Talk to seniors and children about technology and volunteer in your community.”