Amazon’s net shipping costs reached an all-time high of $1.85 billion during the fourth quarter of 2015 and surpassed $5 billion for the full year — a record expense that illustrates why the e-commerce giant is getting into the business of shipping and delivering packages itself, aiming to cut costs and reduce its reliance on UPS, FedEx, the U.S. Postal Service and others.

The soaring numbers, revealed in Amazon’s annual 10-K filing with the Securities & Exchange Commission, reflect a widening gap between what Amazon charges customers for shipping and what the company pays to send those items through outside carriers.

In the fourth quarter, despite bringing in an all-time high of $2.33 billion in shipping revenue (fees collected from customers) Amazon’s gross shipping costs (the total amount paid to UPS, FedEx and others) also reached a new high of $4.17 billion. The difference resulted in the record net shipping cost of $1.85 billion for the quarter. 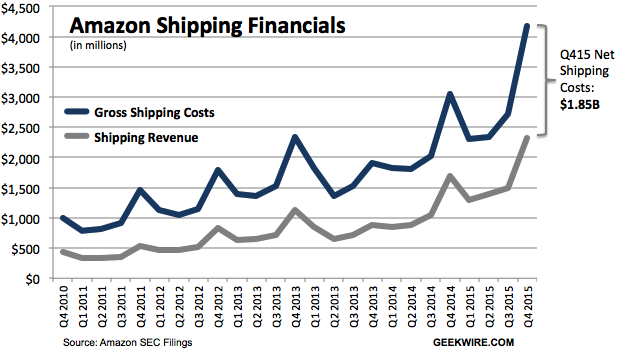 This increase came as Amazon reported a 51 percent increase in Prime memberships in 2015. The company’s membership program offers free two-day shipping to customers as a core benefit, a double-edged sword that boosts Amazon’s overall sales but also increases its net shipping costs.

The record fourth-quarter shipping costs can be attributed to the holiday shopping blitz, when Amazon’s sales and shipping costs traditionally reach their high for the year. Overall sales for the company rose 22 percent to $35.7 billion in the fourth quarter, and despite the rising shipping costs, Amazon was still able to report a net companywide profit of $482 million, more than double its profit from a year earlier.

Amazon was also able to keep one important measure of shipping costs under control: Shipping revenue in the fourth quarter covered about 55.8 percent of shipping costs, the same ratio as in the 2014 holiday shopping season, and significantly better than the low of 36 percent reported by the company five years ago.

While Amazon has historically been willing to sacrifice profits in one sector to invest in overall growth, the company recently has been proactive in its attempts to reduce the financial hit it takes on shipping.

Another move to narrow the gap on shipping costs came in December, when Amazon announced the purchase of thousands of truck trailers to ferry goods between its warehouses and distribution centers.

Amazon has been experimenting not only with trucks, as in the Amazon Fresh delivery program, but also with bicycle couriers, Prime Air drones, air freight, Prime Now delivery, and even an Uber-like crowdsourced package delivery system, called Amazon Flex. All of these experiments in shipping and transportation seem geared toward figuring out Amazon’s own direct shipping program, perhaps ultimately expanding their delivery pilot in San Francisco worldwide.

Amazon CFO Brian Olsavsky said on a call with analysts that Amazon’s trucks, drones, and other investments in its own transport and delivery systems are meant to supplement, not replace, existing shipping partners, Fortune reported last week. But this may not be the case forever, given the scope and scale of Amazon’s investments in shipping and delivery.