Amazon’s decision last year to boost the annual price of an Amazon Prime membership is helping the company’s bottom line by covering more of its rapidly rising shipping costs.

That’s one conclusion from GeekWire’s analysis of Amazon’s shipping expenses, one of the company’s most interesting underlying metrics. Amazon’s cost of shipping packages around the world climbed to more than $2.3 billion in the second quarter, reaching a new all-time high for a non-holiday period, according to numbers disclosed in Amazon’s latest quarterly regulatory filing.

But the company’s revenue from shipping — including a portion of Amazon Prime membership fees, and revenue from Fulfillment By Amazon shipping programs — simultaneously rose to nearly $1.4 billion, covering nearly 60 percent of the company’s shipping costs for the quarter. That percentage also represents a new high, according to GeekWire’s analysis, up from a low of 36.2 percent in the fourth quarter of 2011. 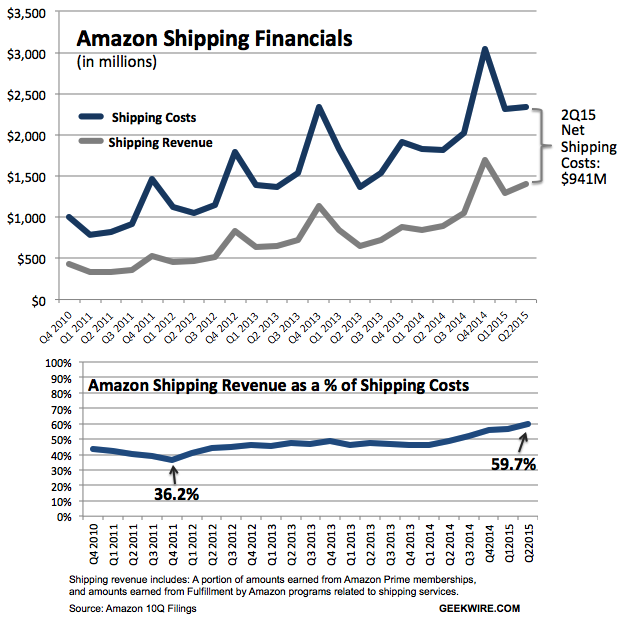 Amazon cited increased shipping costs, including fuel and transportation expenses, as one of the main reasons for its decision to boost the annual Prime subscription fee from $79 to $99 starting last year.

The company was betting that it would still be able to grow its base of Prime members despite the price increase, and that bet has been paying off, with Consumer Intelligence Research Partners estimating that Amazon had 44 million Prime members as of July, prior to the company’s Prime Day promotion.