The best is yet to come you’ll see

But ev’ry once in a while, ya just get lucky

Getting lucky for Michael Wansley meant standing inside the famous Fillmore music venue in San Francisco three years ago with tears streaming down his cheeks. It was several hours until he would perform on stage with Seattle’s suddenly world-famous duo Macklemore and Ryan Lewis, but the realization of what was about to happen over-powered Wansley with emotion.

“I couldn’t stop crying,” he recalled this past week. “I couldn’t believe it was happening. The show went off, and it was magical, it was powerful. For me, it was beyond epic.”

You may not know Wansley by his real name, but rather simply, “Wanz.” He’s the 54-year-old musician who sang the soulful, stuck-in-your-head hook on “Thrift Shop,” a track heard around the world that won two Grammy Awards and garnered nearly 750 million views on YouTube to date.

The last three years have been a whirlwind for Wansley, and much of it a musician’s dream come true. It started inside a recording studio, where Macklemore and Lewis invited Wansley to record the “Thrift Shop” chorus one fateful evening in Seattle. The entire session took 45 minutes, and the rest, well, is history.

Wansley quit his day job and spent the next several months touring the world at sold-out shows with the rap group, performing in his orange-clad suit at places like The Fillmore and on The Ellen DeGeneres Show. There was Melbourne; there was Budapest; there was the Billboard Music Awards; there was Times Square on New Years Eve; there was, of course, Seattle — the list of epic experiences goes on and on.

This week, though, Wansley started a new job — but it doesn’t have much to do with music. Instead of belting out “this is f–king awesome” on stage in front of thousands of screaming fans, the musician will now spend Monday through Friday at a desk inside Tableau Software as a quality-assurance engineer.

A passion for technology, a love for music

Lucky to see, lucky to hear, to smell touch taste this life!

Lucky to be, to have my shot and what I got is life!

Angels devil’s on my shoulders

Both pullin me dif’rent ways, which is the enemy?

Growing up just south of Tacoma, Wash., Wansley spent his early years working at a TV sales and services store owned by his father, a retired army sergeant. He spent nearly every Saturday answering phone calls from people with broken TVs — a job that not only helped Wansley become more tech-savvy, but also cemented his customer service skills.

“I learned how to talk to adults about technical things, and understand their non-technical explanation of what went wrong with their TV,” he said.

But while he liked helping people with their technology questions, playing music was still Wansley’s No. 1 passion as he graduated high school and attended Central Washington University.

After studying Music Education and Business and Promotions at CWU, Wansley picked up a gig at a record store and worked another job as a delivery van driver. He was also helping raise two children.

All the while, he was still writing and performing music in his down time. One day, a geeky friend showed Wansley how to record music on a hard drive — a rather novel concept given the technology that was available at the time.

“I was in a room with a 486 machine running Windows 95, trying to figure out why it was crashing all the time as I’m trying to write music on it,” he remembers. “I wanted to learn more about computers so I could navigate them better.”

I love technology. But I eat, sleep, and poop music. It’s been with me all my life.

Wansley soon got a part-time job at CompuCare and met a colleague who later started working for Microsoft’s digital music team and helped Wansley get an in at the Redmond company as a software tester.

After 11 contracts with Microsoft, Wansley landed what he calls “the best job I ever had” at a healthcare company called Milliman Care Guidelines in 2010. It came with benefits, a nice salary, a great culture, and best of all, Wansley loved the work.

“Testers are necessary because code can’t do everything,” he said. “While it can automate a lot of repeated motions, it can’t tell you what a color looks like or can’t define a user experience. I found a niche.”

Music, though, was still Wansley’s love. As depicted in his music video for “Get Lucky,” Wansley would produce beats and write lyrics on his laptop to and from work each day on the bus while also performing at different shows around town.

So when Ben Haggerty — a.k.a. Macklemore — and Lewis came calling in search of someone with a Nate Dogg-like voice to sing a hook on a hot track they just put together, “Wanz” stepped right up. He would go on to perform a few shows in the U.S. and expected to be back at his everyday job, but that’s when he was asked to go on tour around the world with Haggerty and Lewis.

“I said, you know what, an opportunity like this at my age will probably never happen again,” Wansley recalled. “I had to stay out there and I walked away from my job.”

Find the path that takes me out of this valley

I saw those two make me the one

To take a breath, realize, it’s my choice to fly or die

Almost every dream that Wansley had as a musician came true during that year with Macklemore and Ryan Lewis — the shows, the Grammy Awards, the platinum accolades. He spent much of 2014 figuring out how to channel that fame to really establish himself as “Wanz,” and put out an EP called “Wander” while recording a few music videos.

But Wansley soon realized how difficult it would be to find more success in the music industry.

“I thought those videos would maybe be the catalyst to progress Wanz into a league of his own,” Wansley said. “Well, that didn’t happen. As the spring wore on this year, it was like, you know what, I can’t live off the accolades for a song that was hot in 2012 and 2013.”

So in June of this year, Wansley decided to return to the technology world and began searching around for a new gig. After seeing job postings, he began to get a little worried.

“Two-and-a-half years later, and my testing skills are stale — rust is a kind way of putting it,” he said. “Then there’s the age factor, a flood of Microsoft workers who just got laid off and at the same time it was graduation season with computer science students. I really didn’t have high hopes of finding a position.”

But lo-and-behold, he got a call back from Tableau Software, the maker of data visualization software and one of Seattle’s most successful technology companies over the past decade. Several interviews later, Wansley heard back from the company: You’re hired. 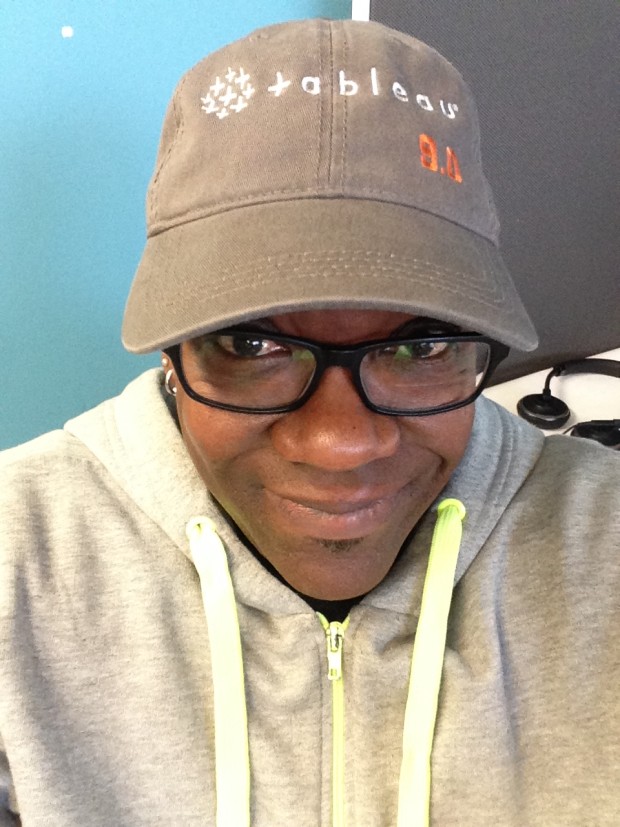 “I’m nervous, but scared is more like it,” he said. “I’m in my early 50s and there aren’t many cats out there who are my age getting new positions.”

Wansley started his new gig on Monday and spent most of the past week attending a new employee boot camp. He knows that his time away from the tech world has put him at a slight disadvantage, with new platforms and devices hitting the market almost everyday.

“I missed out learning how to test those because I was on the road,” he said. “It was like the jungles of India and now it’s the jungles of Africa — but they are both still jungles.”

He’s heard that the environment at Tableau mirrors what he experienced at MCG before taking a one-year hiatus in the music world.

“Their emphasis is on the user, which I like, and testers are the voice of the user — that’s where testers will always differ from developers,” Wansley explained. “Not everybody who uses technology is a technology person. Someone has to be their advocate and someone has to make software usable and understandable so it doesn’t get in the way.”

Chances will keep comin sure as the sunrise ev’ry day

You can chose to sit and watch them pass, or you can grab what’s yours to take

Life is back to normal this week for Wansley. He’ll work on the weekdays as a software tester and spend time in between working on his music.

The way he sees it, the past couple of years have been like Disneyland.

“Now that I’m two years removed from it, it feels very much like when you’re a kid driving away from Disneyland in the car,” he said. “You’ve had all this fun and these experiences, but you’re leaving. Pretty soon you go back home and the teacher asks what you did last summer. That’s what this interview sort of feels like. I’m going back to being a responsible adult and going back to what I knew.” 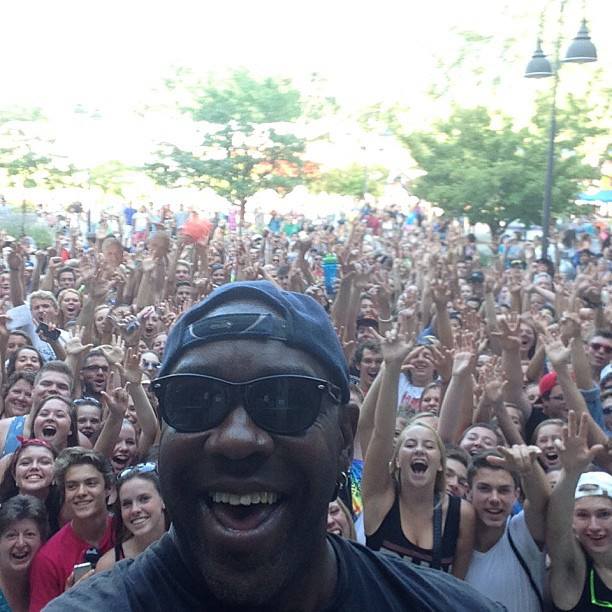 But he had a taste of “Disneyland,” and a taste of what success in today’s music world looks and feels like. Does he wonder what could have been if he stuck to music full-time after the “Thrift Shop” fame?

“Everything that has a beginning and an end is a process, and every process ends,” Wansley said. “So from a technical standpoint, the process of being the singer of the hook on ‘Thrift Shop’ did what it did. But it had to end some time. Nothing is as it was, and it never will be — it’s the nature of progress, the nature of technology.”

Wansley likes to use music and technology to explain some of his philosophies in life — after all, it makes sense given what he’s experienced, and what he looks ahead to in the future.

“Music will never go away for me, and the cool thing is, neither will technology,” he said. “I used to own a bass rig, a drum set, a guitar, and a microphone that fed into a console that fed the tape I would record songs on. Now I can carry everything on my laptop. Music and technology are always going to be there with me.”

Wansley says he’s ready for the next phase of his life.

“Dude, I’m going to be 54 in October,” he says. “I’ve had the experience of a lifetime, and the odds of it happening again … The older you get, the more real life gets. It becomes about what other dreams I have. I’d like to own a house some day and find that person and settle down and take vacations — just get back to what most people consider a normal life.”

His mantra comes through in “Get Lucky,” a song he wrote in 2014, featuring the lyrics sprinkled throughout this story. It’s all about having faith that the best is yet to come — no matter who you are or where you’ve been — and that once in a while, you might get lucky. Wansley is certainly living proof of that.