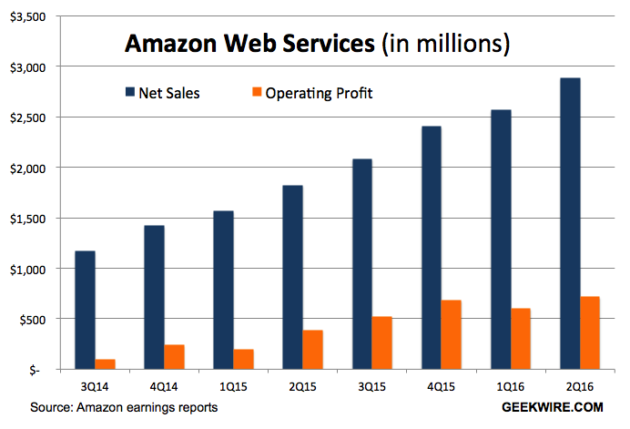 AWS net sales were a record $2.87 billion, compared with $1.82 billion in second-quarter 2015, an increase of 58 percent. Net sales increased 12.5 percent quarter over quarter. Since Amazon first broke out AWS numbers, in 2Q14, AWS has averaged quarter-over-revenue growth of 14.4 percent.

This was the largest dollar-increase in revenue for Amazon Web Services on record, both quarter-over-quarter and year-over-year, said Brian Olsavsky, Amazon chief financial officer, on a conference call with reporters Thursday. The company is “very happy with the top-line revenue and really pleased with the whole business and the work that the team is doing,” he said.

“We feel we’re in a leadership position, and we’re looking to expand that,” Olsavsky said.

AWS operating income for the quarter was $718 million, compared with $391 million in second-quarter 2015. That was an increase of 19 percent quarter over quarter and a whopping 84 percent year over year.

AWS’s quarterly net sales keep it on the path toward topping $10 billion in annual revenue, which Amazon CEO Jeff Bezos in April predicted would happen this year.

In the 10 years since its creation, AWS has become a cloud-services powerhouse. Microsoft’s Azure runs a close second by most measures. Although Microsoft’s commercial cloud business achieved a $12.1 billion run rate at the end of its fourth fiscal quarter ended June 30, Microsoft extrapolated that annualized rate from a month’s worth of revenue — not a full quarter, as AWS does — and on revenue from multiple products, including Office 365 Commercial and Dynamics Online, as well as Azure.

During the quarter, Salesforce selected AWS as its preferred public cloud infrastructure provider, saying that for the first time, it will use AWS for its core businesses, including Sales Cloud, Service Cloud, App Cloud, Community Cloud and Analytics Cloud. AWS announced the Elastic File System, a new service Amazon said that makes it easy to set up and scale file storage. In a Q&A after the release of earnings, Amazon CFO Brian Olsavsky said the company will add nine AWS “availability zones” — geographically separated and physically isolated data centers —  in four regions within the next year. He said AWS has added 422 new features already this year, compared to 722 in all of 2015.