Amazon Web Services has been essential in keeping Amazon profitable. Last quarter, the cloud computing platform accounted for 56 percent of the broader company’s more than $1 billion in operating income.

If AWS’s quarter-over-quarter growth continues at its average pace — a question that will be answered Thursday as Amazon releases second-quarter earnings — then AWS revenue for the second quarter will hit $2.935 billion, putting AWS on a run rate that will easily hit $10 billion for the calendar year. 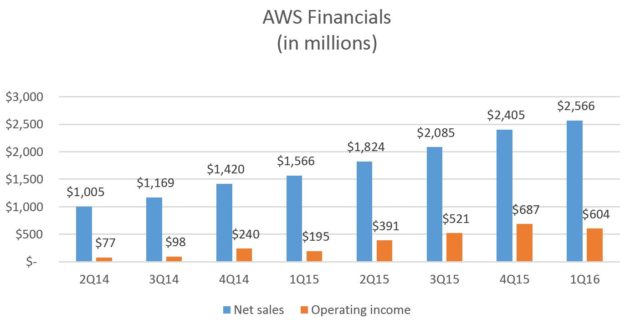 But some financial analysts are questioning whether AWS can continue its torrid pace. Goldman Sachs is expecting AWS revenue growth of 58 percent for the second quarter, compared to the same period last year — down from 64 percent year-over-year growth in the first quarter, according to The Street. The site noted that some pundits believe the growth rate might be even lower. Over the four quarters for which year-over-year data is available, the average increase has been 73.3 percent.

In the 10 years since its creation, AWS has become a cloud-services powerhouse. Microsoft’s Azure runs a close second by most measures.  Although Microsoft’s commercial cloud business achieved a $12.1 billion run rate at the end of its fourth fiscal quarter ended June 30, Microsoft extrapolated that annualized rate from a month’s worth of revenue — not a full quarter, as AWS does — and on revenue from multiple products, including Office 365 Commercial and Dynamics Online, as well as Azure.

Longtime Amazon executive Andy Jassy, who was named AWS CEO in April, made it clear in a talk last month that he still believes the cloud computing platform has plenty of room to grow.

“If you look at the amount of capability today from where we were when we started 10 years ago, it’s just night and day,” he said at the time, noting that Amazon Web Services will launch close to 1,000 new services and features this year alone, up from 70 in its first year. “And yet, we still feel like we’re at the relative beginning.”

Amazon CEO Jeff Bezos wrote in an April letter to shareholders that AWS “this year . . . is reaching $10 billion in annual sales, doing so at a pace even faster than Amazon achieved that milestone.”

Since 2Q14, the first period for which Amazon broke out AWS figures, AWS revenue has grown by an average of 14.4 percent when comparing consecutive quarters. This quarter-over-quarter growth has consistently seen double digits — hitting a high of 21.5 percent in 4Q14 — except for 1Q16, when it reached only 6.7 percent.

Amazon reports earnings Thursday afternoon. For Amazon overall, analysts are forecasting Q2 revenue of $29.55 billion and EPS of $1.11 per share, according Thomson Reuters. Amazon itself forecasts second-quarter net sales of between $28 billion and $30.5 billion and operating income of between $375 million and $975 million. The company’s big Prime Day sale took place after the quarter ended, so those numbers won’t be included in the results.