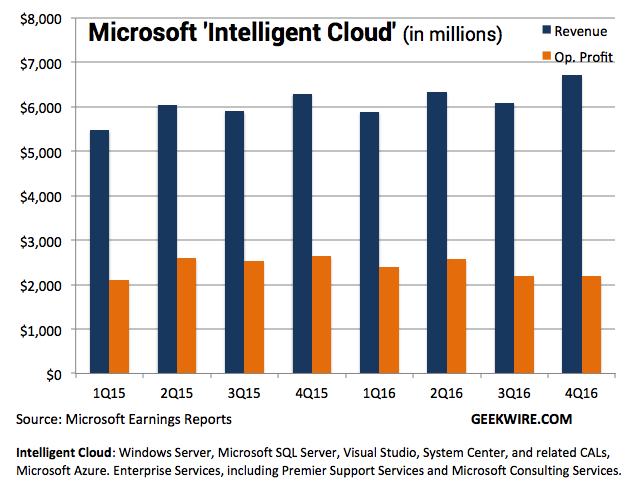 Microsoft this afternoon posted an annualized run rate for its cloud offerings of more than $12.1 billion based on its fourth fiscal quarter ended June 30, an increase of more than 20 percent over the $10 billion annualized run rate it figured after last quarter’s earnings. The Redmond, Wash.-based software giant posted quarterly revenue of $20.6 billion and net income of $3.1 billion.

“This past year was pivotal in both our own transformation and in partnering with our customers who are navigating their own digital transformations,” said CEO Satya Nadella in a statement. “The Microsoft Cloud is seeing significant customer momentum, and we’re well positioned to reach new opportunities in the year ahead.

Nadella last spring set as a goal hitting a $20-billion annualized run rate for cloud revenue in fiscal year 2018. “We still feel good about that goal,” said Zack Moxcey, Microsoft’s director of investor relations, in a call after earnings were released. CEO Satya Nadella said the same thing in a call briefing analysts and press.

Microsoft calculates its commercial cloud’s annualized revenue by taking revenue in the final month of the quarter for Office 365 Commercial, Azure, Dynamics Online, and other cloud properties, and then multiplying by 12.

Amazon, Microsoft’s biggest competitor in the cloud arena, does something similar for its market-leading Amazon Web Services, multiplying the most recent quarter’s revenue by four. Amazon CEO Jeff Bezos wrote in an April 2016 letter to shareholders that AWS “this year . . . is reaching $10 billion in annual sales, doing so at a pace even faster than Amazon achieved that milestone.” But, despite appearances to the contrary, Microsoft’s Azure hasn’t beaten Amazon’s AWS. That’s because Microsoft’s run rate includes much of what it makes available for use online, including some versions of Office 365 and its Dynamics Online CRM offering, while Amazon’s includes only AWS.

Azure revenue alone was up 102 percent year over year, though Microsoft didn’t provide the numbers behind that gain. Revenue from Azure premium services, such as an enhanced version of Active Directory, grew by triple digits for the eighth consecutive quarter, and compute usage more than doubled year over year.

Nadella said more than 80 percent of the world’s largest banks are Azure customers. He said companies are drawn to Azure because it “reflects the realities of today’s world” with high data security and connectivity among regions; it offers high-level services such as predictive analytics; and it is increasingly popular with developers, offering a container service and working with tools from Docker and Red Hat, among others.

Intelligent Cloud segment accounts for most of Microsoft’s cloud offerings. It includes Azure as well as public, private and hybrid server products and cloud services; Windows Server; SQL Server; and support and consulting services. That segment accounted for 33 percent of Microsoft’s fourth-quarter revenues, up from 29 percent from the year-ago quarter and up 30% from last quarter.

Revenue for the Productivity and Business Process segment hit $6.9 billion, up from $6.7 billion a year ago and from $6.5 billion last quarter. That segment includes Office Commercial, Office Consumer, and Microsoft Dynamics software, all of which in some versions are usable online.