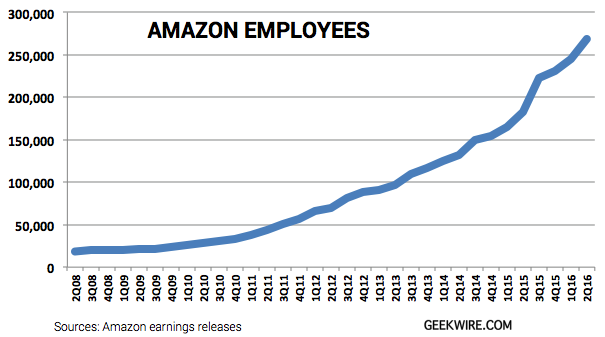 Amazon said it added approximately 23,700 employees worldwide in the second quarter, bringing its total employment to 268,900.

Amazon’s headcount has grown by a staggering amount over the last few years. Its employment numbers increased close to 10 percent in the last three months and 47 percent over a year ago, when its employee count stood at a paltry-by-comparison 183,100 people. That’s an increase of 85,800 employees in one year — more than the entire city of Bellingham, Wash.

“If you look at non-ops related employees — essentially everyone else — that growth rate, while strong, is below our revenue growth rate, so we are seeing some leverage,” he said.

Amazon’s headcount includes full-time and part-time workers at the company’s fulfillment centers but does not include seasonal employees.

Amazon released its second quarter earnings Thursday and said its net sales rose 31 percent to $30.4 billion, coming in at the high end of its own forecast and significantly exceeding Wall Street estimates with earnings of $1.78 per share.