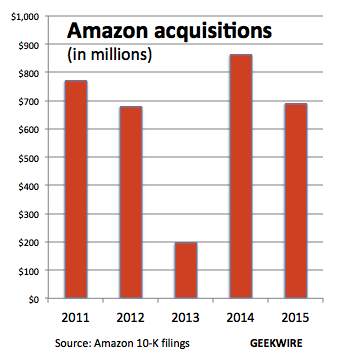 Amazon spent a total of $690 million on acquisitions in 2015, most of it in cash, according to the company’s annual 10-K filing with the Securities and Exchange Commission today.

The total was actually down from 2014, when the Seattle-based e-commerce giant spent $862 million on acquisitions, including $842 million in cash on the purchase of live streaming site Twitch. Amazon still spent a considerable sum to buy other companies in 2015 but spread its money around on a wider variety of deals.

Amazon doesn’t disclose the number of deals or the names of any of its 2015 acquisitions in the filing, but we know most of them based on reporting by GeekWire and other news sites.

One of the company’s big acquisitions in 2015 was Israeli chipmaker Annapurna Labs, purchased for a reported price of $350 million, which was not confirmed by the company at the time. Another was Portland, Ore.-based video processing company Elemental Technologies, which was acquired for $296 million, considerably less than the $500 million originally reported.

Acquisition patterns like these at big companies are watched closely by early-stage technology investors and startup founders assessing their prospects for eventual exits.