Today, almost everyone has a smartphone — which means almost everyone is an amateur photographer. But that wasn’t the case in 2007, when Portland natives Tekin Tatar and Kemal Ozisikcilar founded photo editing tool BeFunky.

Still, they anticipated the increasing need for a user-friendly photo editor in the digital photography age. They started by launching web-based tools in 2009 and the initial service attracted one million users per month.

“BeFunky was founded … with the idea that photo editing and graphic design should be made easy — that you shouldn’t have to buy expensive, complicated software to be able to create stunning images,” said Tartar, the company’s CEO.

We caught up with Tatar for this Startup Spotlight, a regular GeekWire feature.

Explain what you do so our parents can understand it: “BeFunky is a powerful photo editing and graphic design platform that can deliver results similar to those of Photoshop, but without the complexity.”

Inspiration hit us when: “It was late 2006, before iPhones or smartphones, when we became aware of the explosive use of point-and-shoot cameras to take photos. There were no practical means for improving the quality of the billions of these images. The standard Photoshop option was too time-consuming, expensive, and skill-dependent to interest the vast number of picture takers. So, since we were convinced that demand was strong enough in this one emerging segment alone, we set out to design a simple, quick, and creative application that would satisfy this unmet need in the photo editing market.”

VC, Angel or Bootstrap: “We’ve accomplished all these instruments in BeFunky’s life cycle, which leads me today to believe in bootstrapping first when you are starting, and raising money later when you reach a milestone. We bootstrapped BeFunky for the first 16 months. We brought our savings and sweat equity to the table, and also got money from our family.

While bootstrapping, you have to be creative with scarce resources, which keeps you extremely sharp to build up your product and vision. However, there are certain high-risk times during this period that you have to be really careful, otherwise, your startup can die in a day. It becomes deadly when you don’t have a safety net on your cash-flow and your business is hitting a wall.

Challenges will differ for every startup, but in our case, we hit a wall when we grew more than we expected and started to have huge expenses with little revenue on the side. Three weeks after our public launch, BeFunky was featured on the main page of Digg and that night we saw 30,000 visitors in three hours. Our servers crashed in a period when cloud computing and services like AWS were just babies. So we had to lease more servers and buy more bandwidth to continue our services. We had to get a personal bank loan the next day to prevent the company from dying. That was the point we decided to seek outside capital and contacted VCs.” 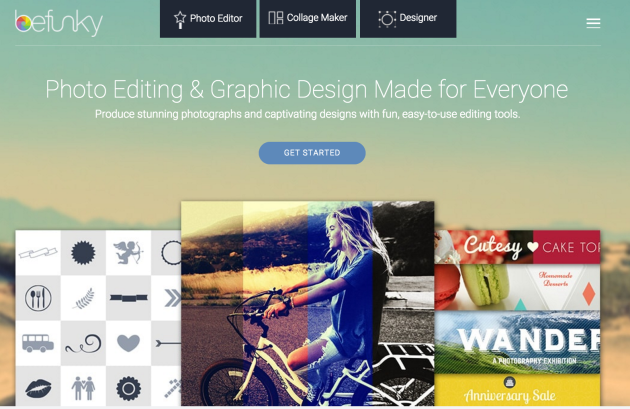 Our ‘secret sauce’ is: “Our main ingredient for the secret sauce is our powerful image-processing technology, which simplifies the process for everyday users that a professional photographer or digital artist goes through.

The foundation of the secret sauce lies in our obsession with details. Details all add up to a perfectly crafted product, which turns ordinary things into something beautiful and meaningful. We believe that by ignoring small details we can’t address the big issues.”

The smartest move we’ve made so far: “We started monetizing early and became cash-flow positive even when we raised venture capital. That is why BeFunky was able to survive during the aftermath of the 2009 national financial crisis where capital-intensive startups that did not have a monetization strategy died due to lack of capital.

For consumer startups, there is the widespread philosophy of ‘grow first, monetize later.’ There is no argument that having a large number of users is very critical. However, this does not mean that you should not be taking the necessary actions to move into some revenue generation early. As you create an MVP you could also build up a Minimum Viable Revenue model.”

The biggest mistake we’ve made so far: “Having two different offices (in the U.S. and Turkey) and a team that was working in a 10-hour time zone difference. That is why I am not a believer in distributed teams that are spread across geographical boundaries and time zones. Maybe there are teams that can effectively work like this but it did not work for us. We lost more than a year of efficiency until we united everyone in the U.S.”

Would you rather have Gates, Zuckerberg or Bezos in your corner: “Gates! A big time fearless risk-taker in an era when it was very hard to start a tech company. He started Microsoft as the first personal computer software company. Most people thought it would fail. We could be extremely disruptive in the market with his passion and experience.”

We had to get a personal bank loan the next day to prevent the company from dying. That was the point we decided to seek outside capital and contacted VCs.

Our favorite team-building activity is: “Doing lunch as a team every Thursday.”

The biggest thing we look for when hiring is: “The ultimate combination of smart and passionate. Startups demand a good foundation of people. Skills can be learned but character can’t be changed.”

What’s the one piece of advice you’d give to other entrepreneurs just starting out: “I think one of the most interesting things I’ve learned while growing BeFunky is that bigger teams don’t mean better teams when it comes to productivity. This does not mean that teams should not grow, but companies have to keep this mindset when setting their footprint. Growing our team to 10 helped us to create a larger footprint in the market with applications on web, iOS and Android. But all of the core product value propositions were structured when we were a much smaller team. We built and are still building on the top of this structure. So the advice would be ‘stay small as long as you can.'”