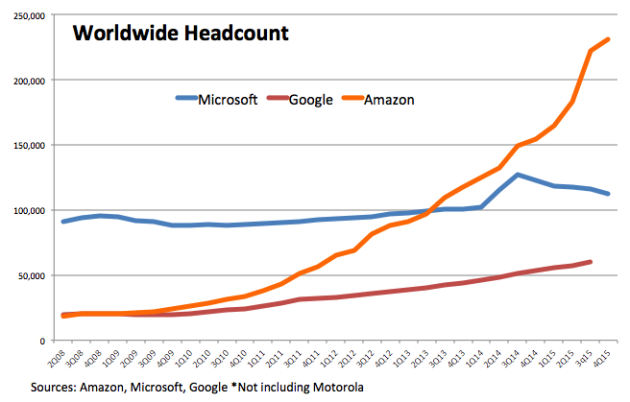 Amazon continued to expand its employee base in the fourth quarter, adding 8,400 people to top 230,000 full-time employees worldwide, not including seasonal workers. The number includes employees at Amazon’s headquarters in Seattle in addition to its distribution centers around the world.

The company disclosed the new employee count as part of its quarterly earnings report today. The e-commerce giant missed revenue and earnings expectations for the quarter, and its shares were pummeled in after-hours trading despite strong trends in Amazon Prime memberships and Amazon Web Services revenue.

Microsoft, meanwhile, says its overall global employment was 112,388 as of Dec. 31, a decrease of more than 3,500 since the September quarter. The company said last July that it was cutting 7,800 jobs as part of a broader restructuring, and those cuts often take several months to show up in the numbers.

Microsoft beat revenue and profit expectations in the December quarter, thanks to strength in its cloud computing and Surface businesses.