This follows the 20 percent dip that Zulily saw in February after posting a disappointing fourth quarter earnings report.

The company’s current stock price is about $9 below its initial public offering price from November 2013. Just 12 months ago, Zulily was soaring, reaching $72.75 per share. But in the past six months, shares are down more than 60 percent.

Despite revenues that hit $1.2 billion last year, Zulily is struggling to meet expectations. A stock repurchase program of $250 million has left some industry watchers scratching their heads, an unusual move for a growth company of Zulily’s age.

One of the other big reasons for Zulily’s slumping stock price was a projection of 2015 revenue of $1.5 billion to $1.65 billion.  That’s a growth rate of just 25 percent to 37.5 percent, far below the company’s historical growth pattern (revenues grew by 72 percent in 2014).

The company, started by Blue Nile veterans Mark Vadon and Darrell Cavens five years ago, announced in February that CFO Marc Stolzman was leaving the company this month. Meanwhile, Zulily is also facing two separate investigations from shareholder rights law firms that are looking to dig into the circumstances around the earnings miss last quarter. 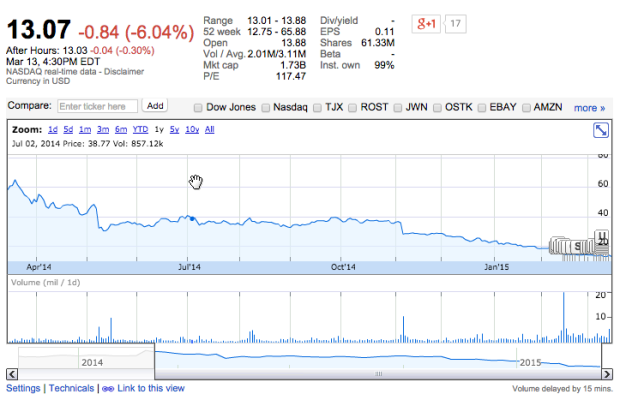