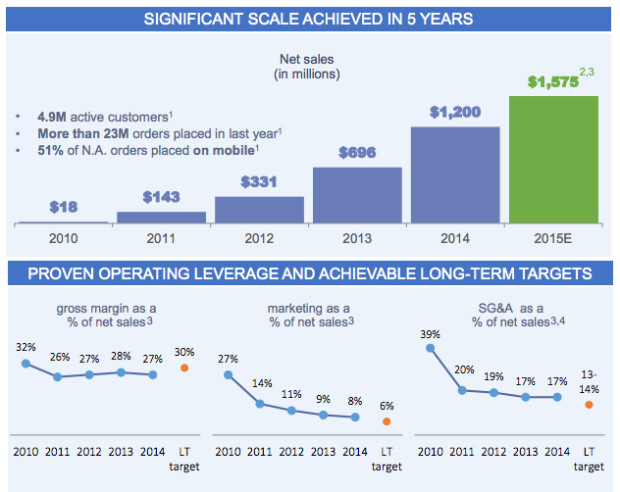 Zulily achieved $1.2 billion in annual sales during 2014, a significant milestone for the Seattle online retailer.

But don’t tell that to Wall Street, which has been hammering the stock in recent months, pounding it well below its initial public offering price.

The stock fell further in after hours trading Wednesday after the company — started by Blue Nile veterans Mark Vadon and Darrell Cavens — reported earnings that missed analysts expectations. The company reported fourth quarter revenues of $391.3 million, up 52 percent over the same period last year. That was slower growth than the previous quarter, when Zulily saw revenues jump 72 percent, and it was below the $406.5 million that analysts anticipated.

Zulily previously offered revenue guidance for the fourth quarter in the range of $391.3 million and $416.3 million — so its performance came in at the absolute bottom of its own expectations.

Zulily finished the year with 4.9 million active members, up from 4.5 million at the end of the third quarter.

In order to jumpstart the stock, Zulily’s board today authorized a $250 million stock repurchase program. It also announced that CFO Marc Stolzman, who joined Zulily in 2012, is leaving the company.

“We closed out the year with significant growth across the business. We increased year-over-year net sales by 72% and drove strong profitability,” said Zulily CEO Darrell Cavens in a statement. “Our goal is to build zulily into one of the most innovative and profitable consumer retail internet businesses of our time. We have set clear business priorities for 2015 that will create an even better experience for our customers while also leveraging the strong unit economics that we’ve been building in the business to continue to deliver surprise and delight to our customers each day.”

For 2014, Zulily reported sales of $1.2 billion, a 72 percent increase. Net income for the year was $14.8 million. It finished the year with approximately $373.8 million in cash, cash equivalents and short term investments.

UPDATE: As of Thursday morning, shares of Zulily are down more than 26 percent, trading at about $14.58.