Fast-growing Seattle e-commerce company Zulily today posted net sales for the third quarter of $285 million and active customers of 4.5 million, an increase in both areas of 72 percent.

And while the company now is on the path to hit $1.2 to $1.225 billion in sales for the year, Wall Street still was not satisfied. Shares of Zulily tumbled 16 percent in after hours trading after the third quarter earnings report.

That could be in part to Zulily’s forecast for the fourth quarter, in which the seller of clothes, toys and home products said it anticipates net sales of $391.3 million to $416.3 million. That’s a growth rate of 52 percent to 62 percent over the same period last year.

Amazingly, roughly 50 percent of Zulily’s North American orders now come from a mobile device — up from 45 percent for the same period last year. The company also hired 500 employees during the quarter, bringing total employment at the retailer to 2,287. With customer service and warehouse workers, Zulily employs a total of 4,100 people, including workers at its large fulfillment centers in Ohio and Nevada.

“This was a strong quarter where we hit several key milestones— the business reached a billion dollars in revenue on a trailing 12 month basis and the majority of our North American orders now come from mobile,” said Zulily CEO Darrell Cavens. “We’ve grown adjusted EBITDA and free cash flow while making upgrades to our technology and infrastructure for scale. Our obsession with offering up great products every day at a great value continues to resonate with our customers, and I’m excited about what more we can achieve in the years ahead.”

For the third quarter, Zulily posted a net loss of $795,000. That compared to a net loss of $4.8 million for the same period last year. For the nine months ended Sept. 30, Zulily showed net income of $4 million.

The company will host a conference call with analysts this afternoon, and we’ll be tuning in for more details.

Zulily’s revenue growth certainly has been impressive since it went public last November under the ticker ZU at $22 per share, as this chart shows. Just for a fun comparison, Twitter posted revenue of $361 million in the third quarter, up 114 percent year-over-year. 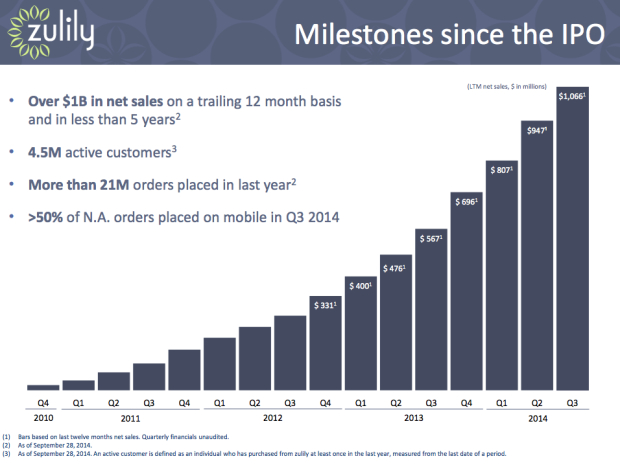 Related: Here’s another example of how Zulily is different from its retail peers: They’re not looking for a ‘big bang around the holiday’…

Email delivery snafus cause headaches for Zulily in Q3, company cuts marketing spending as it works through issues