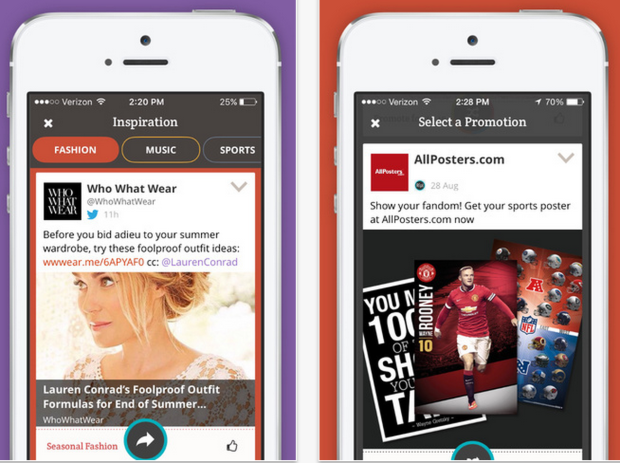 Paul Ingalls and Andrew Wright tried to crack into the sports content business with Fanzo, but the Seattle entrepreneurs quickly realized that their application just was not differentiated enough from other sports-related services.

So, the entrepreneurs — who previously worked together at Redmond-based Smilebox and Seattle-based RealNetworks— did what most entrepreneurs do. They adjusted.

Today, Ingalls and Wright are unveiling a new service called Ripl, which is designed to help social media influencers build their followings and monetize their social streams with targeted promotions.

The name Ripl may ring a bell to long-time watchers of the Seattle tech scene. After all, former Classmates.com executive Bill Messing started a social networking service for college students by that name back in 2006.

Wright sees big things ahead for the new Ripl, so much so that the angel investor is devoting most of his time to the new project as executive chairman.

What makes Ripl unique from other services like Buffer, Tweetdeck, NeoReach, TapInfluence and Izea?

“We are the only ones that help influencers build and monetize their following and enable brands to effectively engage influencers with followings in the 1,000 to 50,000 range that happen to reach the largest audience,” said Wright, who sold Smilebox to IncrediMail for up to $40 million in 2011.

The Ripl app, which is launching today in Apple’s app store, helps social media influencers find original content that may resonate with their specific audiences, and it helps them craft custom posts from photos, text and links with animations in order to help boost the content in social circles. (This is a nod to the work that Ingalls and Wright did at Smilebox, a company that allowed users to create customized greeting cards using personal photos and video).

“They can choose and personalize the ones they like and share them across social media,” Wright tells GeekWire. “We do this by treating promos like other posts and enabling influencers to customize the copy, imagery and overall look for their audience.”

At the same time, Ripl tracks the engagement of these posts — including the number of likes, comments and clicks — and then pays the social media user based on the amount of engagement the posts get multiplied on a fee-per-engagement basis. The content creator keeps the majority of advertising revenue generated through the promotions.

For the most part, brand advertisers have focused their efforts on celebrities with large social followings of one million or more. Ripl is hoping to open the door on those with followings in the 1,000 to 50,000 range.

In a release, Ingalls said that Ripl is designed to help advertisers “find the right experts to advocate their products to the right people.”

Ripl has raised $2.1 million, which includes the capital that previously flowed into Fanzo. The company employs nine people, including Wright.

“I have invested with 12 companies in my angel role and I just thought this was an extraordinary opportunity to create a breakthrough product again with Paul and his team,” said Wright.