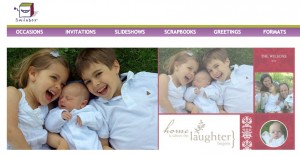 Smilebox, the six-year-old Redmond company that lets users create electronic greetings with their photos and videos, has agreed to be sold to Tel Aviv, Israel-based IncrediMail Ltd. for up to $40 million. The deal includes $25 million in upfront cash, and another $15 million if certain milestones are met.

No big changes are expected as a result of the deal, and Smilebox and its 50 employees will continue to operate from its Redmond headquarters. The company — founded in 2005 by former RealNetworks vice president Andrew Wright — is expected to post about $15 million in sales next year. It is unprofitable.

Smilebox raised about $16 million over the years, including a $2 million round back in February.

If Smilebox does well, “there’s a lot of upside for everyone,” said Wright in an interview with GeekWire.

Even so, at an initial $25 million price tag, the acquisition is by no means a blockbuster. Wright called it a “fair deal,” adding that the probability of hitting milestones is “very good,” likely pushing the value well above that initial $25 million offer.

“It is very fair and it is a good value for the company,” he said. “And, if it turns out that our efforts in mobile and everything else are successful, (IncrediMail) will have gotten one hell of a deal.”

Wright noted that IncrediMail, which is profitable and growing with first quarter revenue of $8.7 million, can add horsepower while at the same time deriving real value from Smilebox.

“We can help to drive the overall value of the company, and it is a publicly traded company, so that is exciting,” he said. “That is very different than going into a scenario where I am 1/100th or 1/1000th of the overall company and it is a strategic deal. This is very much that we are core to this thing.”

There’s been a rise of online services that allow consumers to create online greetings, namely Animoto as well as offerings from more traditional photo sites such as PhotoBucket, Shutterfly and Snapfish.

Wright said there are a number of bigger and smaller players attacking the market, but he thinks Smilebox, with the help of IncrediMail, is uniquely positioned to tackle the opportunity. The resources from the publicly-traded company will be used by Smilebox to expand into mobile — with a new offering expected in the next few weeks — and the launch of a direct-to-home printing service.

“We are really the only ones that do the digital multimedia and the physical, and now we are adding the direct-to-home and we are going to have mobile here in the next short period of time, so I think we are very, very well positioned,” Wright said.

Smilebox inked deals with Hallmark and Walmart, and since launching in 2006 the company said that the software had been downloaded by more than 15 million people and over 180 million Smilebox greetings have been played to date.

Wright said Smilebox could have gone out and raised more money, but that would have placed new expectations on the company, ultimately requiring an exit at a significantly higher valuation. “That takes you into a different class of things,” he said.