It might be hard to believe, but Startup Day dates back more than six years. In fact, it began before GeekWire existed.

Seattle 2.0 founder Marcelo Calbucci launched the event as a way of helping entrepreneurs — including those emerging from the region’s largest tech companies — turn their best ideas into successful businesses. The goal is to empower the startup community by sharing the experiences of people who’ve built companies before, in some cases multiple times.

We’ve always learned a lot from this event, and those lessons have proven even more valuable in recent years as we’ve gotten GeekWire off the ground. It’s a huge help to hear how top people in the tech world manage the everyday business of building a company — everything from the big wins to the difficult mistakes.

So we look forward to this day, and we’re honored to carry on the tradition.

Thanks to the more than 600 of you who joined us Friday for the sold-out GeekWire Startup Day. We heard from Seattle’s mayor, a noted chef, two nationally recognized Entrepreneurs of the Year, and two former roommates who just sold their company for $8.3 billion.

We learned what happens when the cash runs out, and what people do after they leave Microsoft.

And we were introduced to some promising new companies that are trying to make their own dent in the world.

Thanks to our title sponsor, EY, and to all of the sponsors who made this event possible.

Thanks to our speakers, and to the 15 startups that participated in our Startup Demo Zone. That’s where companies had a chance to receive in-person feedback from investors and give one-on-one presentations to attendees.

From that group, three were chosen to pitch on-stage to our VC panel — who picked as their winner the Seattle startup EdRepublic, which is trying to make it easier for companies to identify and hire the best coders.

Congrats also to the People’s Choice Winner, UrbanBin, a Seattle company preparing to launch what you might call the Uber of on-demand storage services.

And thanks to the great group of experts who dished out advice in the Startup Resource Room, where attendees were able to ask questions about finance, sales, law, design, development and many other critical startup topics.

GeekWire staff reporter Taylor Soper pulled together these highlights from Startup Day 2015, in tweets, quotes and photos — starting with one of the recurring themes of the day: company culture.

Lessons from Jordan Ritter founder of Napster, Ivy softworks: 'Culture is the most important thing. Find the right talent.' #gwstartupday

This is great: "You have to be gritty. You have to believe. You can never give up." – Kristen Hamilton, Koru #gwstartupday

Seattle Mayor Ed Murray opened the day by touting Seattle as one of the best cities for startups and entrepreneurs.

“Technology and the IT sector should only grow in Seattle even larger than it is now,” Murray said.

#Seattle has what it takes to be a better home to start-ups than silicon valley: Better talent, investors & quality of life. #gwstartupday

Mayor Murray just disclosed his bet with the mayor of Boston. "We are going to hurt them again on Sunday". #gwstartupday

Unikrn CEO Rahul Sood on preparing yourself for entrepreneurship

Next up was Rahul Sood, Unikrn CEO and a former general manager at Microsoft Ventures, who offered up a bevy of tips to those thinking about making the startup leap.

He also noted how “Seattle is the best place to build a startup company right now.”

“There is no better talent pool on the planet,” Sood said.

Koru CEO Kristen Hamilton on startup culture and having grit

Following Sood was Koru CEO Kristen Hamilton, who spoke about “intentional culture” and confidence at a startup.

“When you’re in a startup, it often feels like you’re running to a cliff … and you have to hope there’s a bridge, or a platform, or a parachute you can grab,” she noted.

Kristen Hamilton on #Seahawks and #startups: remember: "Why Not Us?" And "Always believe in yourself and your team" #gwstartupday

This is great: "You have to be gritty. You have to believe. You can never give up." – Kristen Hamilton, Koru #gwstartupday

Rounding out the early morning sessions was Cheezburger CEO Ben Huh, who revealed some struggles he had with self-doubt and explained what he did to work through that. Huh also shared tips for entrepreneurs and noted that failing at a startup, especially after coming from a large company, is not literally a matter of life or death.

“If you screw up at a startup, the most probable outcome … is that you will get a raise at a bigger company,” he said.

I love this guy. @benhuh When you're in the belly of the beast, the only way out is through." #startup #gwstartupday

Live to learn. Give in to my fears . Find joy in my strengths. Enjoy the grind. 4 tips from @benhuh #gwstartupday

Former Microsofties on making the leap from big company to small

Buuteeq CEO Forest Key, Acumatica CEO Jon Roskill and INRIX CEO Bryan Mistele all share something in common: They are former Microsoft employees who left to pursue their own startups. They talked about the transition away from those big companies.

"Getting something done at MS was like lobbying congress." Ouch. #gwstartupday

Up next was former CEO Rivet & Sway Sarah Bryar, who gave a candid talk about how and why her company ultimately had to shut down, and what lessons entrepreneurs can learn from that experience.

Congrats to #sarahbryar of @rivetandsway for being #candid, #empathetic and #humble abt her start-up journey. #welldone #gwstartupday

Thx Sarah Bryar for sharing how to shut down a co with grace and kindness. #gwstartupday

Just before lunch, Concur co-founders Mike Hilton and Raj Singh spent 30 minutes talking about wisdom they’ve picked up over the past 22 years running the Bellevue-based travel expense management company. Friday also happened to be the pair’s final day at Concur, which was acquired by SAP for $8.3 billion in September.

“As a founder, it’s like giving up your baby — it was gut wrenching, internally,” Hilton said of the SAP acquisition. “It was not easy for any of us. It was very, very difficult.”

Singh also stressed the importance of culture at Concur, and credited it to much of the company’s longevity over the years.

We talk about culture first. We talk about people first. Then we talk results – Concur founders at #gwstartupday

"Live the words that you preach" when you're small. Build your culture the right way & your employees will sustain it. #gwstartupday @Concur

After lunch, we had a chance to hear three pitches from the Demo Zone companies that garnered the most “OfferUp Bucks.” Executives from EdRepublic, Bloom, SERPs, and Surefield pitched to a panel of venture capitalists that included Ignition Partners’ John Connors, DFJ’s Bill Bryant, and Maveron’s Jason Stoffer.

Ultimately, the VCs were most impressed with EdRepublic, a cloud platform that evaluates software development skills using analytics that calculate a suitability index for recruiters. The startup won tickets to the upcoming GeekWire Ping Pong and Anniversary Bash in March, as well as a coveted spot in the Demo Pit area of the Launch Festival in San Francisco.“Every company is becoming a software company, and every company is really struggling with finding, assessing, and securing talent for technical hires,” Connors said. “We thought there could potentially be a real opportunity here and it’s extensible to other technically-oriented jobs that are hard to assess in just an interview.”

After the elevator pitches, the VCs talked about the Seattle startup ecosystem and shared best tips for pitching and raising money.

Startup companies spend way too much time telling us what they do and not enough on why it matters. -Bill Bryant, @dfjvc #gwstartupday

Jason Stoffer on why #Seattle beats the Valley for startups: your team is more likely to stick around here #gwstartupday

Following the VC panel was a unique presentation from Seattle-based chef and restaurateur Ethan Stowell, who shared lessons he’s picked up over the years that all entrepreneurs — in the restaurant business or not — could use.

Ethan Stowell @ESRseattle speaking about entrepreneurship at #gwstartupday @geekwire. The pics behind Ethan are making me hungry.

"Do what you love to do. Success will come later." – Ethan Stowell #gwstartupday

Up next was Jordan Ritter, co-founder of Napster and current CEO of Ivy Softworks, a stealthy “innovation studio” in Seattle that Ritter describes as a “startup that builds startups.” Ritter touched on the importance of hiring the right people at your startup.

"The 3Cs: Culture, Capacity, Craft" Does this hire match our 3Cs? what to focus on when hiring for a startup #jordanritter #gwstartupday

Jordan Ritter: It is better to suffer alone than suffer with fools. But with the right people you will suffer happily. #gwstartupday

Entrepreneur of the Year Smackdown

Last, but certainly not least, was our final session of the day: Entrepreneur of the Year Smackdown.

At the end of 2013, Porch CEO Matt Ehrlichman and Gravity Payments CEO Dan Price were named “Entrepreneur of the Year” by two different publications — Ehrlichman receiving the honor from USA Today and Price picking up the hardware from Entrepreneur Magazine.

Ehrlichman and Price agreed to speak together on stage, and the result was a fantastic look into the way each CEO has built a successful company.

@DanPriceSeattle says if you want to launch a startup ask yourself why, be ready to sacrifice. #gwstartupday

#GWStartupDay: be conscious of how u build the culture. Get definition and early group all in.–Matt Ehrlichman, http://t.co/CsRFaKrDss

And to truly determine who is the real Entrepreneur of the Year, Ehrlichman and Price battled in a geeky paper plane contest, with the Porch CEO out-flying the Gravity Payments chief. 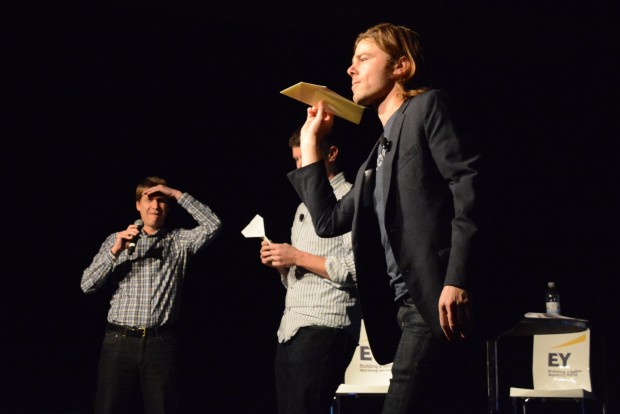 Startup Day wouldn’t have been possible without our sponsors.

So that was Startup Day 2015! Hope to see you at our big Ping Pong & Anniversary Bash on March 26.