Murray opened up GeekWire Startup Day 2015 by talking about what separates his city from others in the world when it comes to starting a company and thriving.

“Technology and the IT sector should only grow in Seattle even larger than it is now,” Murray said.

The mayor first noted the entrepreneurs and investors in the crowd at Startup Day.

“It’s the talent and creativity you bring to this city, state, and to this region,” Murray said. “We have an unusually incredible culture when it comes to just you.”

He also spoke about the University of Washington — “we wouldn’t be as successful without it” — and touted the region’s livability. 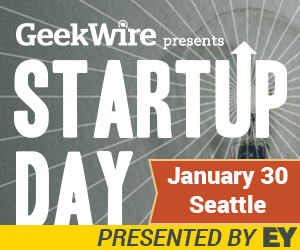 “We have a natural environment that causes people to want to stay here and move here,” Murray said.

Finally, Murray — naturally — talked about public policy. He called the Seattle area “incredibly tolerant” — a place where voters gave women the right to vote before it became a national law, a place where public housing became integrated before anywhere else, a place that has the most diverse zip code in the U.S.

Of course, Murray couldn’t leave the stage without talking about the Seahawks. He made a Super Bowl bet with Boston Mayor Martin Walsh — loser has to travel to the opposing city and complete a day of service.

Murray also had a little Super Bowl zinger up his sleeve.

“When we took [former Boston Chief of Police] Kathleen O’Toole, that hurt them,” Murray said of Seattle’s new police chief. “And now we’re going to hurt them again on Sunday.”

Check back on GeekWire throughout the day for updates from Startup Day 2015.