The eureka moment for John Ralston came when his 13-year-old daughter, Fiona, slammed her head on the field after a violent collision during a soccer match last year. Fiona began stumbling after the incident and crumbled to the ground seconds later. Teammates, coaches, and family soon came to her side, worried how badly Fiona was hurt and what the next steps should be.

She was eventually OK, but the experience rattled Ralston. He knew there had to be a better solution that could help assess concussions — particularly for young people like Fiona. That’s why the Silicon Valley startup vet in November decided to become CEO at X2 Biosystems, a Seattle-startup that is developing technologies to assess concussions in sports, military and work environments.

The company has built both a hardware and software solution that provides valuable data that helps medical professionals determine the severity of a potential concussion and decide whether a player should continue playing. The hardware consists of a small patch worn behind the ear that can sense head impacts. The accompanying cloud-based software has a trove of concussion-related data on individual players and analysis tools that provide insight into how a person has been affected by impact.

Founded in 2010, X2 has raised more than $15 million and is partnering with everybody from the NFL to the military to top-tier research universities that are using X2’s technology to conduct further tests on concussion-sensing hardware and software. For example, during the Super Bowl on Sunday, both teams will be using the X2 Ice assessment software on tablets with real-time tools that help quickly verify or dismiss a suspected concussion and are based on the SCAT-3 standardized protocols developed at the 2012 International Summit on Concussion in Zurich.

Ralston was previously helping advise X2, but once the incident with his daughter happened, he wanted to get involved.

“It just dawned on me that these guys are sitting on a huge opportunity to solve a very critical problem,” Ralston said inside X2’s Seattle office last week.

By now, it is clear that traumatic brain injuries are a serious problem. Whether in sports, military, or industrial environments, methods for recognizing, treating, and preventing future concussions are demanding more of our attention each day.

The effects of head impacts are now widely known, from the NFL paying a $765 million concussion-related settlement suit to former players, to studies that show how participation in youth football may increase risk of future brain injury. But exactly how a team doctor or military clinician determines whether or a not a person should continue his or her work after sustaining impact is where X2 is trying to come up with a solution.

X2’s software, used by the NFL, NHL, MLS, and the Department of Defense, is quite robust and packs a serious amount of concussion protocol tools to help medical teams more effectively monitor impact events and coordinate return to activity. The software is designed to be specific for individual players and allows teams to conduct baseline tests before potential concussion impacts happen, which ultimately helps clinicians assess each individual more effectively.

Heywood said that the software can really help with the recovery process that players who have suffered a concussion go through. He noted a “second impact syndrome,” which happens when someone does not fully recover from an initial impact and then suffers head trauma again — that can lead to catastrophic injury or even death, Heywood said.

“Athletes will always get concussions,” he noted. “There’s not a device in the world that will ever prevent a concussion from happening. But what’s nice is that we can promote the proper return to play, which allows us to keep kids safe in that way.”

Heywood also stressed the importance of standardizing concussion management across all levels of sports, from pee wee football to the pro league. 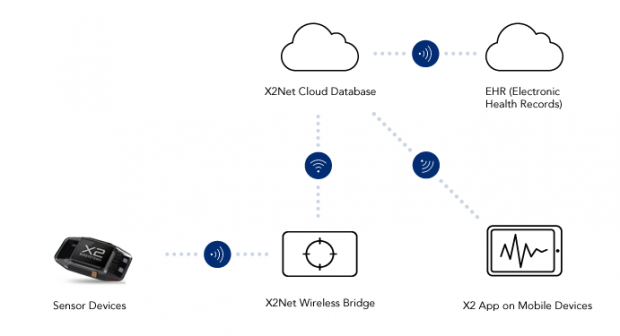 “It’s one of the most important things to keeping our kids safe, without a doubt,” he said. “If anyone changes their protocol to where it’s not safe, those people will be at risk.”

Speaking of standards, Ralston said that there are now concussion-related laws in place in each state, although some say they aren’t strict enough. Still, it seems to be a step in the right direction as far as protecting players — particularly younger athletes who are more at risk for brain damage from impact.

X2 has spent the past five years running clinical studies at universities like Stanford and Princeton to help confirm that its hardware and software solution can help provide data to doctors who can properly assess concussions and prevent players from returning to action before they’re actually ready. Now, with a new CEO in charge and a bevy of partnerships in place, the company is poised to bring its product to the masses.

“There’s an understanding that this is an illness,” Ralston said of concussions. “We have emerged as the company with the most powerful and well-suited technology for the prevention side.”